This Week In Manual Athletics: Sept. 5 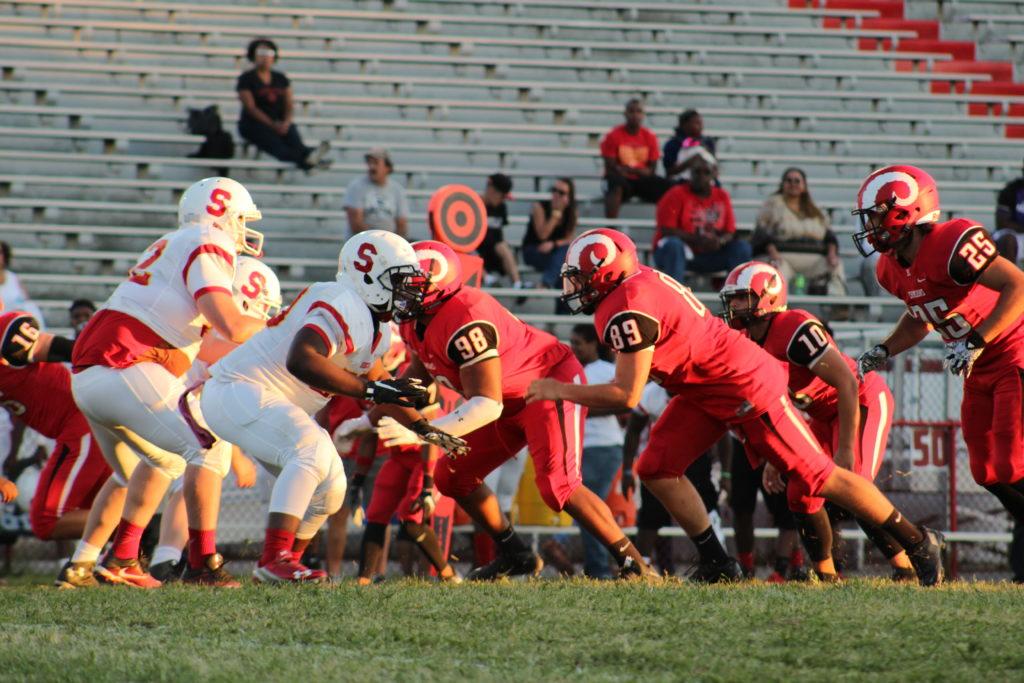 Football
Last week the Crimsons dominated the Seneca Redhawks with a score of 48-6. Andre Teague (6,12) and Marcis Floyd (2,11) led the way with two rushing touchdowns each. Russell Thomas (14,11), Aidan Robbins (29,10) and Jaelin Carter (11,12) each scored one touchdown. The Crimsons are off this week and will resume action next week at Ballard at 7:00.

Girls’ Golf
The Girls’ Golf team looks to continue its strong season as it takes on a tough Assumption squad on Sept. 6. The match will be held at 3:45 at Charlie Vettiner Golf Course.

Boys’ Golf
Last week the Boys’ Golf team beat rival Male by a score of 163-182. Robbie Keyes shot a 71 on Sept. 3 to finish in second place at the Rowan County Invitational. He looks to keep his hot streak going as the Boys’ Golf team takes on Butler at Iroquois Golf Course at 4:00 on Sept. 7. Then the team will compete in the Bourbon County tournament at Houston Oaks Golf Course on Sept. 11.

Field Hockey
The Crimson Field Hockey team competed in the annual Gateway Classic in St. Louis, Mo. over the weekend, which is attended by some of the top teams in the region. The Crimsons went 2-0 in pool play, defeating New Trier and St. Joseph’s Academy. The team hopes to continue its winning streak as the Varsity team plays Holy Cross at Manual Stadium on Sept. 6 at 6:45. The Freshman and JV teams will play against Male at Manual Stadium at 4:15 and 5:30.

Cross Country
The Crimson Cross Country team took last week off. The first race of this week is the Frosh/Soph/JV 3k at Charlie Vettiner park on Sept. 6. Then, on Sept. 10, the Varsity squad will race in the Rumble Thru the Jungle. Hopefully, the week off will provide the Crimsons with the boost they need to have strong showings at both events.

Volleyball
The Varsity volleyball team won both of its matches last week against Seneca and Central. Both wins were critical in order to turn the season around. This week the team looks to continue the winning streak when it takes on Holy Cross on Sept. 6. Freshmen will play at 5:00, JV at 6:00 and Varsity at 7:00. On Sept. 10, the Varsity team will play in the Louisville Invitational Volleyball Tournament at the Ohio Valley Volleyball Center. The JV team will travel to North Oldham High School to play in the North Oldham Tournament.

Boys’ Soccer
The Boys’ soccer team also looks to continue its hot streak as it takes on Central at Manual stadium at 5:30 on Sept. 6. They will have a quick turn-around as they play rival Male the very next day. JV will play at 5:30 and varsity will play at 7:00 at Male.

Girls’ Soccer
The Girls’ Soccer team fell to Assumption in a battle of top-10 teams last week by a score of 3-0. The game was tied until the second half, when Assumption started capitalizing on its chances. The girls look to rebound this week when they play Ballard on Sept. 7. JV will play at 5:30 and Varsity will play at 7:00.