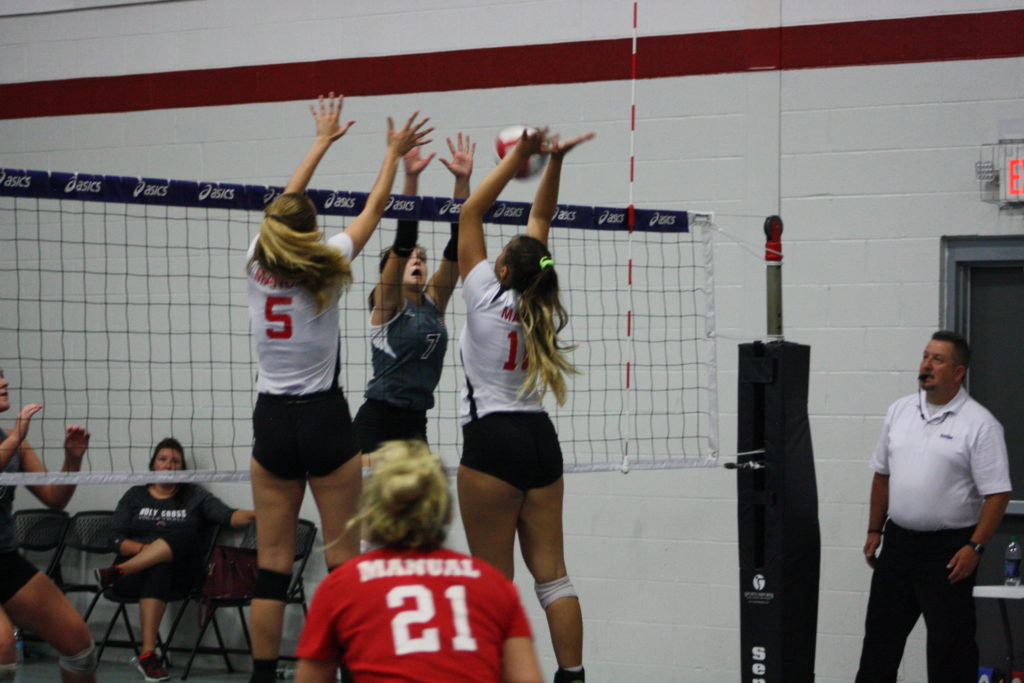 On Saturday, the lady Crimsons volleyball team beat South Oldham in two games out of three in the match, beating them 25-21 and 25-15.

The team later lost to Paul Laurence Dunbar in a three game series, 23-25, 25-19 and 22-25. The match against Dunbar was a constant struggle for Manual, they had a tough time scoring and defending.

“Manual is a very good team and I felt like we were very equal, you know, and it was just a battle the entire time,” Dunbar’s coach, Jenni Morgan, said.

In the last match of the tournament, Manual started off neck-and-neck with Holy Cross, but by the second game the Crimsons had better communication and were working more effectively.

Keely Boldin (21, 11) Manual’s libero, who specializes in defensive play said, “We started to come together as a team after we were down.”

“I felt like we played really well together,” said Josie Grace-Mudd (30, 10). “No one got frustrated at each other and we were really cohesive on the court.”

Manual won three games against Holy Cross last Tuesday. However, the teams they played on Friday were much more of a challenge to beat.

“We played challenging teams yesterday, and I feel like today we stepped up even more,” said Grace-Mudd.

The Lady Crimsons are very hopeful for their future matches.

Boldin said, “I think the rest of the season should be good and hopefully we’ll have a winning season.”

Tim O’Connell, Manual’s coach, wants and encourages more students to come out and cheer on his team.

“I think they would enjoy volleyball if they come and watch it,” O’Connell said. “We play two home games next week, and I would like to see everybody there.”

The Lady Crimsons will have a triple header against Bullitt East this Thursday at Manual.