The Rams wreck the Warriors 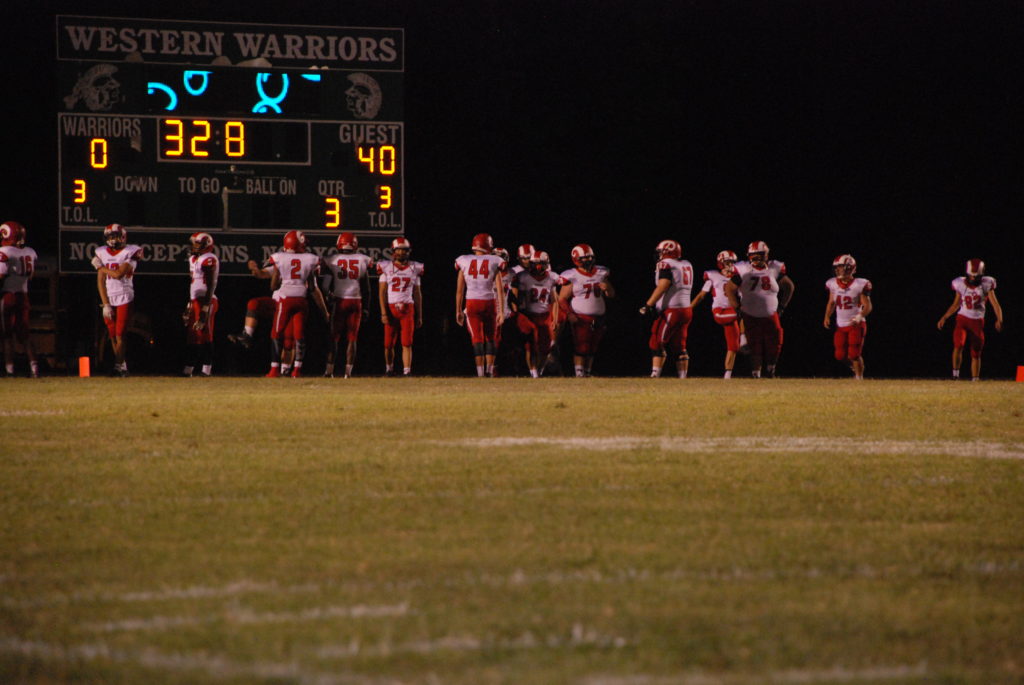 With the Crimsons up 40-0 , they enter the final play of the third quarter.

The duPont Manual Crimsons have a 5-0 winning streak after defeating the Western Warriors 40-6 in an outstanding match Friday night.

After Manual had an early touchdown from Jaelin Carter (11, 12), and a successful extra point by Nick Kopp (9, 11)  in the first quarter, the Crimsons sparked motivation and continued to keep plays going and not let the Warriors score.

“We just have to put in work, and play this team like any other team,” Carter said.

As the first quarter continued the Crimsons put pressure on the Warriors, not letting them advance down the field and keeping them at bay while Manual’s defense put in work.

With about five minutes left in the first quarter, Bryce Cosby (7, 12)  popped his left shoulder out of socket and had to sit out the rest of the game.

“This has happened before,” Cosby said. “I’m just proud of my teammates. I am thankful that we got the victory tonight.”

The Crimsons soon scored their second and third touchdowns of the night by Marcis Floyd (2, 10) and Carter again, both ending in successful extra points by Kopp, bringing the score to solid 21-0 at the end of the first quarter.

After the Warriors suffered a personal foul in the second quarter, they were pushed back 20 yards on a fourth down, forcing a punt return.

The Crimsons took this opportunity to get the ball at first and ten. They followed this up with a big touchdown on the play by Carter and an extra point by Kopp, bringing the score to 27-0 with five minutes left in the half.

Shortly after Carter scored his third touchdown of the night, he managed to get two more back to back touchdowns in the time span of five minutes, this made the score to 40-0 at halftime.

After the half, the Crimsons played a strong defensive game, not allowing the Warriors into the end zone at all in the third quarter.

“The guys got up on them early, we tried to get as many guys in during the second half,” Coach Motley said.

Manual kept the game alive by never giving up and maintaining a strong defense. Dalen Horton (74, 11) a defensive tackle on Manual’s team knew it would be tough to restrain Western for the duration of the game.

”We had some troubles, but we always come through,” Horton said.

Manual kept the game at a shutout by not letting Western get any points in the first three quarters. However, Western picked up a fumble by Manual and scored their first and only touchdown of the night, with four minutes left in the final quarter.

Head coach at Western, Torrey Shinholster, wants to, “cut down on mistakes, block better and align the pickups better.”

“We prep for attitude adjustments, whatever went wrong, we are going to fight together instead of fight each other. That’s what we wanted to see tonight and that’s what we got,” Shinholster said.

“We get better every week, we tackle better, we block better, we gotta practice all the little things,” Coach Motley, the defensive back coach said, looking ahead for the season.

The Manual Crimsons will host Butler Traditional High School next Thursday at Manual Stadium for the homecoming football game, with the homecoming dance to follow shortly after the game.