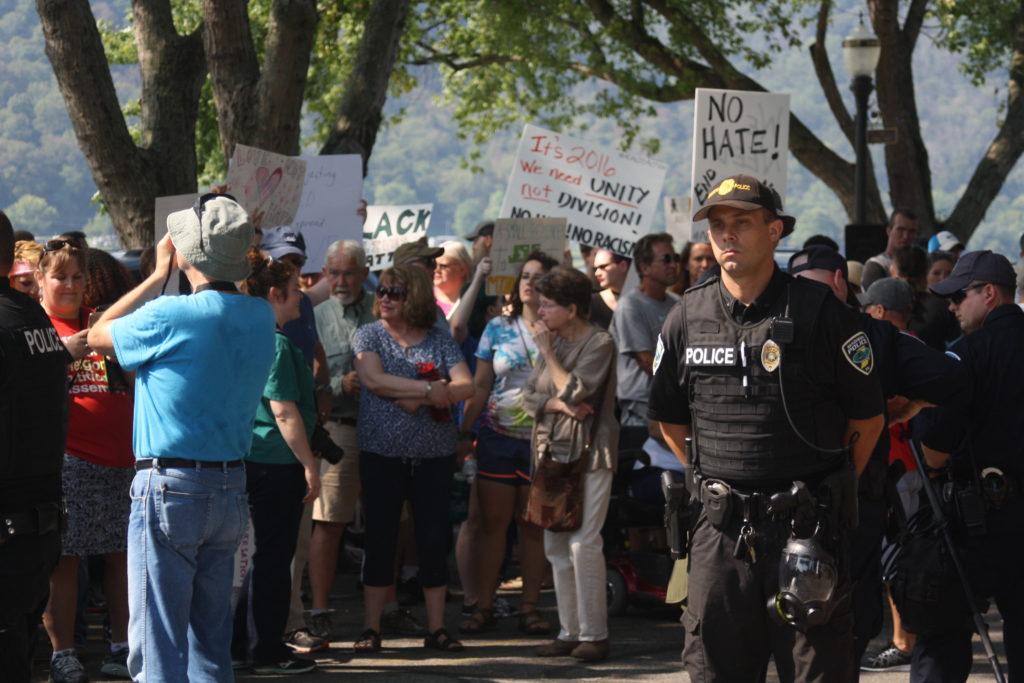 The Ku Klux Klan (KKK) held a rally to protest drug use on Saturday, September 24 in Fireman’s Park in Madison, Indiana. The rally occurred during the Madison Chautauqua Festival of Art, which attracted a lot of tourists to the city.

Students from Hanover College along with organizations such as Freethinkers of Madison and Jefferson County United protested the rally.

Jefferson County United is a group that formed as many of the citizens of Madison’s response to the KKK rally.

Dan Thurston, the Chief of the Madison Police department said there were police officers on standby.

“The KKK has their first amendment rights and freedom of speech. They deliver their message, those that are here to oppose the KKK deliver their message, everyone goes home peacefully and everything turns out great. That’s what we’re hoping for, but it’s difficult to predict when you have such different viewpoints on how things will turn out,” said Thurston.

“The two most important things to our protest were numbers and peace: that it was nonviolent, which it was, and we had huge numbers,” said Nathan Montoya, a member of Jefferson County United, “so it was very, very successful.”

Some of the protesters were there to advocate for the Charter for Compassion in Madison.

“The charter is ‘an international movement for compassion’. Cities such as Louisville, Cincinnati, Indianapolis and Bloomington have signed on to the charter, and we want Madison to sign on as well,” said Montoya.

Jefferson County United is also taking donations in the bookstore, Village Lights, for Casa Amiga (an organization which helps the Hispanic community) and Parents and Friends of Lesbians and Gays.

“I just feel like this is just one of those situations where silence is consent, and I can’t ignore the fact that the Klan is coming to my beloved town,” said Margo Watkins, a member of Jefferson County United.

Protesters sang songs such as “This Land Is Your Land” and “We Shall Overcome” during the protest.

“Music is a powerful way of overcoming negativity and hatred,” said Greg Zisemer, one of the protesters.

Zisemer spoke to the crowd using a microphone and said about the KKK, “Overwhelm them with love.”

Some of the members of Jefferson County United were handing out ribbons to protesters.

“Ribbons were simple, but they also could show everyone we were unified,” said Lillie Leach, one of the people distributing them.

According to Margo Watkins, some of the faculty of Hanover College are members of Jefferson County United, which influenced the students to come to the rally.

“There is a sense of unity and a necessity of equality that needs to be brought upon this community that should not be impeded by the KKK coming here during what is one of the biggest weekends in Madison,” said Giselle Coleman, a freshman at Hanover.

Eric Sharp, a student at Louisville Presbyterian Theological Seminary, joined a few of his friends that heard about the rally through Hanover College’s blog and came to Madison to protest with his alma mater.

“It seemed like a community event of action celebrating the diversity and justice and love in this community. As someone who spent four years of my life here, I wanted to give back and be a presence,” said Sharp, “I want that same sort of love and embracing diversity back at Louisville.”

Roy Heron held a sign for Freethinkers of Madison and handed out flags that he made to the protesters.

“We just wanted to show that Freethinkers of Madison do not appreciate the bigotry or what the KKK represents,” said Heron.
“We don’t want people with dangerous ideas to be left alone without the opportunity to get those ideas out in the open where they can be discussed, where other people have the opportunity to persuade and maybe change hearts and minds.” -Roy Heron
A few of the people at the rally were there to better understand both sides of the rally.

“I think that everyone is open to their opinion. We agree with some of their message,” Karrie Lewis, a spectator, said about the KKK. “We were hoping that they would talk at different intervals so you could hear both sides of what was going on for more information. We didn’t really get that.”

“I did not like how the protesters were chanting “Black Lives Matter”. All lives matter. It’s not just blacks versus whites, and I thought they were rude,” said Lewis.

The KKK were also upset by the protesters chanting “Black Lives Matter.”

“I’ve been in law enforcement for 20 years. I don’t think we need this kind of hate, and I don’t want to see it in my community so I’m here to force my opinion,” said Dia McDonald, a protester who grew up in the 60s in Madison.

McDonald said that she hoped the KKK “won’t come back.”