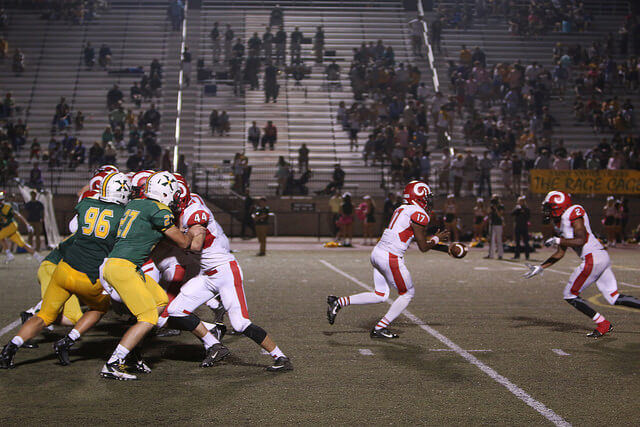 Manual’s football team lost to St. Xavier 28-12 on Oct. 7, bringing an end to Manual’s undefeated status, and marking 28 years since the Crimsons last beat the Tigers in football.

The first play of the game was flagged, setting a precedent for the night which ended with 21 flags, most of which were against Manual.

The Crimsons started strong in the first quarter, with Marcis Floyd (2, 11) scoring the first touchdown of the game.

The Crimsons’ following attempt for a two-point conversion was called back by the referees. Their following kick by Nick Kopp (9, 11) was blocked, making the score 6-0.

Shortly after the start of the second quarter, however, the Tigers scored a touchdown. After a successful Point After Touchdown kick, St. X led 7-6.

The Tigers then used this momentum to continue pressuring the Crimsons. After a series of penalties were called against Manual, St. X scored another touchdown. With the extra point, St. X was leading 14-6.

The Crimsons were not down for the count, however. With about three minutes left in the half, Andre Teague (6, 12) ran the ball for a Manual touchdown. The following extra point attempt was no good, bringing the score up to 28-12.

“It felt great, to put more points up on that board,” said Teague.

Right before the game ended, another series of penalties were called against Manual, including a penalty that negated a touchdown run by Manual’s Jaelin Carter (11, 12).

St. X’s head coach Will Wolford said that he thought his team’s successes early in the second half were key to the Tigers’ victory.

“At the start of the second half, things went our way,” he said. “And I think that made the biggest difference in the game.”

Manual’s linebacker coach, Cameron Palmer, said that the Crimsons’ moral fell sharply in the second half.

“We got down on ourselves, and we just gave up,” he said.

Despite this, Teague thinks that the team can use this loss as motivation to improve.

The Crimsons will attempt a comeback during next week’s home game against the Pleasant Ridge Park Panthers on Friday, October 14.