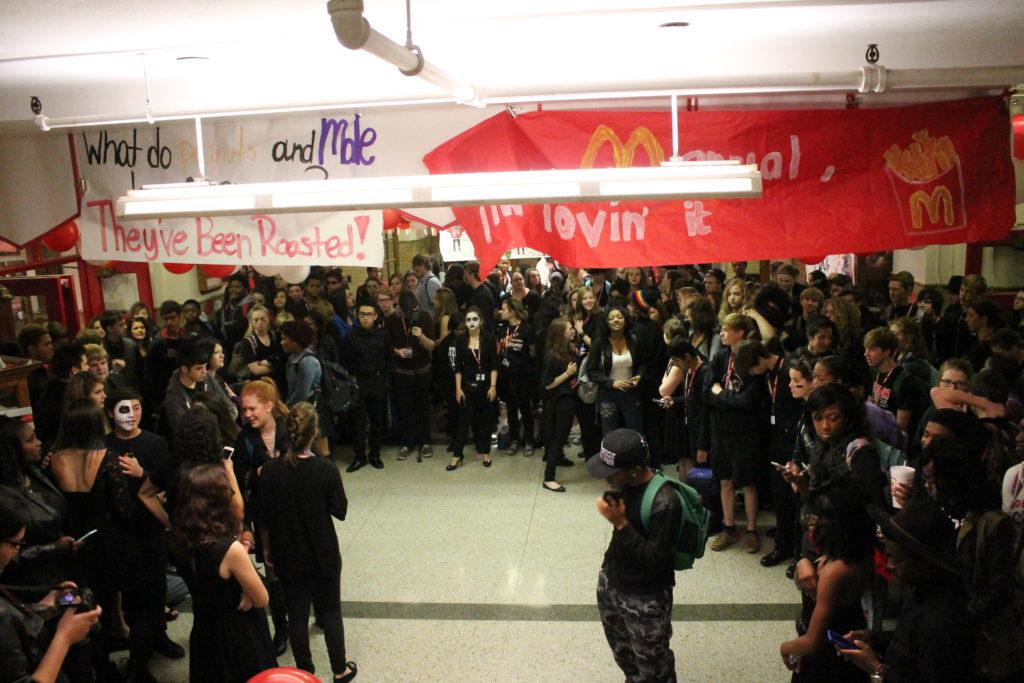 A picture of a bulldog sat amidst black-garbed students gathered around the steps of Center Hall as the squeal of bagpipes faded away. A grim reaper stood in the middle of the mass.

With a feigned Southern accent, assistant principal Greg Kuhn preached the eulogy of Male High School’s mascot, the bulldog: “The fact that we must no longer bear her company is a sure sign of God’s magnificent love for us all.”

By the end, the crowd started chanting. Arms pumped in the air as the students cheered: “All my life I wanna kill a bulldog.” The chanting finally ended with a roar of applause.

Doomsday has been an annual event during the week of the Male/Manual game for years. Currently, the Thursday of Red/White Week is when Doomsday occurs, but it has not always been that way.

In the beginning, the Wednesday of Thanksgiving week hosted the first burial on Red and White Day.

L.J. “Butch” Charmoli, the athletics director in the 1950s, founded Red and White Day. Mr. McDaniel, the alumni coordinator at Manual, wrote that “it was a singular event through tenures of principals.”

It wasn’t until the 1980s that Red and White Day became Red/White Week.

Larry Frederickson, a retired Manual teacher, returned to the school on Doomsday to play the bagpipes.

For the past eight years, Kuhn has written the eulogy, but he ad libs parts of it. He said that he tended to write them with a “funny theme.” This year he is thinking about going with a “James Brown theme,” but believes he may just wing it.

Manual alumna Laura Spiegelhalter, who is also Executive Council advisor, said that as far as planning goes, “we tell everybody to wear all black, and we bury the bulldog.”

She said that Executive Council begins Doomsday preparations as soon as the first week of school.

When Spiegelhalter attended Manual, she stated that it was “exactly how it’s like now.” It was on Thursday of Red/White Week.

But “there was no eulogy. We sang songs and did chants,” Spiegelhalter said.