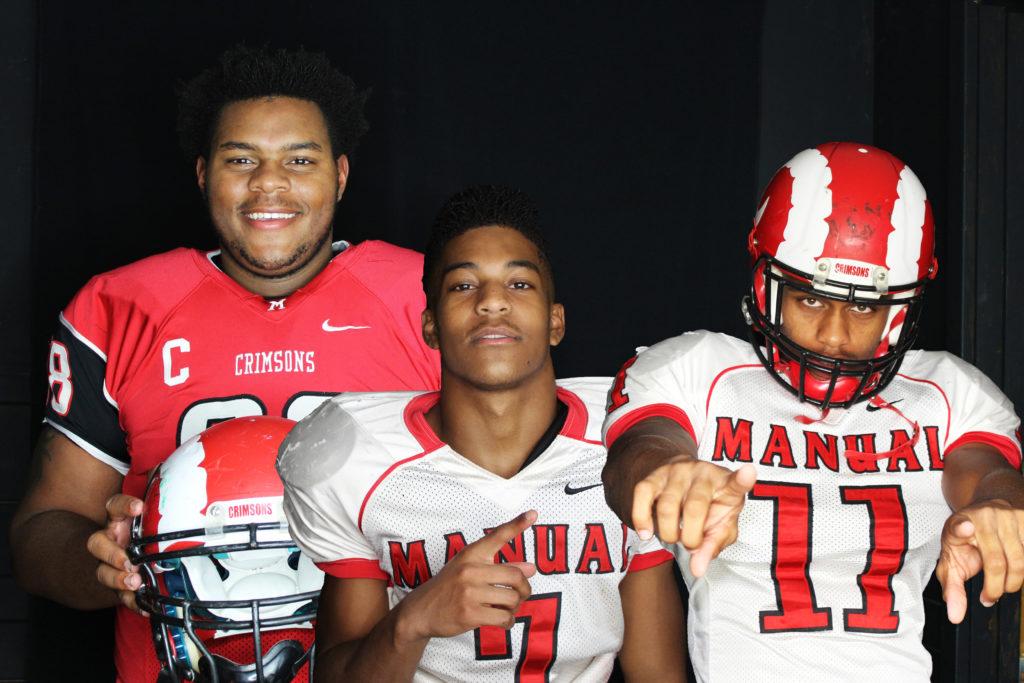 It’s the night everyone has been anticipating for a year. The rematch of one of the biggest—if not the biggest—rivalries in the state. This isn’t your average football game; too much is at stake. First, there’s bragging rights for a whole year, but most importantly, there’s the barrel. The barrel that has been stripped from our school for the last three years. The barrel that this senior class wants back more than anyone because they were the last class of students at Manual to have possession of it.

It takes a certain team with a certain pedigree to win the barrel. This year Manual has what it takes. Manual has the Triple Threat: Jaelin Carter (11, 12), Sean Cleasant (98, 12), and Bryce Cosby (7, 12). And these boys are ready to take back their barrel.

It’s 2014: sophomore year. It’s a cool, crisp fall night with a strong wind. The crimsons are down 21-0. It seems that all hope has been drained from the boys and the student section. It’s second down and Manual is running a slant play. Jaelin (Byrd) Carter explodes down his route, but he takes a huge hit from the Male defense. He’s hurt. He knows it. But his boy Bryce believes in him. He knows Byrd can do it. Byrd lines up again, except this time, he has some chump who he knows can’t guard him one-on-one. Byrd straight beats the dude off a sprint with a sharp cut back, snags the ball out of the air and hauls it into the endzone, scoring the first touchdown of the night for the Crimsons. The crowd immediately regained their spirit, bursting into screams and chants of “I believe that we can win!” Despite this great play and moment in time, the Crimsons would still go on to lose this game.

For these boys, football is more than a sport. It’s a brotherhood, it’s a way of life—it’s the only way. They have been by each other’s side day-in and day-out for about four years now. From summer camps and conditioning to a run at state, they have been there for each other since day one. 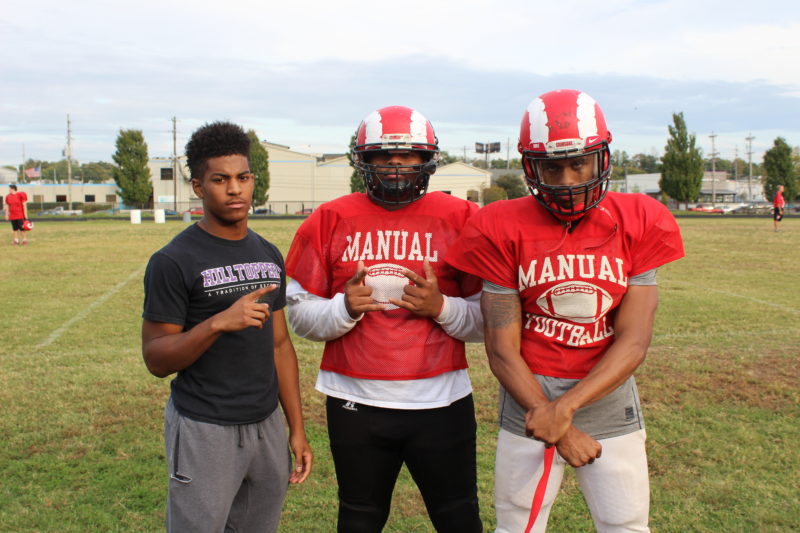 Despite the immense talent each one of these athletes possess, they would be nothing without their family, their coaches and most importantly their mothers.

“My mom provides the most support for me through thick and thin. She’s always at every game supporting and cheering. Even if she hasn’t had the best day, she’s still doing everything she can to support me,” Cleasant said.

According to the Triple Threat, their moms provide never-ending support and are all strong, independent women who have set them on the straight and narrow path to help them get through all struggles they face. Other family members have also had an important role in crafting each of these young men into the people they are today.

“My aunt has just helped out my mom a lot by taking care of me. She’s been there every step of the way, and my dad has just tried to keep me on a straight path and help me become a better man and football player every day,” Cosby said.

“My dad encourages me in everything I do, especially football, because he didn’t make it due to having children. I feel like I can do this for him,” Carter said.

Coaches have also had a strong impact on each of these players. Considering the fact that these boys spend about 12 hours per week with their coaches, they develop an unbreakable bond, a family like-bond so to say.

“Coach Lucas was a big impact in my life as he helped me get to and from practice and helped me with schoolwork and grades. Manual has provided me a house,” Carter said.

Manual is more than a place to just go to school; Manual is a safe haven from trouble and anything that could hurt their futures. Manual has given each boy a home away from home: somewhere where they can socialize, compete and better themselves academically to be the best possible people they can be.

“When I’m not at Manual, I’m not doing anything. Manual is a place where me and my brothers can do what we love,” Byrd said.

“Manual has provided me a great environment; it’s very diverse, and people are very enthusiastic. Everybody supports you academically and athletically. Teachers wanna see you do good on and off the field,” Cosby said.

“Manual has provided me with a good education, being one of the top educational schools in the country, you feel me? It’s good on resumes when you apply for college,” Cleasant said.

Football is more than just a game to these athletes. Football is the foundation to life lessons. It is the stepping stones along the path of manhood. Just like all sports, football instills characteristics in a person that you can’t get from anywhere else. Football has taught how to handle the struggle of adversity, how to compete, how to lose, how to pick yourself up, how to have teamwork skills and so much more.

“The biggest life lesson football has taught me is: “No matter how hard you get knocked down, you still gotta get up and continue fighting another day. If you can look up, you can get up,” Cosby said.

“Football has taught me discipline and how to stay humble because there’s always someone bigger and better,” Cleasant said.

“Football has taught me to take care of myself mentally, be a better person and manage my time. Always keep your family and friends first because they’re there for you when you’re down,” Carter said.

Football has also taught these boys to dream and to reach for the stars. Each of them will be playing football at the collegiate level. Cosby has committed to play for Ball State University, Cleasant has committed to EKU and Carter has several offers, but at the moment he is still undecided. They all also aspire to someday play in the league and make it big time.

“I’d like to ball out and make some money,” Cleasant said.

So, what does the senior-year Manual versus Male game mean to the Triple Threat? It means one last shot to go out and do their thing. It means one last time to play in one of the greatest rivalries in America. It means some final memories being made. It means the end of an era is near. It means it’s their time to grind.

“It means a lot. We haven’t had the barrel in three years. [During] my freshman year, we had the barrel, so senior year we gotta get it back. You know I gotta go out with a BANG!” Cleasant said.

In order for the Crimsons to come out with the win this Friday and to return the barrel to its rightful home, they have to be able to go out there and play for four quarters. They need to all be on the same page, and everyone needs to be performing at their absolute best. The team energy needs to stay up, and the upperclassmen need to step up and act as leaders to guide their younger brothers into battle. It also takes trust. The team has to be able to rely on one another and hold each other accountable for each and every play; they cannot afford to take any plays off.

“I think [after] playing four quarters, we’ll come out with the barrel. Scoring and getting receiving yards, getting yards on special teams and doing what I need to do on any position on the field will keep our team hyped up,” Carter said.

“I rely on probably Will Britt or Keon Farris [the most] because Will is our quarterback, so I have a lot of trust in Will. He knows what he’s doing out there you know. I gotta rely on him every Friday night that he’s gonna put us in the right position. And then Keon Farris, he plays safety, so he communicates all the calls to us as DBs and to the defense so we know what we’re doing. I rely on him a lot,” Cosby said.

As these guys finish up their final Red/White Week and prepare for the final rivalry game, some of the emotions of being a senior are finally hitting. They have all accepted that this is the last chance to go out, have some fun and just play football before they go off and make it big. For now, they are still the 17- and 18-year-old kids who are going out on Friday night under the big lights to impress a crowd of about a few thousand peers and to have fun. In a few months, they will be filling stadiums of several thousand fans and then some. Right now, they are living in the moment and taking it all in.

“I think I’ll miss going out with my teammates; I think about it everyday. It’s crazy that come May or June I’ll be walking across the stage, graduating and going off to college. You know, high-school football is some of the funnest times of your life ‘cause once you get to college, you know it’s more of a business. I’m just trying to have as much fun with these guys as I can right now, but I just think the most fun part will be walking away with the victory and just creating memories that nobody can take away from us forever,” Cosby said.

“It’s one of the oldest rivalry games in America, so you know I like the competition. I’ll miss how big the game was. I’ll miss every reporter and everybody in the city coming out to it. The game was fat [fun]. I’ll just miss playing alongside my brothers,” Cleasant said.

The Triple Cs hope to leave behind a legacy for all the young bucks who follow in their footsteps to remember them by. To each, that is a slightly different legacy, but they all desire to be remembered for their ability and for who they were as people.

“I want my legacy to be a state championship,” Carter said.

“I just wanna be known as somebody who is high in character, a hard worker and a great teammate. My ultimate goal was, ‘if somebody asked if you could play with anybody from Manual, who could it be?’ Answer: Bryce Cosby. I wanna leave this program better than it was when I got it; you know, passing it down to the people below me, I want to leave it with better hands,” Cosby said.

It’s the night everyone has been anticipating for a year. In two days, we will have a victor. One team will walk out head held high, barrel held higher. One last hooah. One last time.