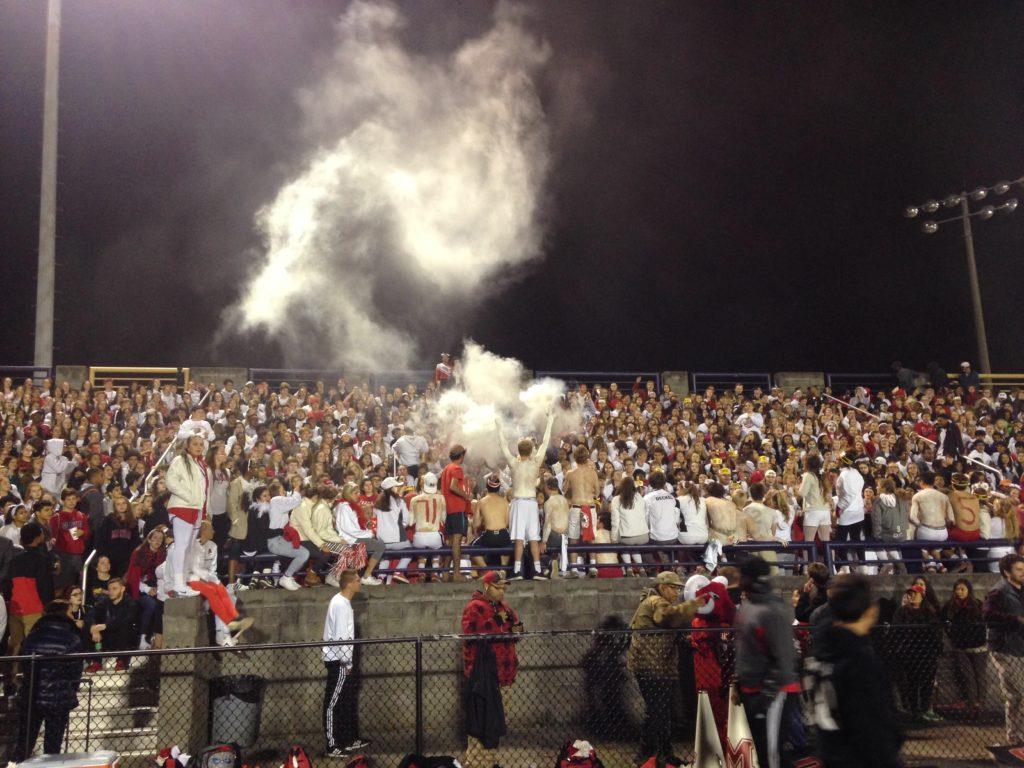 Male defeated Manual 27-14 on Oct. 21 in the 124th Old Rivalry game at Male Stadium, keeping the winning barrel for the third year in a row.

In the first quarter, both teams’ defensive lines played very well, feeling each other out and learning how to contend with one another. As the ball moved from one side of the field to the other, neither team was able to get a steady advantage. The first quarter ended with a tie of 0-0.

In the second quarter, this stalemate continued ferociously. Male began to pick up a lot of penalties at the start of the quarter, but that didn’t stop them from giving the Crimsons fierce competition. Manual came close to scoring when Nick Kopp (#9, 11) attempted to kick a field goal, but the kick unfortunately came up short. Neither team scored until the very end of the quarter, when Male’s Brian Smith (#25, 12) ran 25 yards for a Bulldogs touchdown. After the extra point, the score was 7-0, Male, which is what it would remain until the end of the half, 23 seconds later.

“It was a great feeling,” said Smith. “I just knew I had to make a play for my team, and I just executed it.”

Manual’s offense came back strong at the start of the second half, with a series of successful runs that led to William Britt (#17, 12)  running in a touchdown. After the successful extra point kick by Kopp, the score was tied again, 7-7.

This tie would be short lived, however, as just a few minutes later, Male’s Deion Montgomery (#2, 12) ran in another Bulldogs touchdown; after the successful extra point kick, the score was 14-7, Male, as it would stay for the rest of the quarter.

The Bulldogs started out strongly in the fourth quarter, with Smith soon running in for another Male touchdown. After the successful extra point kick, the score was 21-7, Male.

However, the Crimsons made a comeback, making a powerful series of runs that led to Jaelin Carter (#1, 12) catching the ball in the endzone for a Crimsons touchdown. After a successful kick by Kopp, the score was 21-14, Male.

Despite being behind, the Crimsons weren’t willing to give up. With 26 seconds left in the game, Manual gained possession of the ball. They then made a series of quick, concise runs that brought them ever closer to the end zone. The Crimson student section became reinvigorated, loud and proud, as it seemed like Manual had a chance to take the game into overtime.

However, the Crimsons’ final desperate Hail Mary pass was intercepted by Male’s Nathan Hobbs (#5, 12), who proceeded to run 90 yards to make a final gratuitous touchdown, ending the game with a score of 27-14, Male.

After the game, Manual head coach Scott Carmony said, “I love our guys. I’d put our guys against anybody. I love their fight and how they’re finally starting to get what we’re trying to impart on them. The PRP game got us reenergized, and kinda reemphasized what we like to do: play physical, and run the ball.”

Male’s head coach, Chris Wolfe, said that he was very proud of how his team handled Manual’s offense.

“Manual’s got a fantastic run offense, probably the best I’ve seen in a long time,” he said, “But we have enough stops, and we forced them to do a little bit of what they really don’t want to do.”

But the season’s not over yet, and the Crimsons are looking forward to the upcoming games and playoffs, when they’ll have a chance to redeem themselves against Male.

“We need to reset and get geared up for the playoffs, really put all of our thought and focus on that and get past this,” Carmony said.

“Hopefully we can play them again in the playoffs, and we will. We’re going to win.” says Carter.

The Crimsons’ next game is at Manual stadium against the Eastern Eagles on Friday, October 28.