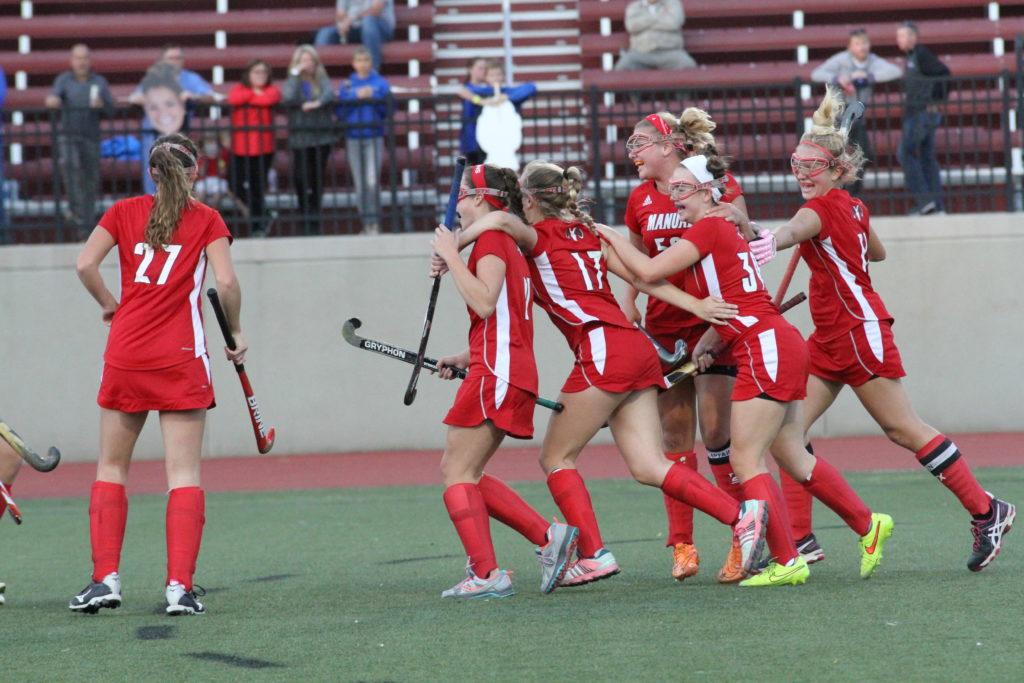 After Biggs scored the only goal of the night, the team celebrated.

The Varsity Girls’ Field Hockey team beat Christian Academy of Louisville (CAL) with a score of 1-0 in the KHSAA state semifinals on Monday, Oct. 24.

At the start of the game, both teams fought with everything they had, but the Crimsons pushed just a little more than the Centurions.

“We were mentally prepared, we were confident in our team and abilities and we believed in ourselves.” Ellie Wheatley (7, 9) said.

Each team pushed and kept fighting until the referee blew the whistle.

Manual’s only goal happened on a fast breakaway from the team, moving the ball up the field; when Sarah Biggs (39, 12) got the ball in the circle, it was all over.

Once Manual scored, the atmosphere of the game changed for all of the fans, players and coaches.

Both teams stepped up on defense and tried their best on offense to get the ball in the circle and to get a corner.

Directly before the end of the first half,  Jordan Thompson (50, 12) got a green card, and had to sit out for the rest of the half and part of the beginning of the second half.

At the start of the second half, the Crimsons started out with the ball and kept pushing into the Centurions’ circle.

Both teams got endless amounts of corner, but both had strong defensive motivation to keep the ball out of the cage.

With the clock running out of time, the countdown began to the end of the game. The Manual parent and student section counted down from 10. Once the buzzer sounded, the field hockey team ran out to the field to meet goalie Bre McWhorter (00, 11) in a celebration to the state championship.

Junior captain Meredith Wickenheiser (11, 11) couldn’t be more excited for the win, “I’m really happy. I’m pumped for the finals, and were not going to down this year.”

The Lady Crimsons will face off against the Assumption Rockets Wednesday, Oct. 26 at 6p.m. in the KHSAA state championship at Bellarmine University.