Assuming the worst in the field hockey state championship 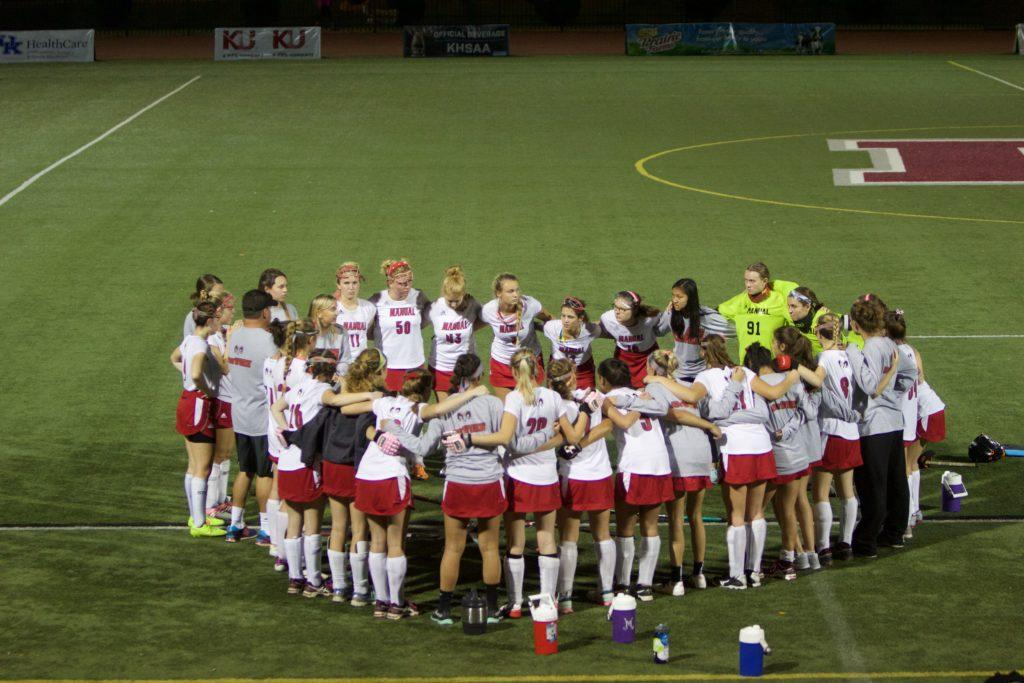 The Crimsons regroup during halftime. Photo by Cicada Hoyt.

The Varsity Girls’ Field Hockey team took a tough 1-0 loss to Assumption on Oct. 26 in a sudden death overtime in the KHSAA state championship game at O.B. Frazier Stadium.

This is the team’s second runner-up title in the past two years, after losing to Sacred Heart Academy last year in the finals. 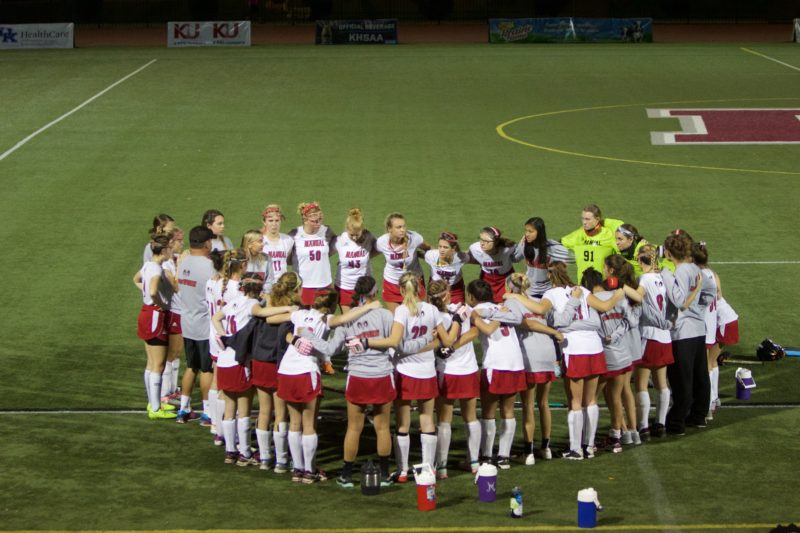 “We wanted to leave it all out there [on the field] with no regrets,” Sarah Biggs (#39, 12) said, “These are the best girls I could’ve played with. I love them to death and I wouldn’t change a thing.”

At the start of the game, both teams started strong, each pushing up the field, passing fast and trying to not let the other team get the ball from them.

Manual received many personal fouls in the first half. Biggs received a two minute green card and Meredith Wickenheiser (#11, 11) received a five minute yellow card, causing the Crimsons to be down a field player for a total of seven minutes during the first half.

The game remained scoreless going into halftime. During the first half, the Rockets out shot the Crimsons 5-1 in the circle.

Both teams started off the second half as if it were a new game. Each team received more corners, blocked shots, passing and playing as a team.

Unfortunately, the game remained scoreless at the end of regulation play, and the state championship game went into a sudden death overtime.

During this overtime time period, each team is only allowed six field players and one goalie on the field for a ten minute period; the first team to score in this overtime period would be the new state champion.

The Rockets got the ball at the start of the OT period and quickly made a fast break down the field.

Debbie Judd, head coach for the Rockets, knew the game would be fought hard. “Their coach does an excellent job getting them [Manual]  prepared for this Tournament.” Judd said, “We did not underestimate them by any means. “

After drawing two corners during the OT period, the Rockets had their third and final corner. This time, Lee Ann Gordon for Assumption drove the ball in the back of the net, causing the final score to be 1-0.

The Assumption Rockets became state champions for the third time in the past four years, while the Crimsons became state runner ups for the second year in a row.

Sydney McKenna, a player for the Rockets, transferred to Assumption from Manual her junior year of high school. “I am so proud of them [Assumption]. We couldn’t have done it without everyone [the whole team].”

The Crimsons’ head coach Brittany Tolen knew this game would be full of determination. “They were incredible. I’m so proud of them” Tolen said.