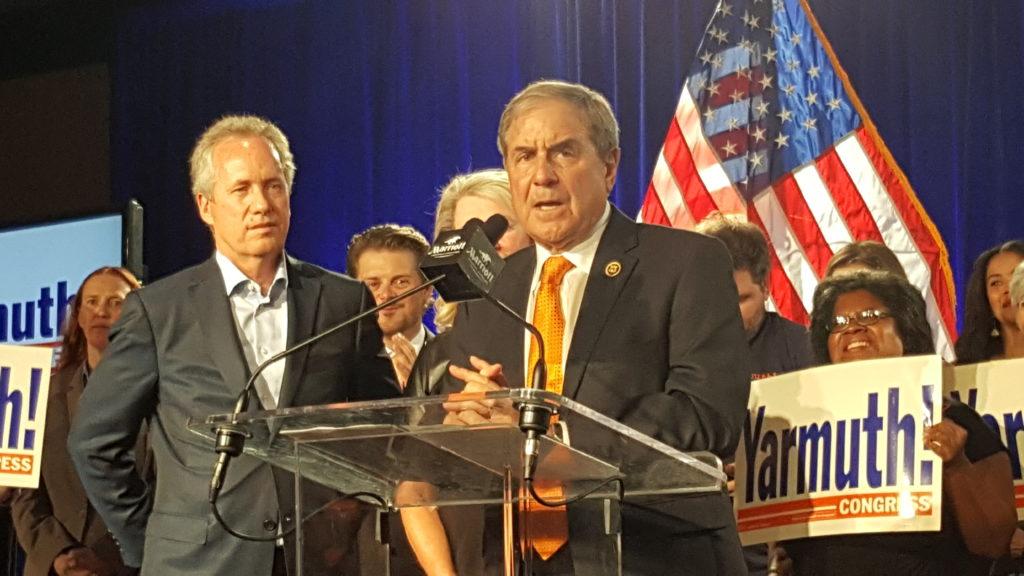 Yarmuth speaks about the election at the Marriot. Photo by Phoebe Monsour.

John Yarmuth gave his re-election speech at an election viewing party in the Marriott on Tuesday, Nov. 8.

Barbara Sexton Smith was also at the party while she was being elected for district four’s Metro Council. It was her first time running and she was unopposed.

Sierra Tamalonis (11, YPAS), went to the party with her family.

“I like to be an active member in politics because I have a lot of friends who support Donald Trump,” Tamalonis said.

A republican Manual alumnus, Eric Harshfield, went to the party to support his Democrat friend.

“As much as Kentucky loves the annoying orange, I was not going to vote for him, so I did vote for Hillary,” Harshfield said.

Yarmuth’s son, Aaron Yarmuth, introduced his father to the stage.

Aaron Yarmuth ended his speech explaining what Democrats had done for America. He talked about how Obama helped get many countries to sign the Paris climate deal.

“There was a time, even more recently, when you couldn’t marry the person you love,” Aaron Yarmuth said, “but look where we are now, and for that I only have two words: thanks Obama.”

“In the midst of the most vile, destructive campaign of my lifetime, which is now pretty long, when it would have been easy to turn away, you stayed focused,” Yarmuth said, “you did the work that needed to be done to keep the wheels of progress in motion to ensure that this nation of immigrants continue to be the land of opportunity.”

“When they signal that women, the gay community, immigrants, people of color or the disabled are somehow less than, tell them we expect more, we demand more,” Yarmuth said.

Yarmuth has the support of even some Republicans.

“I respect what Yarmuth has done. I think initially I did not vote for him,” Harshfield said. “He’s done a respectable job. I haven’t had any real problems with him, and I did support him this year. Both sides have to acknowledge that the other sides have some legitimate concerns,” he said.