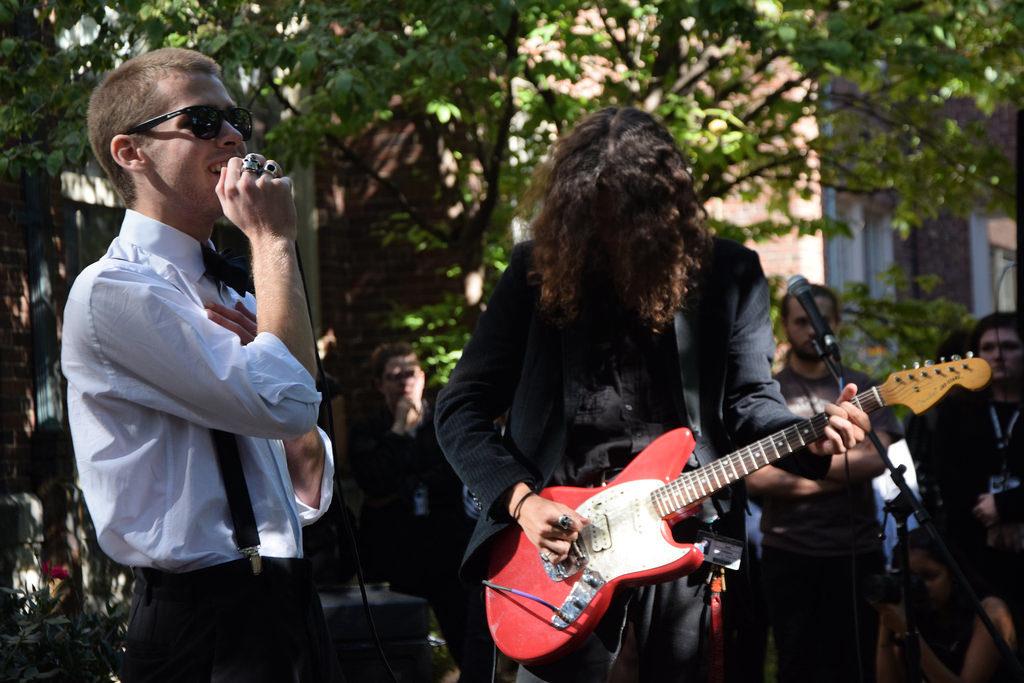 The holidays yield all sorts of traditions: baking cookies, watching winter themed movies, viewing lights through the city and listening to holiday music. In this edition of the Listology series, the Manual RedEye staff brings you their least favorite holiday songs that are typically on blast during the winter months.
The songs that make us cringe
Olivia Evans: The worst Holiday song is “Little Drummer Boy.” There are 40 lyrics in this song, yet only 17 of them are words other than, “Pa rum pum pum pum.” While this song attempts to explain the story of the three Wise Men’s travels to see the newborn baby Jesus, it terribly fails. Another problem with this song is that because of how bland it is, there are several different versions and energies with the song, and none of them run together consistently.

Olivia Dawson: The worst holiday song is “Do You Hear What I Hear?” Again, it’s repetition gone wrong and no one hears what they hear. I’m also not the biggest Christmas music fan, so it’s especially hard to tolerate a boring song like this one.

Piper Hansen: The worst holiday song is “Silent Night.” Not only has every rendition of the song been butchered, but the content of the song also does not tell a new story or experience. Even if you aren’t religious, most people know the “real” story of Christmas and its history. The song is older but should have some type of edit to create a new type of listening experience.

Adviser, Mr. James Miller: The worst holiday song is “Baby, It’s Cold Outside.” Although I am aware of the feminist defense of this song, this is 2017, not 1944, and the song is now creepy and obnoxious. Maybe the drink is spiked, maybe not; maybe she really wants to stay, maybe not. Either way, make a decision and stop singing about it. Ugh.

Reece Gunther: The worst holiday song is “Jingle Bell Rock.” The song is very repetitive and a spin-off of the classic “Jingle Bells.” The song attempts to use Jingle Bells in every line of lyrics in the song, whether it’s for describing a dance move, describing a location or just repeating it to make the song even longer.

Hunter Hartlage: I’m generally a pretty big fan of Christmas music, but my love for the genre (and the holiday in general) means that when I hear bad Christmas songs, it’s unbelievably frustrating. The absolute worst of these bad Christmas songs has to be “Santa Baby.” In the song, a woman attempts to literally seduce Santa Clause (gag) into giving her many insanely expensive things for Christmas. The song manages to be extremely uncomfortable to listen to while also embodying the incessant materialism that has infected Christmas in America for decades. These things combine to make “Santa Baby” the absolute worst Christmas song.

Cicada Hoyt: I am not a fan of Christmas music in general, whenever it is put on I automatically put my earphones in to listen to something that won’t make me want to rip my hair out. If I had to choose, Bruce Springsteen’s “Santa Claus Is Comin’ to Town.” I just don’t like Bruce Springsteen.

Jade Broderick: The worst Christmas song of ALL TIME is Taylor Swift’s cover of “Last Christmas.” Now don’t get me wrong; the original song by Wham! is a classic song, but T-Swift just ruins it with her somewhat jarring and country tones of her 2009 dark days. The pop princess needs to stick to her own genre and stay away from holiday music.

Amberlee Tate: The worst holiday song is “I Saw Mommy Kissing Santa Claus.” Although it is a classic, I have always found it to be creepy and confusing. I don’t know whether or not Santa Claus is her husband or if her son saw his mother cheating with Santa Claus. Either way I just find the song to be obnoxious.

Phoebe Monsour: The worst holiday song is “The Christmas Shoes.” It is about a little kid who wants a stranger to buy him shoes so his mother can see Jesus with her feet looking pretty because she is dying. My mom hates it too.

Annie Zhang: While I’m a fan of most Christmas songs, the one I dislike the most is “We Wish You A Merry Christmas.” I can’t stand this song because most of the song consists of the same six words — “We wish you a merry Christmas”– and I can’t listen to this song for more than a few seconds before turning it off.

Savanna Vest: Let’s just be honest: if you’ve ever been in the car with your parents one winter afternoon and the song “Santa Baby” came on, I’m sure you felt at least slight discomfort if not exceptional humiliation. (I won’t even give you a link to the song because you don’t deserve to suffer that discomfort if you have not already been subjected to it.) Aside from the overt sexualization of a children’s figure, “Santa Baby” also perpetuates the notion that women are simply creatures of materialism, especially since the era of the song’s creation was one of the post-World War II economic boom and of the domestication of the “housewife” stereotype beginning to embed its roots into U.S. society.

Greg Schwartz: Chanukah Fever is pretty bad. The beat aged poorly, and the “Chanukah” aspects are really forced. The song sounds like it’s written by somebody who has no idea what Chanukah is actually like but was told to write a song about it that matches Christmas song repetitiveness. It’s often likened to Adam Sandler’s  “The Hanukkah Song,” which is a shame because “The Hanukkah Song” was my favorite in middle school.

Bryce Grant: The two worst Christmas songs have to be “Silent Night” and “Mistletoe” by Justin Bieber. “Silent Night” is terrible for the same reason that Piper said. I don’t like how melancholy the song is when it’s not even about a topic that should produce emotion. It’s used in Humane Society advertisements, and it just makes people feel bad… That’s not what people need during the holidays. “Mistletoe” is just an atrocity. Justin Bieber shouldn’t be allowed to sing holiday songs.
Not a fan of holiday music
Nick Kopp: Don’t label me as a “Bah Humbug,” but I am not a fan of Christmas music. As mentioned by a few of fellow writers, there’s just too much repetition — both in the individual songs and in the genre as a whole. Olivia Evans and Olivia Dawson focused on “Little Drummer Boy” and “Do You Hear What I Hear,” as songs that just repeat the same lyrics over and over and over again. The same can be said of “Santa Claus is Comin’ to Town.” Even coming from Bruce Springsteen, this Christmas diddle doesn’t produce any substance, just the same line reminding us that the jolly guy with a stomach like a “bowl full of jelly” is on his way.
No holiday music is bad
Grace Bradley: In my opinion all Christmas songs are wonderful. Even the songs that are considered the “worst” (although there is clearly no such thing!) are pretty great. Every Christmas song I have ever listened to helps spread Christmas joy and spirit.

Maddie Gamertsfelder: In my “professional Christmas opinion,” I believe there is no such thing as a Christmas song that doesn’t make you want to turn up the music. Every Christmas song helps get everyone in the spirit of the holidays no matter who you are. Singing and dancing to all the different songs has to be one of the best parts of this time of year.

Katelyn Bale: I love all holiday songs. Holiday songs get you in the spirit of December. Whether it’s Hanukkah or Christmas music, every song has an uplifting feeling to it. I could party to holiday music all year long.

Featured image citation: “Ornament” by Avi on Flickr is licensed under CC BY-SA 2.0. No changes were made to the original image. Use of this photo does not indicate photographer endorsement of the article. License link: https://creativecommons.org/licenses/by-sa/2.0/.