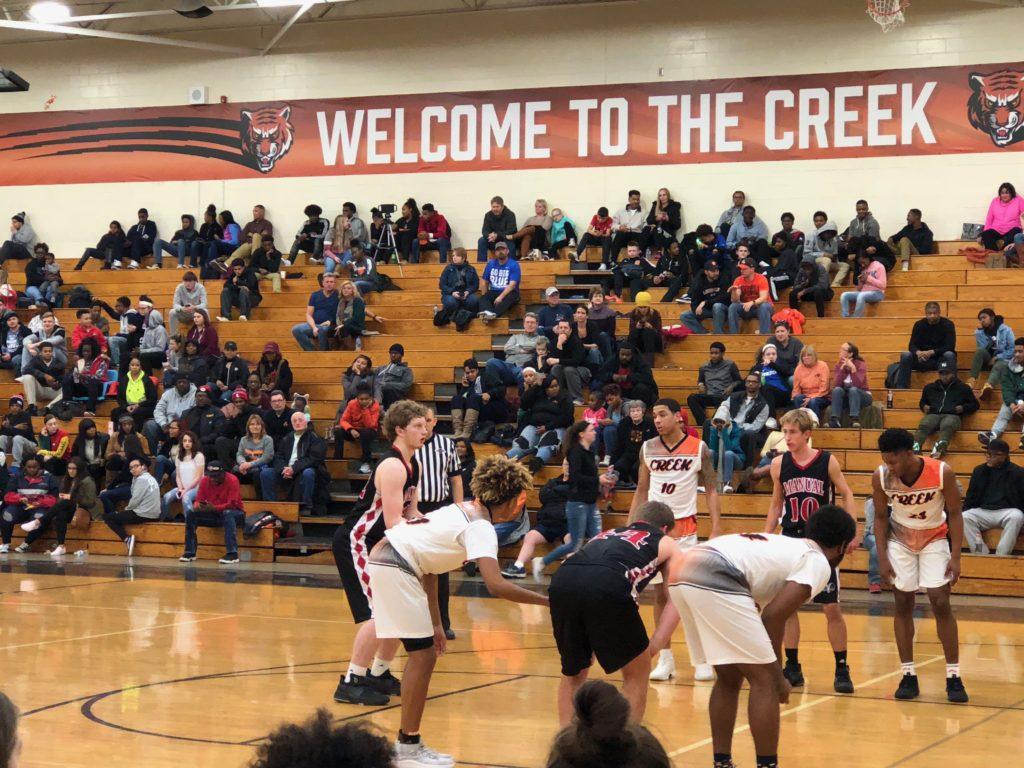 The girls’ and boys’ basketball teams both faced off against the Fern Creek Tigers on Friday evening at Fern Creek High School. The girls’ team won by a large margin, as expected. The surprise of the night came when the boy’s team faced off against the #1 ranked team in the state of Kentucky (according to the Litkenhous Ratings) and only lost by two points.
Girls’ game
The girls’ game started off different from usual as Anna Littlefield (10, #25) replaced Jaela Johnson (12, #3) in the starting lineup. Without Johnson on the court for most of the first quarter the Crimson offense seemed lethargic. Loose passes and missed shots from Manual allowed Fern Creek to hold a 15-13 lead at the end of the first quarter.

Johnson checked into the game just before the end of the first quarter, and it did not take long for her to make her presence felt. On the first possession of the second quarter she drained a three pointer to take a 16-15 lead, a lead that the Crimsons would never relinquish.

“We all need to stay on the same page and be hungry to beat anyone that is in our path,” Johnson said.

The Crimsons continued their usual offensive style of pounding the ball inside with star forward Nila Blackford (11, #41). Blackford made her presence felt on the boards, grabbing multiple offensive rebounds and giving Manual extra possessions.

The second half saw more of the same dominance from the second quarter. Manual continued to drive the lane, getting multiple layups from Aniah Griffin (12, #21) and Blackford.

Manual’s lead kept growing as the team was clicking on both offense and defense. The Crimsons won in blowout fashion by 69-48.

With the game in hand, coach Jeff Sparks kept multiple starters in the game, despite having a game against the state’s top ranked team, Sacred Heart Academy, the following night, Jan. 6.

The team has faced more adversity this year than in years past. Rather than letting an early season loss to rival Male high school get the team down, the players remain optimistic.

“The adversity is not holding us back, it just makes us better and stronger for the next challenge to present itself,” said Johnson.

The Crimsons will face a handful of challenging opponents in the Girls’ Louisville Invitational Tournament held from Jan. 23-27 at Bellarmine University and Christian Academy of Louisville.
Boys’ game
The second game of the evening featured two teams at different levels of success. Fern Creek, the state’s top ranked team, has been riding the momentum from knocking off (then #1 ranked) Trinity high school a few weeks ago. Manual’s record is hovering around .500 for the year, but if tonight’s game is any indication, that may be about to change.

The Crimsons showed promising signs of a team that is about to have a breakthrough. In the fist quarter, Manual battled back and forth with Fern Creek well enough to earn a 15-15 tie at the end of the period.

“We always have the confidence that we can hang with the best, so our game plan was to control the tempo and play our game [style],” Luke Carns (12, #23) said.

The Crimsons promptly took the lead on the first possession of the second quarter when Zack Recktenwald (10, #30) drove the lane and made a layup. Fern Creek stormed back and showed the crowd why they’re ranked #1 in the state. The Tigers held a 28-21 lead over the Crimsons at halftime.

The Tigers came out with the same intensity in the third quarter while it seemed as if the Crimsons hadn’t yet come out of the locker room. Fern Creek hid a barrage of mid range jumpers and three pointers that opened up a 49-37 lead at the end of the third quarter. With just 8 minutes left the play, the chances of a Crimson upset were bleak.

“We played pretty good defense on those guys, which allowed us to get back in the game when we got down double digits,” Carns said.

However, Manual showed resiliency and passion in the fourth quarter. Manual pounded the ball into the post and let big man Eli Roberts (10, #24) go to work. Roberts either made his layup or got fouled in the process and then sank the free throws. Kenyan Jacob’s (12, #3) quick cuts to the basket and pinpoint passes were also instrumental in Manual’s comeback.

With just 1:14 left the play in the game the Crimsons had cut the Tiger lead to 55-52. Manual went back to the hot hand as Jacob continued to get to the basket. He hit three free throws over the final three possessions that brought Manual within two with nine seconds left to play.

Jacob again got the ball on the final possession, but couldn’t connect on a long two points jumper that would’ve tied the game. Jordan McClendon (12, #21) grabbed the rebound and threw up another shot but couldn’t get that one to fall either.

“A lot of teams would go down double digits to the #1 team and just lay down, but we fought until the very end and had a chance to win,” Carns said.

Ultimately, the comeback came up just short. However, Manual showed a lot of promise for what is to come this season. The team will not be participating in the Louisville Invitational Tournament next week, so they will have a week off to practice.

The Crimsons’ next game is at Manual against Atherton High School at 6 p.m. on Jan. 16.