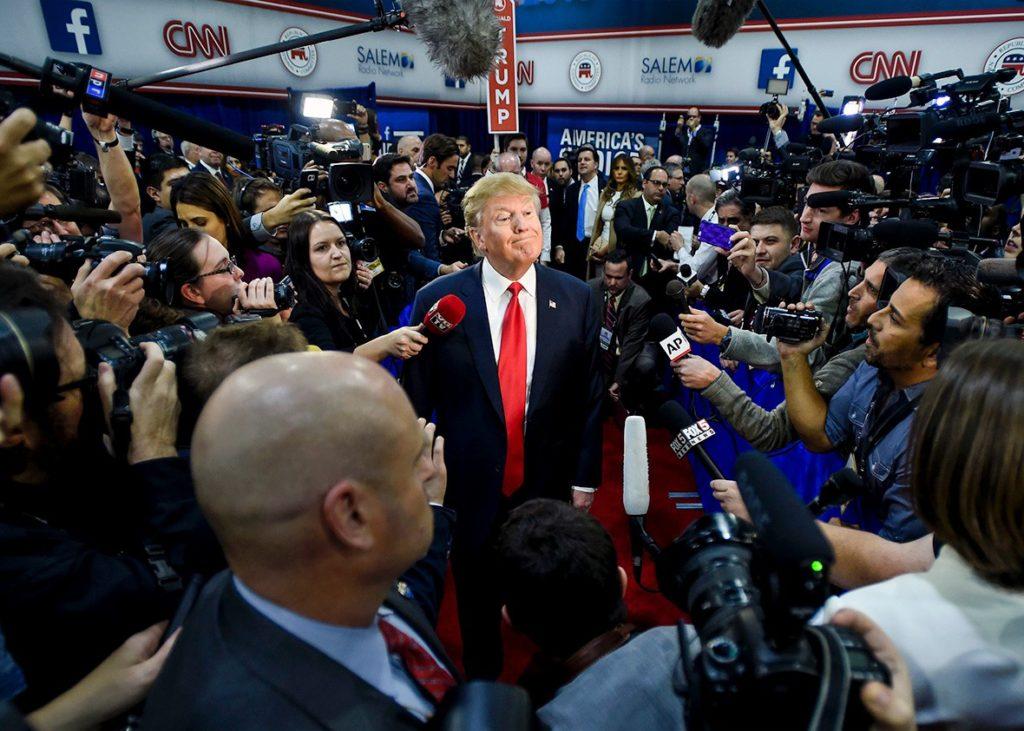 Donald Trump smirks at the "Mainstream Media" as they barrage him with questions after a press conference. Photo by Whitney Webb at Common Sense Evaluation. No changes have been made to this image. Use of this photo does not indicate photographer endorsement of the article.

Audrey Champelli (11, J&C), Copy Editor of On the Record, and Maggie Mitchell (11, J&C), Student Life Section Editor for the Crimson Yearbook, contributed to this article.

On Jan. 17, President Donald Trump released his “Highly Anticipated 2017 Fake News Awards.” The list compiled articles written by “the most corrupt and biased of the Mainstream Media” as categorized by the president. While several news organizations debunked the “unrelenting bias, unfair news coverage and even downright fake news,” the list and the GOP’s promotion of the event was a direct attack on the freedom and influence of the press.

Trump making these sorts of attacks on the press is not a new phenomenon. Since the beginning of his presidential campaign, he has emphasized his dislike toward the media, calling out journalists on Twitter and claiming that the media is “the enemy of the people.” He’s even called interview questions “fake news” when he felt threatened.

The FAKE NEWS media (failing @nytimes, @NBCNews, @ABC, @CBS, @CNN) is not my enemy, it is the enemy of the American People!

Before the awards, however, Trump still had not resorted to making a public list of his least favorite news sources and stories. Now that he has, journalists are seeking solace in satire.

Particularly on Twitter, the response to Trump’s Fake News Awards was largely light-hearted and humorous. Reporters made jokes about the outfits they’d wear, the speeches they’d give and the after-parties they’d attend when they won their very own “fakey.”

The overarching comedic tone may be due in part to Twitter’s concentration of entertainment journalists like Stephen Colbert, Samantha Bee and John Oliver. It makes perfect sense that these comics would joke at such an unprecedented circumstance — it’s their job — but humor was often the response of choice for online and print-publication reporters as well.

As student journalists looking to professionals for guidance, it’s alarming to see only laughter and jokes instead of real concern in this time of hasty oppression. Don’t get us wrong, it’s understandable. Trump’s comments and actions toward the media are so out of the ordinary that journalists everywhere can’t help but laugh, but when should laughter give way to serious action?

The Fake News Awards aren’t something journalists should be taking lightly. Trump’s continued criticism of the press as “fake news” is all part of an effort to discredit the media. And it’s working — in a way that should be deeply alarming for journalists everywhere. Trump has the public’s ear, and when he tells them a source is untrustworthy, they listen. To his supporters, if the president says the New York Times is a biased and untruthful news site, they stop listening to what the New York Times has to say. And that’s just one example.

The Los Angeles Times reported that “the president’s escalating assault on the free press is part of his broader effect to weaken our democracy for his own political and personal gain.” All parts of this unorthodox aggression towards the truth are incredibly dangerous in terms of our democracy and the growth of trust between the American people, journalists and the government. Democracy cannot thrive without some reliance on the press to be a transparent, truthful and loyal outlet.

The warning signs are already appearing, and they shouldn’t be ignored. Until professional journalists begin to find a balance between reporting the truth and reacting to the truth, there cannot be transparency.

In a political system full of complexities and nuances, the press has been an essential bridge between the people and their representatives, not only keeping politicians honest but also presenting important information in an understandable way. When the public loses trust for the press, they lose an objective source of information about how their government is operating. They’re forced to take politicians’ words as true, even when those politicians’ incentives aren’t aligned with their own.

The Washington Post puts it simply: “a country without any independent arbiters of facts and truth is a place in which the possibility of civil discourse is impossible […] if you’ve ever watched a game without any agreed-upon rules or anyone to enforce those rules, you know it’s not a game at all but rather a total mess. We are closer to that place today than you might be willing to admit. Which should be scary as hell whether you are Democrat, Republican or independent.”

It has become incredibly normal to brush off Trump’s outrageous remarks as him “just being Trump,” or to some, speaking his mind instead of taking the “unnecessarily professional” tones of the office. His level of authority turns any story he disagrees with into a he-said-she-said argument instead of a factual statement. He’s created a mentality that says, “Yeah, the media’s been reporting abysmal global warming statistics, but the president of the United States says they’re lying.”

This mentality has bred a culture where his word is paramount, even above the truth.

The implications of this are extensive: If he’s convinced the public that those who criticize him are “fake news”, how will they know when their rights are being violated by the very person in charge of protecting them?

The free press exists to keep authority in check, but America’s ultimate authority doesn’t want to hear it. He’s closed his ears and convinced his supporters to do the same.

Whistleblowers and watchdogs do have power. They hold the key to the truth, but the truth can only prevail if people are willing to listen.