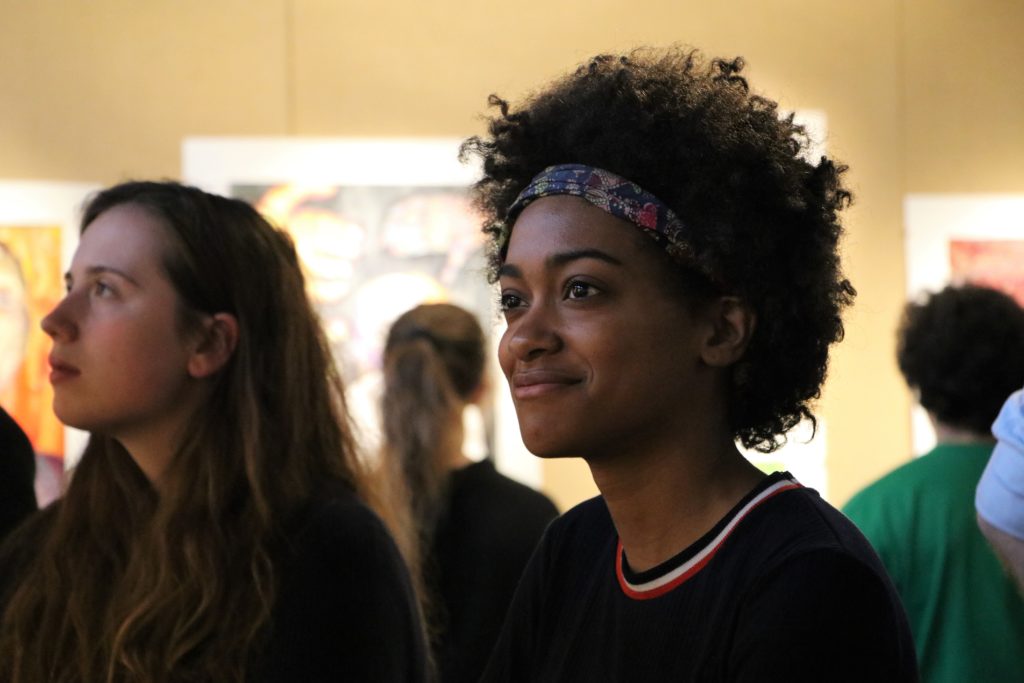 Calla Reed (12, HSU) admires the various styles of art that appear before her. Photo by Grace Bradley.

“Literally my hair is everything, the way my hair is explains the way I’m feeling,” RoDijett Jones (12, YPAS) said.

In the slave era black people were forced to groom themselves and wear their hair in a style that appealed and appeased their white superiors. When slaves were brought to America they lacked their natural herbal treatments and combs for their hair and had to rely on bacon grease and other products commonly found in the overly populus white society.

“Black hair is important to me because we’ve been conditioned to believe black hair is inferior and ugly and appreciating your hair is a major step in appreciating everything about your blackness,” Quintez Brown (12, HSU) said.

Following the conclusion of slavery, black women were still expected to wear their hair in the white fashions. In the mid-1800s Madam C.J. Walker invented the hot comb, bringing with it many revolutionary hair styles. Despite all Walker brought to the black community she was criticized by her peers for encouraging the looks of white styles.

“I see when you have a relaxer you’re bashed a lot, I’m not saying fake hair is necessary to be beautiful, but the variety it offers is what I love,” Hayley Benson (10, MST) said.

During the Great Depression, Marcus Garvey urged his supporters to embrace their natural hair associated with traditional Afro-cultural styles. Moving into the 1970s, black power started to become associated with big afros; in the early 1970s Melba Tolliver was fired from ABC for wearing an afro on air.

“I’ve always worn natural hair, even before it became more acceptable in society, because of this, I’ve grown a sense of pride in being a black woman,” Akwellé Quaye (12, HSU) said.

As the afro continues to dominate society, the Jheri Curl makes an entrance and becomes the next big thing, by the early 80s it is the dominate hairstyle. Moving into the 90s more and more trends are starting to be accepted in everyday America. White people are starting to even crossover and try out hairstyles their ancestors once deemed unprofessional or savage.

“For me, having pride in my afro is a sign of my increasing self confidence. Embracing one’s afro in the black community is a symbol of pride in one’s self and the community,” Calla Reed (12, HSU) said.

“My hair is important to me because it gives me a sense of identity. It’s not common for males my age to have hair like I do,” Nate Barber (12, HSU) said.

By 2006 the African American hair care industry was a billion dollar industry. So what does all of this mean now? African Americans now have the right, ability and resources to wear their hair as they wish, right?

No, that’s not what this means. As we enter 2018 we aren’t rid of the stereotypes or negative connotations attached to some black hair styles. This past year in Louisville there was an outcry from the community when traditional schools such as Butler and Louisville Male High School “expressly prohibited dreadlocks, cornrows and twists in hair, as well as mohawks or jewelry in hair.” Attica Scott stood on the forefront of this issue and fought for the rights of not only her student but all black students to be able to wear their hair as they please.

However, with the increasing acceptance of natural hair within the African American community people are starting to feel more empowered to wear their hair in a multitude of versatile ways.

“I love my hair, it allows for so much versatility. I can wear it long or short, picked out or curly or even in braids,” Kevon Baker (12, HSU) said.

“Regardless of big afro or soft curls, African American hair can be so different and original,” Alex Kinard (12, YPAS) said.

Just like all fights for justice the fight for equality in the realm of hair is far from over. Black people must continue to voice their freedom of expression and also continue wearing their hair as they please. African Americans must continue to recognize and fight the double standards which arise when their white counterparts culturally appropriate traditional hair styles.

Young black ladies and men must continue to love their hair and continue to illuminate the world with their #blackboyjoy and #blackgirlpower.