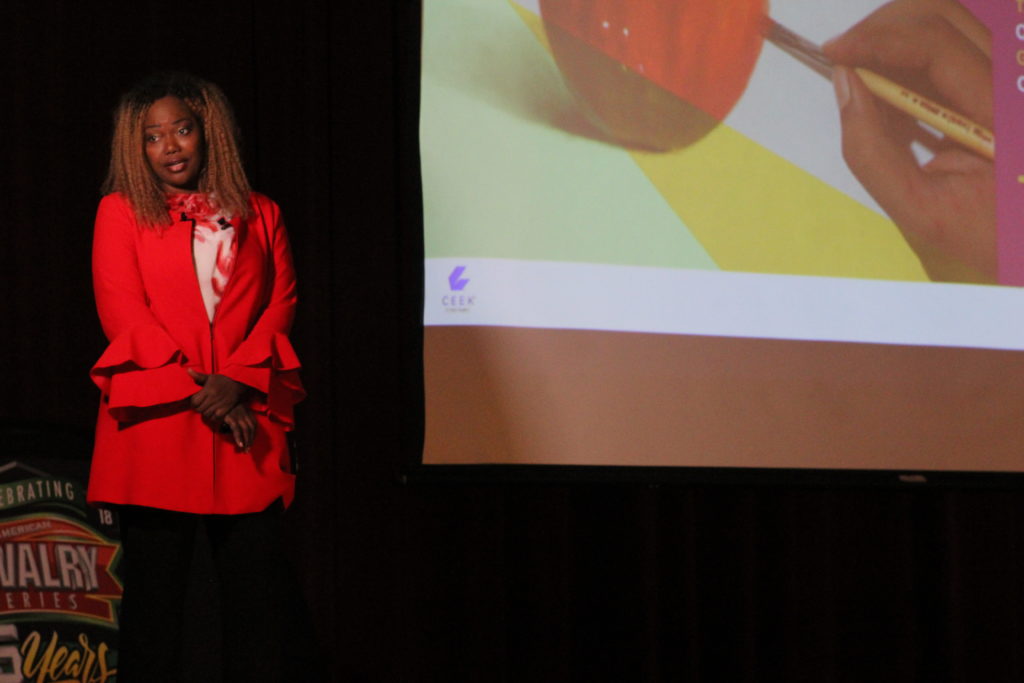 CEO of CEEK VR, Mary Spio, visited Manual on Wednesday to unveil the company’s plan to partner with the Great American Rivalry Series for the annual Male/Manual game. They plan on being one of the sponsors for the 2018 football season in order to make the game a more virtual experience.

CEEK plans to partner with only ten high school rivalry games across the country next year, including the Old Rivalry game. The Great American Rivalry Series contacted Manual in order to partner with the Male/Manual rivalry to unveil the company’s plan to use virtual reality technology to make the game more accessible to watch from home.

Spio gave a speech during fourth block and a press conference immediately following. Many students, teachers and administrators were able to listen to her speak about this upcoming plan. Mr. Kuhn chose the classes that would be there and asked all members of the Women in Science and Engineering (WISE) group to attend.

“One of their sponsors for the 2018 football season is CEEK, a virtual reality group. The CEO of the Great American Rivalry Series is a Manual graduate and the Great American Rivalry Series was based on the Male/Manual football game and they needed to have a place to present this sponsorship and announce it to the people in this community,” Manual’s Athletic Director, David Zuberer said.

Spio not only unveiled her company’s plan, she also spoke on diversity and creativity in the field of technology. She stressed the importance of using new technology in order to aid in the advancement of education.

“Because humans are virtual and visual learners, we’re going to be able to accelerate the rate in which we learn. The reason we’re going to be able to do that is that it’s going to be so much more interesting. We’re now able to have people participate in content and learning in ways that they don’t even realize that it’s happening. We’re currently working with Baptist Health and Oculus VR. We’re developing a study for VR to study how virtual reality impacts learning outcomes,” Spio said.

Spio’s hope is to use the technology of virtual reality in a way that will advance the user’s experience in situations that can now be much more easily obtained. She hopes to also use this as a creative, innovative way of thinking and learning about new things.

“Your mind will absorb what that virtual reality experience is and their hope and my hope is it will show us how to solve things that we haven’t been able to solve so far,” Rick Ford, CEO of the Great American Rivalry and BrainBox Intelligent Marketing, said.

Spio emphasized specifically using virtual reality technology to enhance the experience at all stages of the Male/Manual rivalry. From preparation to the big game, Spio wants there to be a new level of engagement with the audience and the events in real time.

“VR is a next-level engagement. It’s natural for people to be able to feel the energy; the energy is such a part of sports. What we’re looking to do with VR is give people a chance to feel that; to experience the pep rallies and to really be a part of the experience and what an innovative way to do that with VR,” Spio said.

Students were especially excited about the unveiling of this new plan. It gives anyone the accessibility to be even more involved in every aspect of the experience.

“The idea of using virtual reality for the Male/Manual game is such a cool idea. I wouldn’t think that we would be able to watch the game even afterwards in such an interactive way. I’m glad that even after I graduate I’ll be able to keep up with the game if I want to,” Lilian Tapia Fernandez (12, HSU) said.