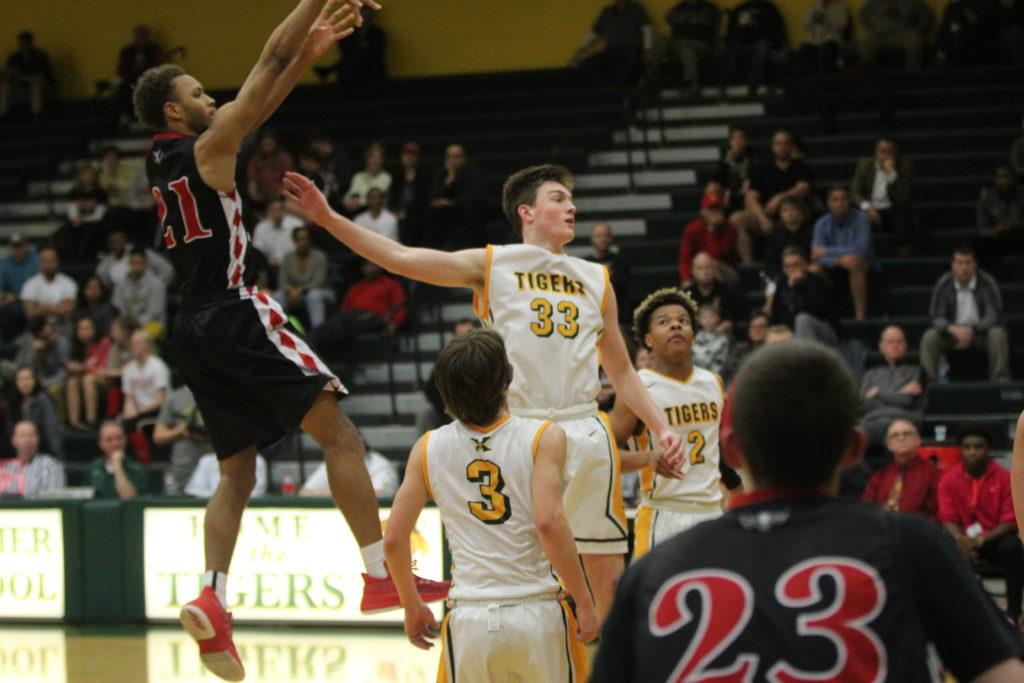 The boys’ basketball team’s season ended on Tuesday night after they lost to St. Xavier by a score of 56-49.

Both teams got off to fast starts offensively, each scoring 18 points in the first quarter. The Crimsons made three three-pointers, including two from Carns. St. X pounded the ball inside to get their points early.

In the second quarter the offenses seemed to slow down. Both the Crimsons and the Tigers traded few buckets for the entirety of the period, keeping the game close and intense.

Manual made another three pointer with 12 seconds left in the second quarter to take a 29-28 lead. St. X got the ball down the court and threw up a layup that appeared to come after the buzzer had sounded, but the referees counted the basket anyway. The Tigers took a 30-29 lead into the halftime break.

The Crimsons quickly regained the lead at the start of the third quarter courtesy of a layup from Noah Hawkins (12, #32). The two teams continued what they’d done in the first half by trading baskets for the entire third quarter. At the end of the third period St. X had a 40-38 lead.

However, at the start of the fourth quarter the Tigers began to take control. A couple of three pointers from St. X’s Sam Boarman (11, #33) helped the Tigers pull a 48-40 lead with just 4:13 left in the game.

With under a minute to play, Manual trimmed the lead to just three points courtesy of a few baskets from Jordan McClendon (12, #21). Down three with little time left, the Crimsons had to resort to fouling the Tigers.

Under pressure, St. X showcased its fantastic shooting ability at the free throw line. The Tigers made their foul shots and put the game away, 56-49.

“I knew it [my high school career] had to end sometime but I feel like we deserved the game tonight, but shots weren’t falling,” Carns said.

A couple of the seniors on the team reflected on their time playing for Manual.

“I was honored to wear ‘Manual’ across my chest for four years and I won’t ever forget my teammates, especially my four seniors,” Carns said.

“It hit me hard. There was a realization that I’d never get to put that jersey back on and play another game for Manual,” Hawkins said.

The loss marked the end of the season for the boys’ basketball team. Next season the team will be without its five starters from last night’s game; Carns, Hawkins, McClendon, Kenyan Jacob and Jonah Gelhaus will all graduate this spring.

Head coach Jimmy Just (Math) faces a daunting task of reloading the squad for next year. Forward Eli Roberts (10, #24) should play a prominent role in next season’s team. Lesther Perez-Garay (10, #4) and Zach Recktenwald (10, #30) will hope to fill the shoes of McClendon and Jacob at the guard positions.