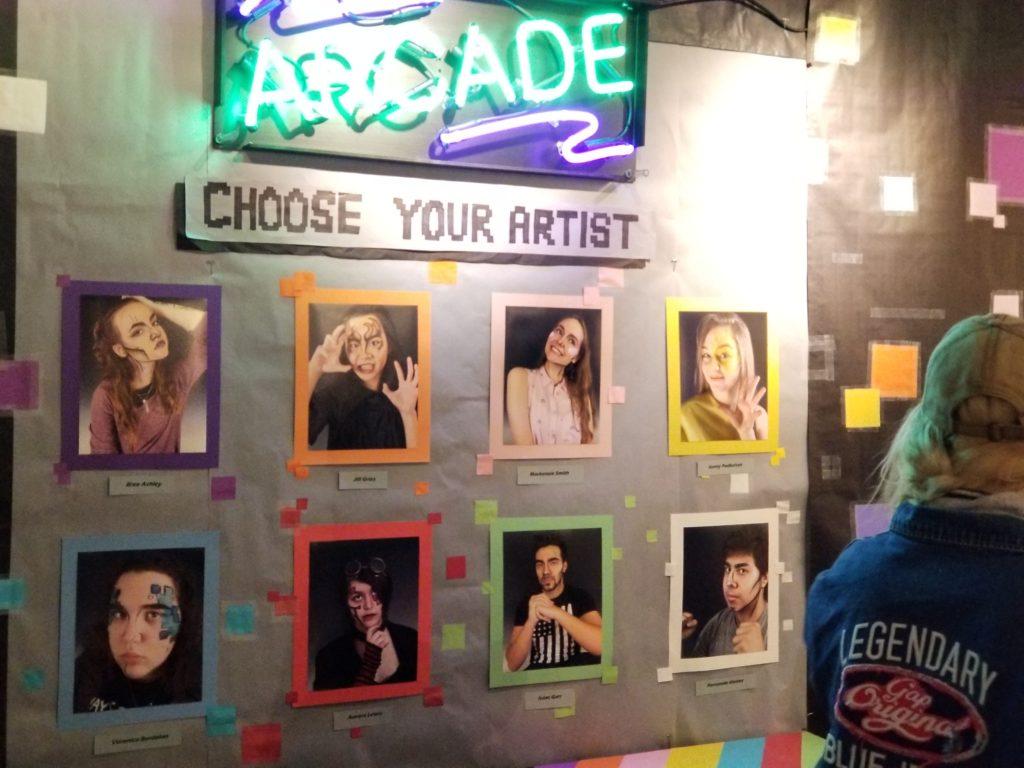 The VA magnet opened the Arcade senior art show Thursday afternoon, on the same day of the Girls’ Sweet Sixteen basketball game at Northern Kentucky University. Before the gallery had even opened, there was a line of students and teachers waiting to see the two year accumulation of artwork done by the group of VA Seniors—Breanna Ashley, Jill Gries, Mackenzie Smith, Sunny Podbelsek, Veronica Bordelon, Aurora Lewis, Isaac Garr and Fernando Gomez.

“It was so satisfying to have everyone see it,” Sunny Podbelsek said. “Not only did the actual work take a long time, but it was a lot of work to assemble the show. It’s like your last big statement as a VA student.”

There is a lot of work put into a VA senior show, especially this one. “Most of the construction came from Aurora,” Garr said. “Bree bought the [‘Arcade’] sign.”

In addition to physical construction, there’s also a theme that has to be developed. “We noticed all of our styles were very different, but also very graphic, like video games,” Podbelsek said. “ So we made the analogy that we were all like different games in an arcade.”

Art for each show is chosen from the artists’ work from the past two years. “Some of my art pieces came from a couple of different concentrations,” Garr said. “One on human insanity and the other on monotony; about a man that is constantly daydreaming about a more exciting life in the 40’s.”

The seniors in the show aren’t the only VA students who play a hand in making the show come to life. Garr had help choosing his pieces for the show. “I had Diamond Wade (12, VA), Jill Gries, Bree Ashley, and Mrs. Alford (VA) come out and pick their top ten to twelve pieces,” Garr said. “ I found the most commonly liked pieces and hung those.”

With this senior show being on the same day of the Crimson Girls’ Sweet Sixteen game at Northern Kentucky, there was worry among the VA Seniors that the turn out would not be what they expected. “Honestly I was pleasantly surprised,” Podbelsek said. “It ended up being perfect.”

Despite the big game that day, the Arcade seniors had plenty of support from their classmates. “This artist group had particularly impressive work in their gallery showing, and everyone’s voice came through clearly,” Gwen Reardon (12, HSU) said.

Isac Gaar concludes that the VA senior art show is the most anticipated moment of a VA student at Manual. “I now feel closer with my VA friends and it feels like we have created a family. Throughout my four years at school I feel like I neglected to realize the opportunities provided to me through the art program, and sadly it took me this long to realize what I have. I love these people and will miss them greatly.”

The next senior art show is set to open March 29th, giving the next group of artists only two weeks before they have to start setting up. “We have everything planned out and a timeline set, we just have to stick to it,” Diamond Wade, a VA senior included in the next art show, said.