Students stand in solidarity for #NationalWalkoutDay 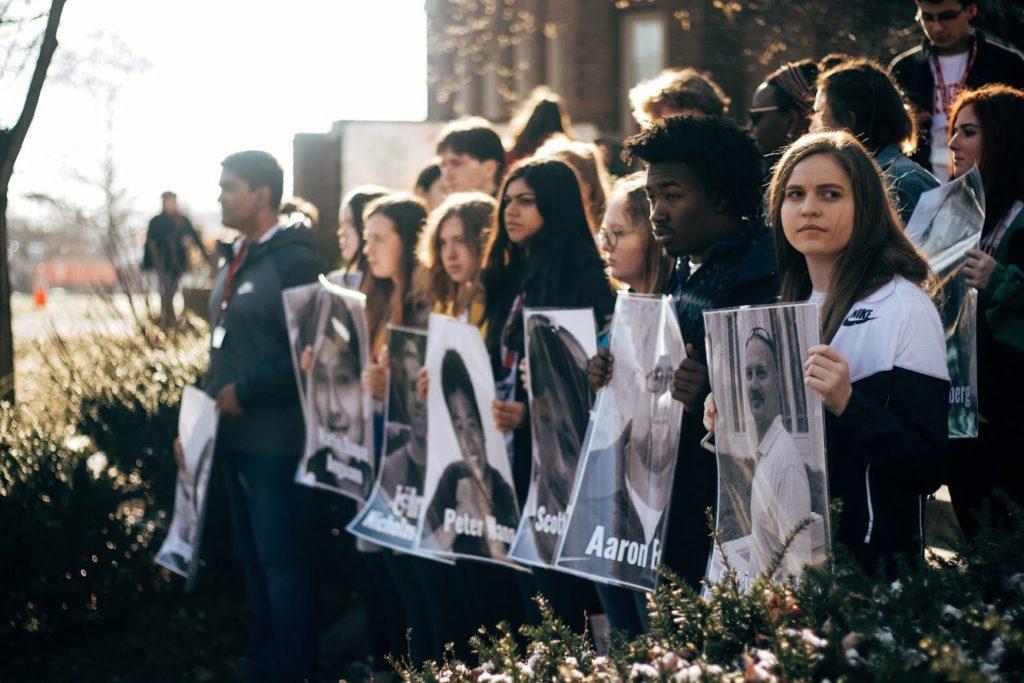 In honor of March 14, #NationalWalkoutDay, Manual participated in a student-led walkout. Over a thousand Manual students left their classrooms and gathered in center hall at 9:50 a.m. in order to walk out together in silence at 10:00 a.m.

A group of students representing a variety of magnets and clubs came together to organize this event. Alfonso Cervera (12, J&C) began the event by stating the purpose for the silence in order to honor the victims of the recent Parkland, Fl. shooting. Students dedicated 17 minutes of silence: one for each life lost. At the end of each minute, Cervera announced another name to have a moment of silence for. Organizers of the event decided to dedicate a minute of silence for each victim, as did many other schools across the nation.

“The plan for dedicating a minute to each victim was a part of the national walkout procedure,” Marshall Washington (12, HSU) said.

The walkout gave students an opportunity to both register to vote and stand in solidarity to silently honor the lives lost in school shootings.

“I felt very powerful and I am glad we are choosing to be on the right side of history. I was also able to register to vote. Change is coming! I’m actually so proud of my school for this. Everyone was quiet and respectful the entire time,” Shalyn Bryant (12, VA) said.

Although hundreds of students did decide to walk out, the walkout was an optional event for students to participate in. Teachers stayed in their classrooms with those who decided not to attend.

“I didn’t participate in the event. I wish I would have, and I normally would do these types of things. I think that this is a real problem especially in America. This needs to be taken more seriously, and the fact that people my age are standing up is really inspiring to me,” Zoe Higgins (12, HSU) said.

Multiple media outlets were waiting outside to see what the students had planned. Walkouts all went on at approximately the same time, 10:00 a.m. Students throughout JCPS were able to walk out of their classes to participate as long as they returned to their classrooms afterwards.

The 17 minutes of silence were filled with emotion for many people in attendance. Students discussed what went through their head as the time passed by.

“Throughout the 17 minutes, what was going through my head was how powerful this was. Before the event, I was kind of concerned that some people would be walking out just to skip class or fool around, but it was amazing to see that everyone cared, everyone wanted to be there and honor the victims of these school shootings. As I looked at students joining hands and bowing heads, I was moved beyond belief,” Meghan Sharma (12, HSU) said.

Many students had a concrete reason as to why they decided to walk out. Students talked of gun control, school safety and solidarity.

“I decided to participate in the walkout because I believe that myself and my classmates should always feel safe at school. The first school shooting in my lifetime that I can remember vividly was Sandy Hook. Since then, there have been a seemingly endless stream of mass shootings, so many that we as a society seemed to start accepting them as commonplace,” Sophia Goldberg (10, J&C) said.

“Every time a mass shooting happened, there would be a brief period of uproar when politicians would send out their ‘thoughts and prayers,’ but nothing would actually change,” Goldberg said. “What happened in Parkland sparked something. Students across the nation are fed up with the government’s complacency. We want more than thoughts and prayers, we want policies that will keep us safe. I made a sign to reflect that.”

Since the shooting in Parkland, the topic of gun control has become a widely discussed issue. The organizers of the event wanted to make it clear that the walkout was solely for honoring the lives lost and to raise awareness about the need to increase safety in schools.

The walkout was a nationwide expression of students from all over America. Not every walkout had the same procedures, but the widespread act of standing in solidarity was able to be seen across all forms of media; many students and teachers posted their experience during the walkout. Students were inspired to see just how many people participated not only at Manual, but across America.

“I think it was something really powerful to see. It’s the first step to showing people that we do have a voice, and even though its been ignored in the past, we won’t be ignored anymore,” Eldin Drljevic (11, HSU) said.

Although students with a wide variety of opinions about gun control attended, students were able to come together in solidarity without discussing their difference in beliefs. What seemed to resonate most among students was the necessity to hold an event like this. Students stressed the importance of speaking up and being a generation that brings change.

“It was honestly beautiful. It shows our recognition and want in a better and safer environment, and it also shows our willingness to get that. I absolutely think it’s important that we let our voices be heard. We are not only the voices, but the brains and faces of tomorrow. We have to speak up and educate ourselves on things like this because this is our future and the way we will be living,” Meredith Thomas (9, YPAS) said.