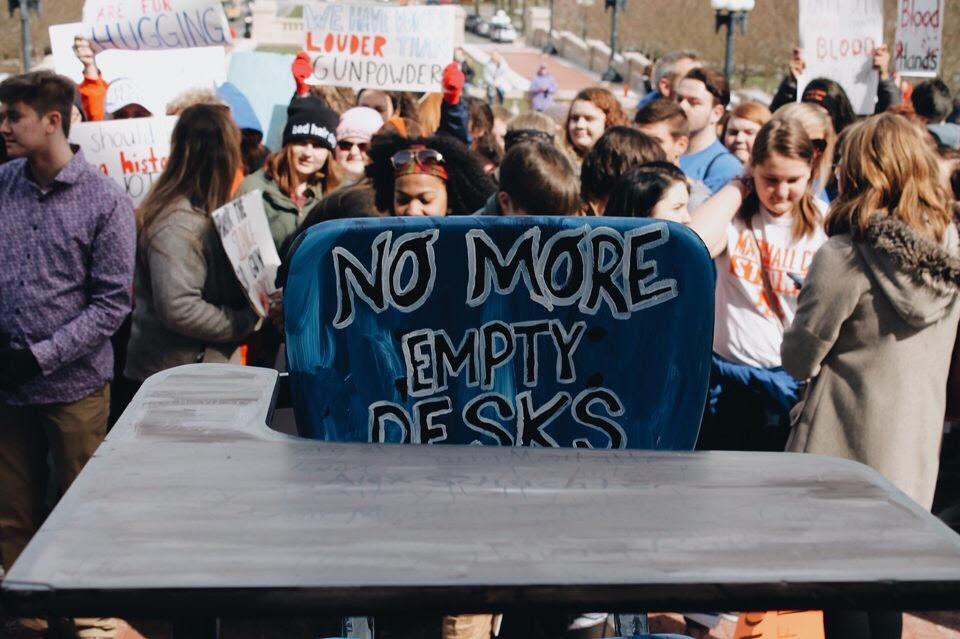 A creative sign from the Capitol. Photo by Bailey Wood.

On March 14, hundreds of students from around Kentucky gathered on the steps of the state capitol building for a rally called “Students for Student Safety,” in response to recent shootings in Marshall County, Ky. and Parkland, Fl.

Students gave speeches in support of increased gun control and student safety measures and held moments of silence for shooting victims. The assembly was one of countless others occurring on #NationalWalkoutDay, including a walkout at Manual.

“My favorite part was when students from all over the state, including Marshall County students, gave speeches explaining what happened that terrible day at their school and what they want constituents, as well as congressmen, to do,” Quincy Robinson (12, YPAS) said.

Organizers saw the most recent school shootings as a time for change in the Commonwealth.

“The day after Parkland happened, we were discussing in class what we thought about it and how we could make a difference, and I figured if I didn’t do anything, nobody would,” Lauren Darbyshire, a senior at Franklin County High School and one of the organizers of the rally, said.

“We sent invitations to legislators inviting them to speak and stand with us,” Darbyshire said.

“The protest showed congressmen of Kentucky that students demand legislative action that will improve gun control and school safety,” Robinson said. “One student said in a speech that if congressmen do not take the action we demand, we will ‘vote them out.'”

Students and supporters across the country took to social media with hashtags such as #NationalWalkoutDay, #NeverAgain and #ParklandStrong to show solidarity.

We were told by our school NOT to walk out for 17 minutes in honor of the lives lost in the recent school shootings. So instead, we decided to protest on the steps of the Kentucky capitol. pic.twitter.com/locUKspnr2

#NationalSchoolWalkout: today the students of McCracken County High School used our voices and peacefully stood up for what we believe in. When gun violence happens 30 minutes away, there is no way we can stay silent. History was made today. #MarshallStrong pic.twitter.com/mF0JowosDw