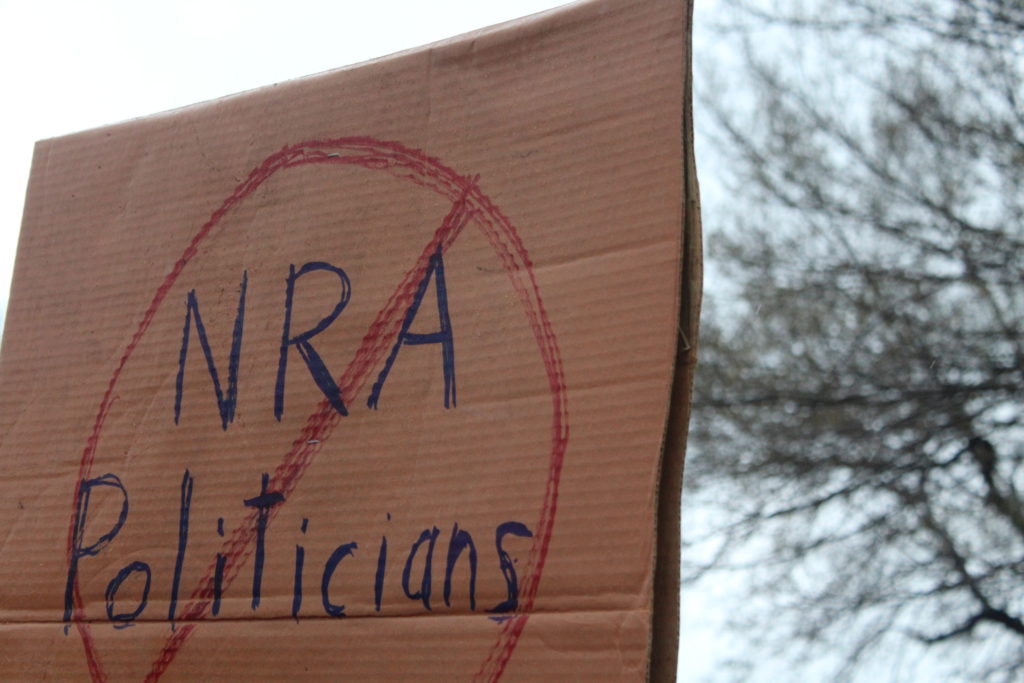 A sign in the sky. Photo by Maya Joshi.

Today in downtown Louisville, students led a protest against gun violence consisting of a march and a rally in front of Metro Hall. The local march was one of many across the nation (and even globe) as millions of students, parents and teachers speak out against school shootings, gun accessibility (for minors) and the lack of legislation addressing these issues, in part due to the political involvement of the National Rifle Association (NRA) as lobbyists.

Louisville’s march was supported by Indivisible KY, Moms Demand Action for Gun Sense, Lawyers for Good Government and is a sister march to the national March for Our Lives, “a student-led movement to end gun violence in our country.”

Louisville’s march consisted of student organizers such as Forest Clevenger, (11, YPAS), Julia Adams, an IUS student and Seneca alumni, Destine Grigsby, (11, YPAS), Ariana Moya, (11, J&C) and Sydney Meyer, a senior at Assumption High School. The student leaders held meetings at least once a week leading up to the March, and worked for hours emailing representatives on both sides of the issue to invite them to participate.

“It came together about three to four weeks ago right after the shootings in the Parkland area,” Clevenger said. “There were some adult leaders with Indivisible KY that wanted to find some students that wanted to make this happen. And we were those students.”

Speakers at the rally included a survivor of the Marshall County High School shooting, Congressman John Yarmuth and Louisville’s Mayor Greg Fischer, as well as the student leaders who organized the March. The group had support from many local politicians and organizations, such as Representative Attica Scott and American Military Partner Association Director of Family Readiness Chris Rowzee, who served as the student leaders’ adult advisor.

“The Mayor’s office has been incredibly supportive in this movement and making this happen,” Clevenger said. “Because it’s hard to permit something like this so quickly, but because the Mayor’s office is behind this, 100 percent, they are helping us out with this logistically to make anything we need happen.”

The rally made a point of being inclusive, with Sydney Finley, (11, YPAS),  singing the Black American National Anthem, “Lift Every Voice and Sing.” There was an ASL interpreter for every speech, and Grigsby and Moya held a speech in English and Spanish discussing gun violence towards minority communities.

The less-than-ideal conditions, with temperatures hovering around freezing and heavy rain, “will hurt our movement, but at the same time I think there are still going to be tons of people out there that are committed,” Clevenger said.

Clevenger was absolutely right- turnout was incredibly high for the local event, with thousands showing up from across the county and surrounding areas.

“It makes me feel really good for the future of the country, with how much work everyone is putting in,” Meyer said.

Paula Spugnardi, a teacher at Assumption High School who took part in organizing a local Teachers Rally Against Gun Violence in response to current Kentucky gun legislation, attended the March.

“This movement is spearheaded by students, and it’s an inspiration. Their voices are strong and powerful, but they can’t do it all, adults need to be inspired and show up,” Spugnardi said.

The organizers believed that the protesters have the responsibility of enacting change.

“At the end of the day, in my dreams, [the March] will accomplish stricter gun laws and type of guns civilians have access to,” Meyer said. “Young people can make a difference and have been making a difference throughout this movement.”

“Stay involved. Stay informed,” Clevenger said. “Be involved with whatever things you’re passionate about making change in in this world. Because it’s important.”

“Take that next step,” Grigsby encouraged her fellow Manual students. “You can lead a movement, and you should be the ones leading the movement. For all Manual kids, take the next step, even if it’s scary, or if you feel it’s not as important.”

The Louisville March For Our Lives is taking steps towards becoming a student-led non-profit in the future, and is lobbying in Frankfort for certain bills.

“In the end it’s just keeping this movement alive and moving forward,” Clevenger said. “There’s more to do than we can fathom, and while we hope we can sway legislators in Frankfort, because that’s where the gun legislature in Kentucky can change, we’re not certain we can. If we can’t the next step is changing who is in office. Because eventually it’s going to be our ballots that are forcing the politicians unresponsive to our cries to clean out their desk. And someday we will be the leaders replacing them in office.”