D.C. March for Our Lives calls students all over the nation to action 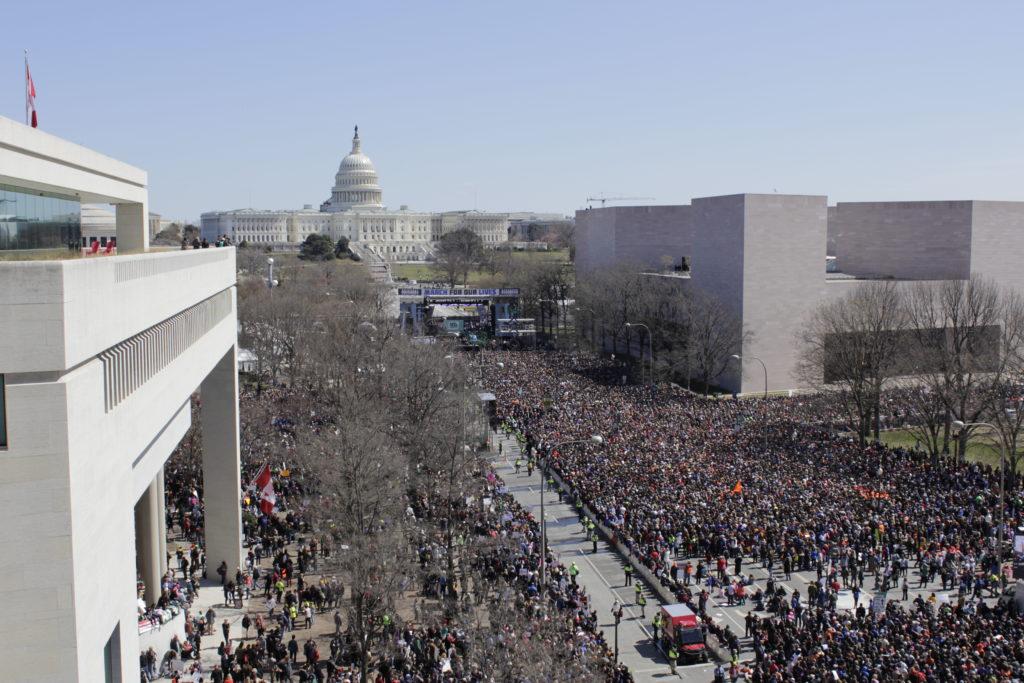 From the sixth floor terrace of the Newseum, Pennsylvania Avenue can be seen from Third to 12th Street. Photo by Nyah Mattison.

D.C. — An estimated 800,000 Americans gathered to rally against gun violence at the March for Our Lives this afternoon on March 24.

Participants agreed that what Congress is doing is not enough.

Members of the crowd chanted “enough is enough,” “vote them out” and “never again” as MSD students gave speeches regarding the gun control movement, voting and youth empowerment.

You showed up! More than 850,000 marched with us in DC yesterday. Together, we are so powerful. Together, we will #ThrowThemOut pic.twitter.com/agpcYclgtA

“The march is not the climax of the movement; it is the beginning,” Cameron Kasky, an MSD junior, said. “If you think today is good, just wait for tomorrow.”

Most had displayed marchers’ own personal frustrations with the government’s compliance with the National Rifle Association (NRA) and the current administration. Others highlighted youth perspectives and reminded politicians that youth members will be able to vote in upcoming elections including the midterms later this year and the 2020 presidential election.

“We’re going to make sure the best people get in our elections to run not as politicians, but as Americans. Because this — this — is not cutting it,” David Hogg, an MSD senior, said.

A big part of the march was uplifting youth in order to carry the fight for the modification of American gun legislation.

“People believe that the youth of this country are insignificant,” Alex Wind, an MSD junior, said. “To those people that tell us that teenagers can’t do anything, I say that we were the only people that could have made this movement possible.”

“It’s not just that we need to get more people on [young people’s] side, we also need to get the people on our side to the polls since that’s where we have the opportunity to make a difference,” Kieran Waigel (12, MST) said.

While intersectionality was not the sole focus of the march, MSD students incorporated speakers from all walks of life and from several social and activists groups around the nation. Naomi Wadler spoke on behalf of African-American girls and their relation to gun violence and there was representation from the Black Live Matter movement as well as the women’s and LGBTQ+ rights groups.

“It is so important to get people from all backgrounds with multiple perspectives,” Tanner Pruitt (12, MST) said. “The #NeverAgain movement has done this well and it has really opened my eyes as to what goes on in my community.”

With the power of social media, MSD students were able to quickly make plans for the march including organizing a stage with various performers and speakers to join them in Washington. They were accompanied by sibling marches in every state and on every continent.

“We share the stage today and forever with those who have always stared down the barrel of a gun,” Jaclyn Corin, MSD senior said. “That is why Parkland cannot and will not do this alone.”