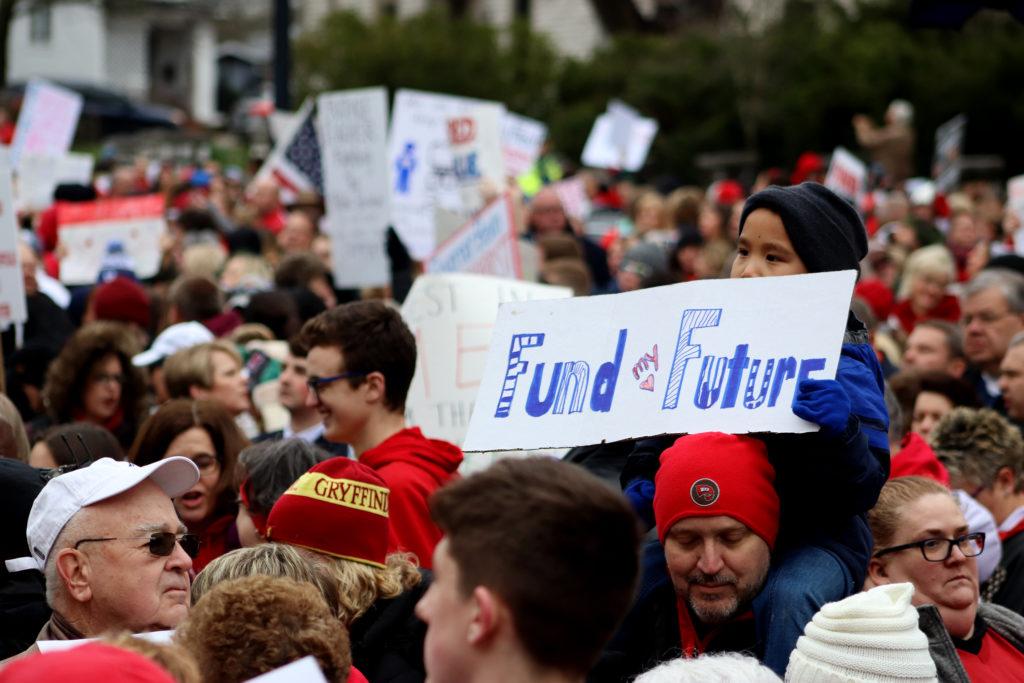 FRANKFORT, Ky. — Thousands of teachers and their supporters swarmed the Capitol in Frankfort on April 2.

Educators, parents and students rallied at the Kentucky State Capitol alongside firefighters, Teamsters, members of other unions such as Jefferson County Association of Educational Support Personnel (JCAESP) and retirees.

Ballard student Tovah Frockt and Manual student Lucy Calderon (11, J&C) were two of the hundreds of students at the rally.

“I’m here today in solidarity with my teachers because they are the foundation for my education and they’re the reason the future is what it is,” Frockt said.

The protest started with speeches from the Kentucky Education Association (KEA) president, Stephanie Winkler, the JCAESP president, Sue Foster, and others.

After speeches, protesters marched from the KEA site to the Kentucky State Capitol, where they chanted and rallied.

Later, the rally flooded inside the Capitol, where protesters cheered when their supporting legislators came out of the House and Senate chambers with almost unprecedented numbers.

This is not the first teacher protest this year and it is unlikely to be the last. Teachers have been taking action to address their pension issues for years.

On March 30, hundreds of teachers called in sick in protest of the legislation that passed the night before, which, according to the Courier Journal caused schools in more than 20 counties to close. On March 13, teachers rallied against Senate Bill One.

In 2014, teachers filed a lawsuit over their lost of pension funds.

“Our state legislature just passed a law that is partially illegal, partially immoral, and partially unconstitutional,” said Justin Elliott, alluding to the lawsuit.

Elliott attended the march because he is very close to the issue. He has kids in public school, his father is a retired teacher and three out of four of his brothers teach public school, including Jordan Elliott, a history teacher at Manual High School.

Teachers do not currently know what steps they will take. However, many on Facebook are calling for another sickout.

Protesters continue to have hope for the future.

“If there is not change by November, these representatives will be voted out,” Frockt said.