Crimsons rebel against the Rebels in girls’ lacrosse 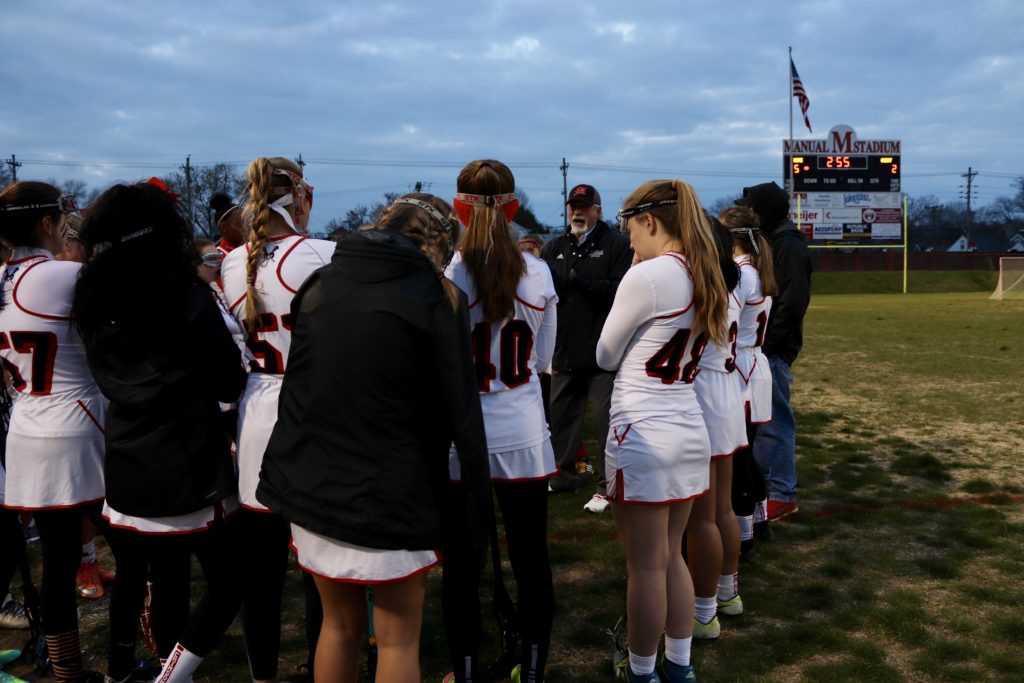 The Lady Crimsons lacrosse team defeated the Atherton Rebels 13-3 in the first official home game of the season last night.
First Half
At the start of the game the Crimsons struggled to keep possession of the ball and weren’t communicating well with each other. However, Elizabeth Arnold (#10, 11) found a way to drive the ball up to the circle to open the score for the Crimsons.

The Atherton Rebels were not going down without a fight however, they tied the score 1-1 with 19:40 left in the first half half.

“I think we made good cuts, but I think to finish them off, we could of been better at following through with the shots,” Atherton senior Sydney Handley said.

The tie ballgame wouldn’t last long as Caroline Foshee (#14, 12) slammed one in the back of the net, creating a lead that the Crimsons would carry for the rest of the game. Other goals during the first half came from Maddie Gamertsfelder (#73, 10), Ella Treinen (#74, 10) and Maddison Payne (#35, 11).

The Crimsons lead the game 5-2 at the half.
Second half
Gamertsfelder opened the half with another goal 10 seconds in for the Crimsons. The Crimsons connected passes, made quick runs and stepped up on both offense and defense in the second half.

“It was a little rough in the first half,” head coach Dean Walker said. “But we came together in the second half, really supported each other, a lot better communication, and we played a much better mental game in the second half.”

The Crimsons offensive spark continued throughout the rest of the game as there were multiple goals from Nila Blackford (#72, 11), Foshee and Gamertsfelder; all receiving hat tricks by scoring three or more goals this game.

At the end of the whistle the Crimsons found themselves victorious as they won 13-3 over the Rebels.

“So far we’ve been playing really well [this season], we have a really good squad this year,” Blackford said.

The Lady Crimsons Lacrosse team will travel to Birmingham Ala. this weekend for a tournament.