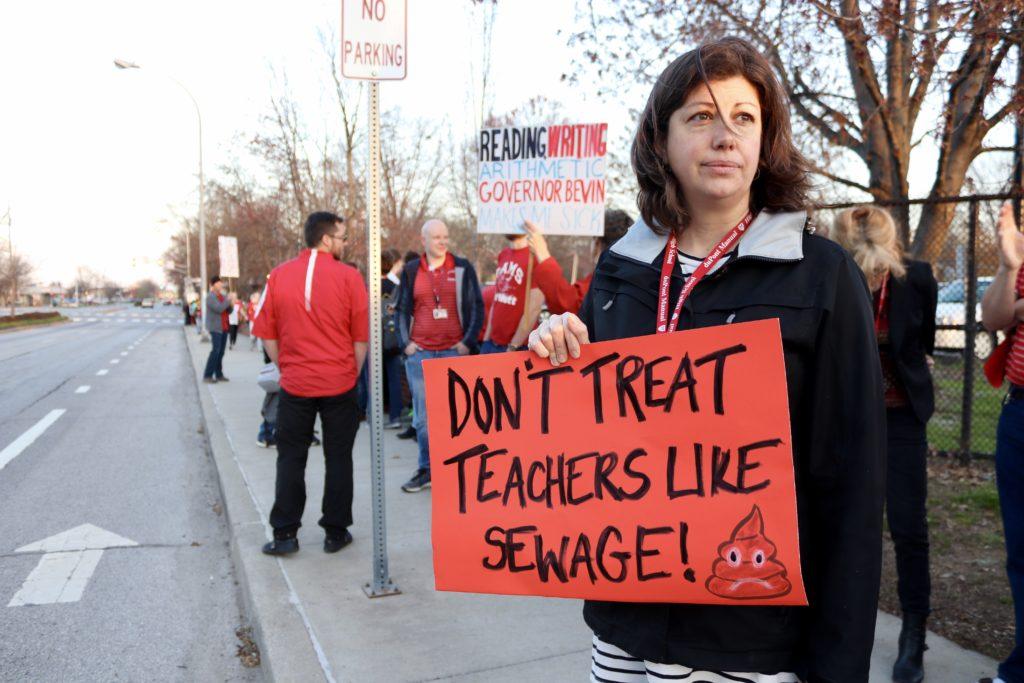 Teacher walk in, April 12 from duPont Manual on Vimeo.

Teachers and students at Manual protested Governor Bevin’s recent veto of the state budget and signing of SB151, the pension bill passed by the state legislature, by protesting outside the school, then holding a “walk-in” as school started.

The protest was just the latest in an ongoing series of actions by teachers and public workers upset with recent pension-related legislation.

The protesters began chanting and holding up signs on the corner of 2nd Street and Cardinal Boulevard at 6:45 a.m., then walked into the school in unison at 7:30 a.m.

Manual math teacher Chris Applegate, who helped organize the walk-in, is the building representative for the teachers’ union JCTA.

“We were involved in this today because the KEA and a few other groups online came up with a few actions to take for the week,” Applegate said, “We did it here because we wanted to show solidarity, and our goal today was to make our presence shown, hand out all those flyers, just to show what our problem is.”

“I think for our small community we accomplished something, but I don’t think this affects our legislature at all. We have to go to Frankfort to be seen by them,” Walsh said.

“My primary concern is that you’re creating two classes of teachers. You’re creating a class of teachers now who receive a pension, and then all new teachers who move into this hybrid plan and don’t receive the same kind of security that we have,” Holman said. “I think what you’re going to see three to four years from now in the headlines is that there’s huge teacher shortage in Kentucky.”

Walsh cited her department’s 8-year-old textbooks as an example of the state’s underfunding of public schools.

“This is about the whole school and all departments,” Walsh said. “If the legislature does not veto the bill, Bevin can do whatever he wants and he will continue to cut.”

Holman also expressed concern about the new taxes in the state budget that would effect impoverished Kentuckians.

“We know that those types of governmental decisions will have a direct impact on the students walking through the door,” Holman said. “We will have more students walking through the door hungry, more students that are homeless, food insecure or don’t have the clothes they need and we know that this will impact the quality of education that they will receive.”
Students voice their support
Many Manual students attended the walk-in to support their teachers.

Meyer Merker (12, MST) felt the need to help out since his mom is a teacher.

“I went to the walk-in to support our teachers and for the future students in our schools,” Merker said.

Meghan Sharma (12, MST) said she was worried that the state budget would cause a drop in the quality of education.

“I am 1000% in support of teachers,” Sharma said. “The fight within our commonwealth is very different than those of other states. It’s a fight to protect our futures.”

JCPS announced today that schools will be closed on Friday, so teachers from the district will travel to the Kentucky Capitol Building in Frankfort on Friday to continue protesting.