OPINION: The NRA’s money is not as powerful as it seems 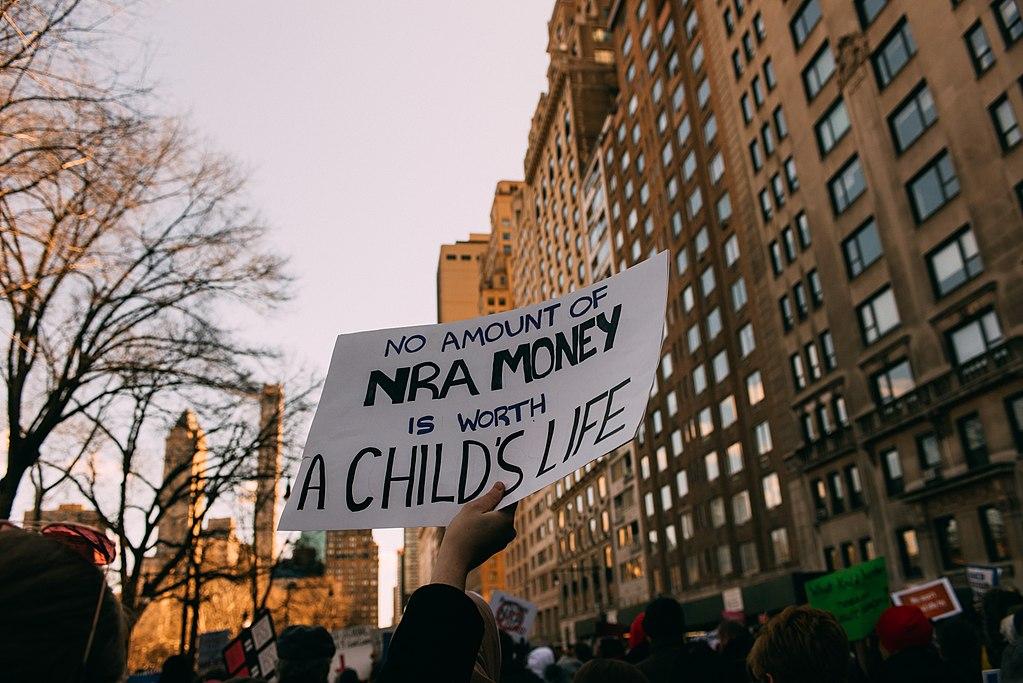 Photo of a sign at a March For Our Lives protest. Photo by Tristan Loper on Flickr, licensed under CC BY-SA 2.0. No changes were made to the original image. Use of this image does not indicate photographer endorsement of this article. Image link: https://www.flickr.com/photos/[email protected]/40993495701

Hunter Hartlage
After the mass shooting at Marjory Stoneman Douglas High School in Florida, Republican Senator Marco Rubio received harsh backlash because of the contributions he received from the National Rifle Association (NRA). While Rubio has recently taken a large amount of this animosity, the sentiment is nothing new. The Washington Post even keeps a comprehensive list of which members of Congress have received money from the NRA. For years, anti-gun advocacy groups have been calling into question the amount that politicians receive from the NRA. They claim that political advocates for Second Amendment rights, which are mostly Republicans, are afraid to support anti-gun legislative measures because the NRA donates a large amount of money to these candidates.
In response to the claims that the NRA is using money to get its way in politics, certain conservative commentators have called into question the amount of money that Planned Parenthood spends in the political sphere. The group is also very powerful, and spends even more than the NRA in some areas.
It is entirely fair to be suspicious about the money spent by organizations as powerful as the NRA or Planned Parenthood, but it is important to note that they are far from the only major organizations making political donations. There are many powerful organizations that use money in efforts to sway politicians, including labor unions, corporations, and PACs. On top of that, money is very complicated in politics. When not focused entirely on one entity, it’s easy to see that the NRA or Planned Parenthood are not nearly as influential as they may seem.

Campaign contributions
According the the nonpartisan Center for Responsive Politics, the NRA has spent $357,668 in direct contributions so far in 2018. This total represents all money donated directly to candidates and party committees by the organization, as well associated individuals and families.

The Center for Responsive Politics claims on its website that the labor sector’s political power has been decreasing recently, but the amount of money large unions spend to elect candidates is still massive. Overall in 2018, labor unions have already spent over $64 million in direct contributions. One of the most generous unions, the Carpenters and Joiners Union, has contributed $15,634,927 dollars this year alone. Another powerful union, The American Federation of Teachers, has spent $7,643,255 in contributions in 2018. Checking the numbers from 2016, The Carpenters and Joiners Union spent $27,239,959 in contributions, while the American Federation of Teachers spent an incredible $33,596,605.

Unions aren’t the end of the story, either. Corporations also donate large sums of money to political candidates. Uline Incorporated, a company that deals in packaging and shipping materials, is one of the most generous donor in American politics, having contributed $25,345,461 this year, and $23,876,172 in 2016.

Not all the money these groups contribute is spent in the same way, however. Every one of the previously mentioned organizations donated the most money to outside groups and party committees. In addition to this, the amount that these organizations donate to individual candidates also differs greatly. The candidate to whom the NRA gave the most money this year was Republican Representative Paul Ryan, who received $9,900 from them. Comparatively, the candidate that received the most donations from Planned Parenthood was the Democratic Senator Claire McCaskill, who received $18,475. The Carpenters and Joiners Union donated $11,075 to the Democratic Representative James McGovern, while Uline gave $18,900 to Republican Senator Marco Rubio.
Outside spending
While direct contributions are certainly important, they are far from the only way money can influence politics. The NRA, Planned Parenthood and similar groups also spend millions of dollars in outside spending that goes towards electing certain politicians. “Outside spending” accounts for any independent expenditures made by these organizations for political purposes. This money is usually spent in order to produce advertisements that either support one candidate or attack another.

Like with direct contributions, however, other organizations majorly outspend both the NRA and Planned Parenthood when it comes to outside spending. This year, the National Republican Congressional Committee spent $15,041,335 in such expenditures, and in 2016, their bill reached $73,601,528. Priorities USA Action, a liberal advocacy group, has only spent $562,328 in outside expenditures this year, but spent a towering $133,407,972 in 2016.

It’s also important for observers to remember that political candidates have no control over what these organizations spend their money on. The groups spending this money don’t even need a politician’s approval to run an advertisement for or against them. Therefore, even though a group may spend a large amount of money in support of a certain candidate, it’s not always fair to say that their money went to a candidate.
Lobbying
In American politics, lobbying can mean many things. On the one hand, lobbying can mean individuals or advocacy groups petitioning government officials in an attempt to convince them to vote a certain way on important issues. On the other hand, lobbying can also mean corporations and other powerful organizations paying professional lobbyists to represent their positions on important topics and try to convince politicians to vote a certain way. It’s a very important and prevalent activity in the political world, and certain groups spend millions on it every year.

Once again, however, both Planned Parenthood and the NRA are vastly outspent by more powerful organizations. The group that spent the most money on lobbying in 2017 was actually the United States Chamber of Commerce, which spent an unbelievable $82,190,000. In 2016, the Chamber of Commerce spent even more, with a towering total of $103,950,000 spent on lobbying. Other major spenders for lobbying in 2017 include the National Association of Realtors ($54,530,861), the Pharmaceutical Research & Manufacturers of America ($25,857,500), and the Blue Cross/Blue Shield ($24,330,306).

Just as before, these numbers should also be considered with other factors. Money spent on lobbying goes towards paying lobbyists, which are an organization’s representatives to politicians or political bodies. Money spent for lobbying purposes does not go to politicians, and lobbyists who try to persuade politicians with money are breaking the law, and if caught, will (or at least, should) face federal charges.

At the end of the day, a lot of organizations spend a lot of money to fund politicians and policies. While the NRA and Planned Parenthood are both notable entities in that regard, they absolutely pale in comparison to the more potent organizations funding candidates. On top of that, the ways in which an organization spends its money can also vary greatly. So while we should certainly not ignore the influence of Planned Parenthood and the NRA in politics, it’s very unlikely that either of them have a death-grip over a politician’s vote.

Featured Image Citation: Photo of a sign at a March For Our Lives protest. Photo by Tristan Loper on Flickr, licensed under CC BY-SA 2.0. No changes were made to the original image. Use of this image does not indicate photographer endorsement of this article. Image link: https://www.flickr.com/photos/[email protected]/40993495701