Crimsons tame the Tigers in the first home game 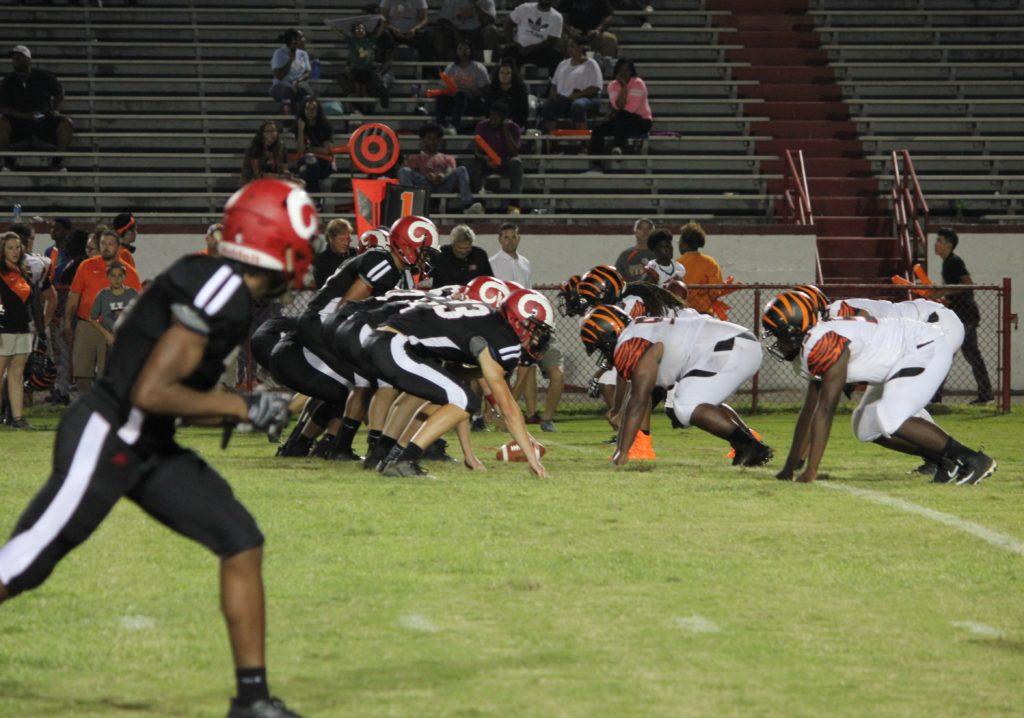 Students are tired because football keeps them up

The Manual Crimsons defeated the Fern Creek High School Tigers with a final score of 33-13 last night in the first home game of the season.

Manual has won the first home game of the season, beating Fern Creek with a final score of 33-13 pic.twitter.com/9MQVrl6jhB

First Quarter
The Crimsons started off strong by taking possession of the ball after blocking Fern Creek’s attempt of a kick, which allowed Aidan Robbins (12, #7) to score a touchdown within the first eight minutes.

The Crimsons and the Tigers battled for the rest of the first quarter, the ball changing possession multiple times before wrapping up with a score of 6-0, Manual.
Second Quarter
The Crimsons continued to push forward offensively during the second quarter. Robbins scored another touchdown seven minutes in.

The Tigers attempted to attack but were unsuccessful against the Crimson defense.

With only two minutes left in the quarter, a long pass led to another touchdown by Robbins. The Crimsons scored the extra point.

Only one minute later, the Crimsons intercepted the ball on Fern Creek’s 25-yard line. The Rams’ quarterback, Darien Wilson (9, #31) rushed the ball to score the crimson’s third touchdown.

Third Quarter
During the third quarter, the Crimsons and the Tigers fought for possession.

Less than 10 minutes into the quarter, the Crimsons received a punt on Fern Creek’s 10-yard line after the Fern Creek kicker fell down on the snap.

The Rams capitalized on the opportunity, Robbins scoring another touchdown with a one yard rush. The Crimson kicker, Patrick Holdener (10, #91), scored the field goal giving the Rams a 33 point lead over the Tigers.

The Tigers continued trying to advance the ball, getting to the Crimsons’ 28-yard line with a long pass from Fern Creek’s Isaiah Hester (#17) before turning the ball over.
Fourth Quarter
Going into the last quarter Manual was ahead by 33 points. While Fern Creek attempted a comeback, Manual’s defense was too strong.

Fern Creek attempted for two downs to throw a touchdown from their spot on the 37-yard line and failed on both, but they made it up by scoring a touchdown with 10 minutes left in the game.

With the hopes of catching up, Fern Creek was able to score another touchdown with less than a minute left on the clock, this time not scoring the extra point due to Manual’s defense.

With 10 seconds left, Manual let the clock run out and the game was over with a final score of 33-13.

Manual fans, parents, faculty, alumni and the team were excited about winning the first home game of the season.

“I just wanted to come out for my school and all the fans,” Robbins said. “It means a lot to give the school a win. It was something that we didn’t get to do a lot at home last year.”

The win also gives everyone hope and confidence for the future of a successful season for the Crimsons.

“[This win] gives us a lot of confidence for the upcoming weeks,” Manual’s head coach, Scott Carmony said. “We’re really going to take time and focus on us and worry about us instead of having a gameplay for it.”

Fern Creek’s head coach, Josh Abell was not happy with his team’s performance but was hopeful for the rest of the season.

“We have a lot of new guys in new positions learning new stuff and we’re just gonna watch the film and get better and move on,” Abell said. “The best part about this game is it’s only week two so we have a lot of season left.”

Manual’s next game will be on Sept. 7 against Western at Western Stadium at 7:30 p.m.