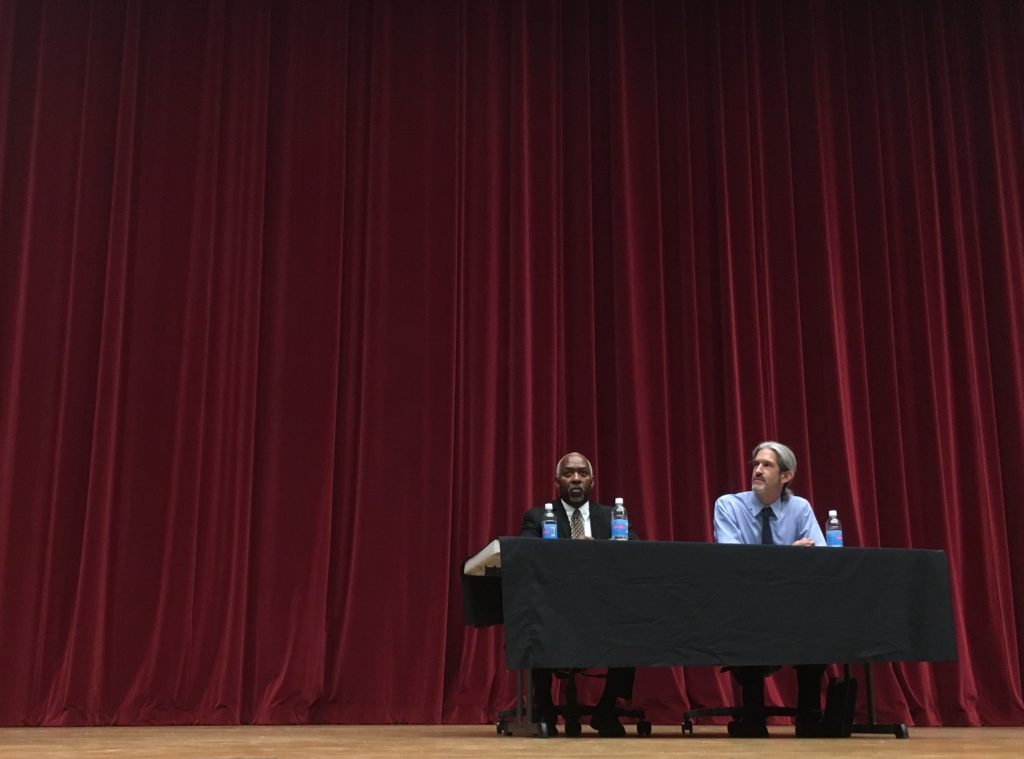 Dr. Keith Look and Mr. Darryl Farmer, the final two candidates for the principal job at duPont Manual High School, spoke to students, parents and faculty in the YPAS auditorium during a forum organized by the School-Based Decision Making (SBDM) Principal Selection Committee.

During the forum, hosted by Manual’s Executive Council, the candidates answered online questions submitted by students, teachers and parents.

The eleven questions covered a variety of topics, including student voice, highlighting less popular athletics, and diversity. Both candidates had limited time to answer each question.

Mr. Farmer
Farmer was an assistant principal at Manual from 2010 until 2016 when he resigned to take a principal job at Ramsey Middle School.

“I don’t necessarily deserve this position but I understand [Manual students…and] I would love the opportunity to come back […] and serve,” Farmer said.

Farmer said that inclusion across the board of all communities, clubs and sports teams is important to him to ensure the success of all Manual students.

“It will come naturally to me to make sure that all groups and clubs are included [in the Manual community,]” Farmer said.

In terms of making specific changes to Manual and its administration, Farmer believes that “there are not a lot of things about Manual that [he] would change.”

However, Farmer did express that he looks forward to the possibility of being able to make the relationship between administration and students stronger.
Dr. Look
After working in Pennsylvania as a high school principal, Dr. Look came back to his home state of Kentucky to aid in the educational processes at the Governor’s Scholars Program (GSP).

In 2003, Look became the principal of Meyzeek Middle School. Five years later he was reassigned to the principal position at Shawnee High School. After roughly five years in the position, Look resigned to become the Superintendent of Danville Schools. On June 30 his contract expired.

Unlike Mr. Farmer, Dr. Look doesn’t have any previous experience working at Manual or with its students, but he said he understands diversity and need for inclusion.

“With the number of student groups [here at Manual,] I want to be able to participate in the things that [Manual students] are doing,” Look said. “We should be able to welcome each other’s ideas in a respectful manner as we collaborate.”

Both candidates touched on the issue of security and safety on campus.

“Manual is a difficult campus to secure,” Look said. “Let’s look at the [safety] requirements from the state, and then decide that no matter what the state requires, we’re going to do the right thing.”

When offered a chance to discuss what he would like to change about Manual, Dr. Look said that “students have the power to control the image of events that happen at Manual,” therefore if he is offered the position he would like to unify Manual’s social media presence.

“I want to get my hands around all the voices at Manual to make sure that we have a united front,” Look said.

Neither candidate agreed to answer questions from Crimson Student Press Network reporters.
Students, faculty and parents
Students attending the forum agreed that sharing their concerns and asking questions of the candidates was a necessary part of the principal hiring process.

“I wanted to be a part of a unified student front that shows that we do care who are leader is, who our principal is and what’s going on behind office doors,” Chloe Hall (12, HSU) said.

The approximately 400 students in attendance politely applauded answers given by both candidates.

YPAS Assistant Principal Mr. Crady said he believed most students and faculty would agree that “both candidates are very qualified and our school would be happy with either one.”

Some students preferred Mr. Farmer because he had experience working with Manual students and some members of the Manual faculty.

“Mr. Farmer did great things when he was here at Manual and I think he would continue to do so if he was brought back on board,” Hall said.

But other students liked the idea of having a new perspective in the building.

“I think that we’ll get more change if Dr. Look fills the position. I think that we need to take the opportunity to change whenever it presents itself and I think that he is more than ready for that,” Forest Clevenger (12, HSU) said.

Emily Slaven (11, HSU) said that the primary factor in the decision should not be Manual’s present, but its future.

“I think that students should look to who is going to contribute to the future of Manual for the underclassmen. I think we should look for someone who is really going to bring a new environment for our students,” Emily Slaven (11, HSU) said.