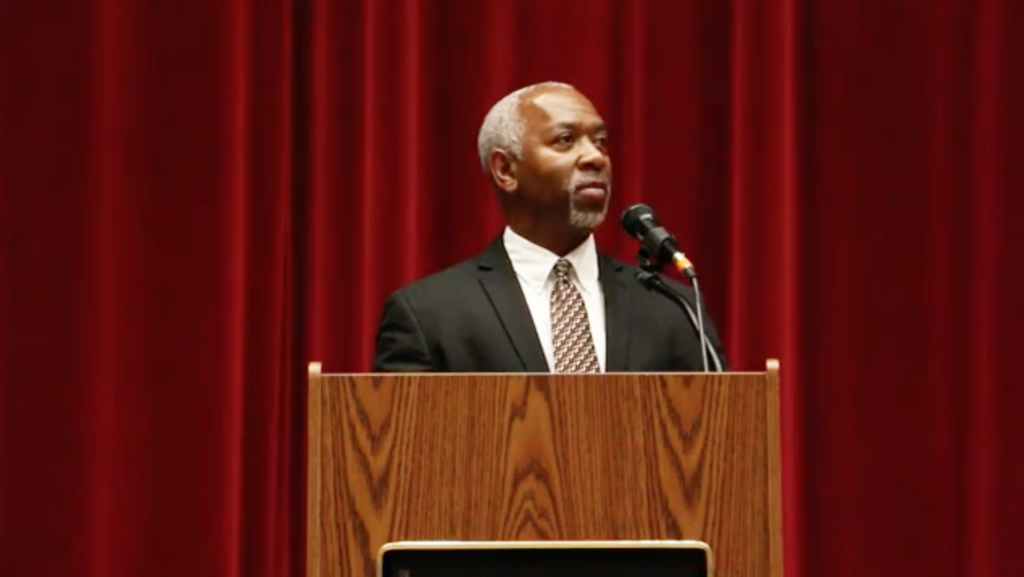 Mr. Farmer at the principal selection forum in 2018, fielding questions from students, staff and the PTSA.

Assistant Superintendent Dr. Glenn Baete sent out an email to all Manual staff informing them of the news and providing some of the details.

According to the email, the district offered Mr. Farmer the principal position and he promptly accepted the offer, planning to start on Monday, September 10. Kirk Lattimore will continue to fill in as acting principal until then.

“The principal selection process provided the committee with two finalists who had a great deal to offer to the school,” Baete said.

The email from Dr. Baete cited Farmer’s previous experience at Manual, his previous service with JCPS, and his understanding of current JCPS initiatives as reasons for the committee’s selection.

Deliberation from the principal selection committee began following the general SBDM meeting at 4 p.m. and continued until 6:15 p.m. when they made the announcement.

Baete led the committee in the meeting and asked for a motion to recommend Mr. Farmer.

Teacher Eric Purvis (Math) made the motion and the vote following was unanimous.

“Both committees valued the feedback provided during the process by students, parents, staff and community members. In the end, Farmer was recommended to the SBDM Council by the Principal Recommendation Committee and the council unanimously accepted the recommendation,” Baete said.

Mr. Farmer was assistant principal at Manual for seven years before leaving for Ramsey Middle School, where he has served as principal since 2016. He served as the testing coordinator while at Manual.

“We look forward to the next great chapter in duPont Manual’s history under Mr. Farmer’s leadership,” Baete said.