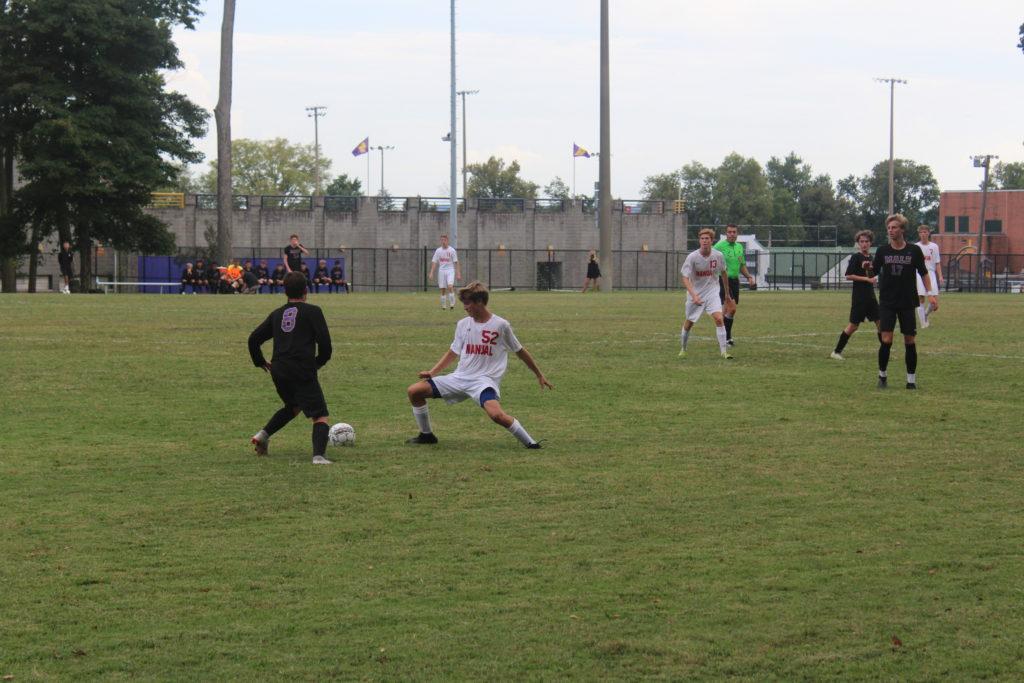 Football
After a win of 31-0 over Western, the Crimsons will face Ballard on Friday. Kick-off will be at 7 p.m. at Ballard. Check @TheCSPNSports on Twitter for live coverage of the game.

Field Hockey
After a loss to Sacred Heart Academy last Wednesday, the field hockey team will bounce back to face Assumption on Tuesday. The game will begin at 7:15 p.m. at Rachel Baker Field. This will be a Crimson/Ram Card Event. The team will then play against Butler on Thursday, beginning at 4:30 p.m. at Butler. The last game of the week is against Ursuline at Sacred Heart Academy on Saturday and will start at 2:15 p.m. Boys’ Soccer
Following a loss of 0-3 to Male last Wednesday, the boys’ soccer team is set to play Butler on Monday. Kick-off will take place at 5 p.m. at Butler. They will then play Collegiate on Tuesday at 7 p.m. at duPont Manual Memorial Stadium. This will be a Crimson/Ram Card event. They then move onto Central at 7 p.m. on Wednesday at Central. Their last game of the week will be on Saturday against Kentucky Country Day. Kick-off will be at 10:30 a.m. at duPont Manual Memorial Stadium. This will be a Crimson/Ram Card event. Girls’ Soccer
After facing their first loss of the season to Dixie Heights last Saturday, the girls’ soccer team will compete in the Lexington Catholic Invitational on Monday, Wednesday and Saturday. Times are TBA. Check @ManualAthletics and @Manual_girlssoc on Twitter for updates.
Boys’ Golf
This week the boys’ golf team will face Bullitt East on Monday. The match will begin at 3:30 p.m. at Heritage Hills Golf Course. They will the play DeSales on Wednesday at 3 p.m. at Iroqouis Golf Course. On Thursday they will go against Collins at 3:30 p.m. at Shelbyville Golf Course. They then will compete in the Grant County Invitational on Saturday at 7:30 a.m. at Eagle Creek Golf Course. Check @ManualAthletics on Twitter for updates.

Girls’ Golf
This week the girls’ golf team will compete in the Jefferson County Invitational on Monday. The match will begin at 3 p.m. at Shawnee Golf Course. They will then move on to face Kentucky Country Day on Thursday. The match will begin at 3:45 p.m. at Long Run. They will also compete in the Sacred Heart Invitational at 1:30 p.m. at Hurstbourne golf course. Check @ManualGirlsGolf on Twitter for updates.

After defeating Presentation last Wednesday, the volleyball team will face Portland Christian on Tuesday. The match will begin at 6 p.m. at Butch Charmoli Gymnasium. They then go up against Central on Thursday at 7 p.m. at Butch Charmoli Gymnasium. These are both Crimson/Ram Card events. On Saturday they will compete in the Frosh Louisville Invitational Volleyball Tournament at the Ohio Valley Volleyball Center. Times are TBA. Check @ManualVolley on Twitter for updates.