OPINION: Standardized test scores say nothing about who I am 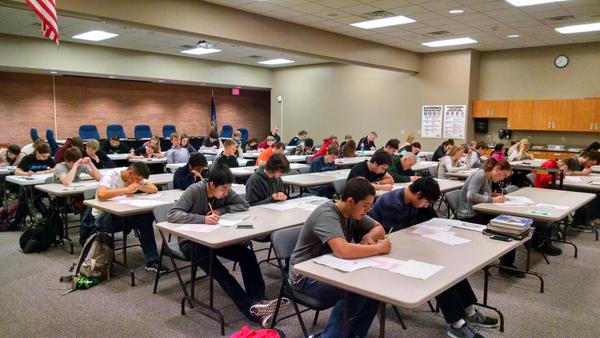 Photo by Shelby Aaberg. Featured Image Citation: Scottsbluf High School taking a test. Photo by Shelby Aaberg on Flickr, licensed under CC BY-SA 2.0. No changes were made to the original image. Use of this image does not indicate photographer endorsement of this article. Image link: https://www.flickr.com/photos/maaorg/16469657399

I remember sitting at my desk in Mr. Jackson’s room. I had just finished the preACT and I looked at my booklet with confusion and anger, not because there was anything particularly offending about it, but because it was hitting me that this is the test that students take in their junior year as a deciding factor for college. A test that covers high school math, grammar, punctuation and science. A test that shows nothing about me as a student and what I’m fully capable of. When I’m applying to colleges, they will look at a number out of 36 or 2400 to determine if I’m worthy of joining their community.

If I’m applying to college to go into journalism, why should I have to show I understand geometric concepts and how to decipher scientific charts? There are people who want to work in those particular fields that find it interesting, but for every person who wants to go into a career related to those topics, there are another handful who neither enjoy nor understand them. One student may get a near perfect score because of their deeper understanding of multiple concepts, but for another student who fails to grasp harder concepts, it could be the deciding factor of if they go to college or not.
The Money
The ACT and SAT’s goal is to measure college readiness and predict future academic success. Essentially, you pay to take a test one day out of the year, or more if you wish to improve your score. Whatever you get on the overall test will play a factor in determining where you go to college, how much you’ll be paying, or if you’ll be going at all. In addition to paying to take this test, many families and students will spend hundreds of dollars on lessons and booklets to prepare their child for the test.

The Princeton Review has an online SAT/ACT self-paced course in which enrollment costs $299, a program called SAT Ultimate which normally costs $899 but occasionally may go on sale for $599, and if you feel the need for one on one sessions, Princeton has you covered with their private tutoring which starts at $167 per hour.

“I feel like it creates a gap between people of different socioeconomic statuses. People who have less money can’t really access the resources needed to do well on tests like the SAT and ACT,” Sidarth Sundar (12, MST) said. “And our current college system puts such a great emphasis on it that you basically have to do well if you want to go to the college of your choice. It creates more opportunities for people who can access the resources while inhibiting people who can’t.”

Many families can’t afford to spend this much money on ACT/SAT courses, but unfortunately, if you can’t afford them, your chances begin to slim for scholarships and thus put yourself lower on the scale of what acceptance boards are looking for. In an article from the Huffington Post, Kat Cohen explains how it’s crucial to stay relevant and present yourself as a competitive student. In the end though, it favors students that come from families with the ability to pay for these expensive courses, books, and tutoring; students who would have an easier time paying off college debt versus a student who comes from less money and would be stuck in debt for much longer.
Contents
The preparatory classes aren’t even content related, rather they cover how to take the test properly. The videos and courses cover how to take the tests faster, how to guess, etc.

“If the SAT and ACT were really tests about judging knowledge, then having lessons from school should be sufficient preparation,” Sid said. “But they’re not really general knowledge tests.” Even Princeton Review wanted everyone to “remember: the ACT and SAT are endurance tests.”

Another problem lies within the test itself. It tests how fast a student can comprehend and analyze reading texts and charts as well as solve mathematical problems. Speed is a key element on the test, but unlike state testing where you have all the time you need and more, you have a severely condensed time to answer 40-75 questions. Many students can answer these questions if given a longer time to work them out and score perfectly, but they don’t have time in their favor. This adds more stress to students who are already under severe amounts of anxiety and thus causes under-performance.
What it actually says
These tests say nothing about who I am as a student. By taking one or both of the tests, I’m showing that I can afford to take them. If my score is high enough, then it probably means I can afford tutoring and/or extra courses that cost hundreds upon hundreds of dollars. The tests show I can answer questions quickly, but show nothing about how I work, what I like, what content I can produce, or just about anything else that could accurately portray how I am likely to do in college over the course of the years I am there.

The future doesn’t look so dark though, as there are many high ranking schools that don’t require the SAT or ACT for applications. It not only benefits students who may not be as good at test taking, but it also benefits the school due to application rates going up, thus bringing in more money and allowing the school to be more selective. Unfortunately, for many scholarships ACT or SAT scores are required, and while you may be able to get into Cornell, you’re looking at going for over $70,000 each year.

While you can decide on not taking the ACT or SAT, many students will continue to pay the hundreds of dollars in preparation and retakes because they can’t afford passing up scholarship opportunities and going to their dream college. As for me, I know I’ll be reading and doing the practice tests in the two inch thick books, hoping to get a score that satisfies my parents and myself, come junior year. It will remain unfair and biased, but in the end, it all comes down to the most important factor to the college board: money.

Featured Image Citation: Scottsbluf High School taking a test. Photo by Shelby Aaberg on Flickr, licensed under CC BY-SA 2.0. No changes were made to the original image. Use of this image does not indicate photographer endorsement of this article. Image link: https://www.flickr.com/photos/maaorg/16469657399