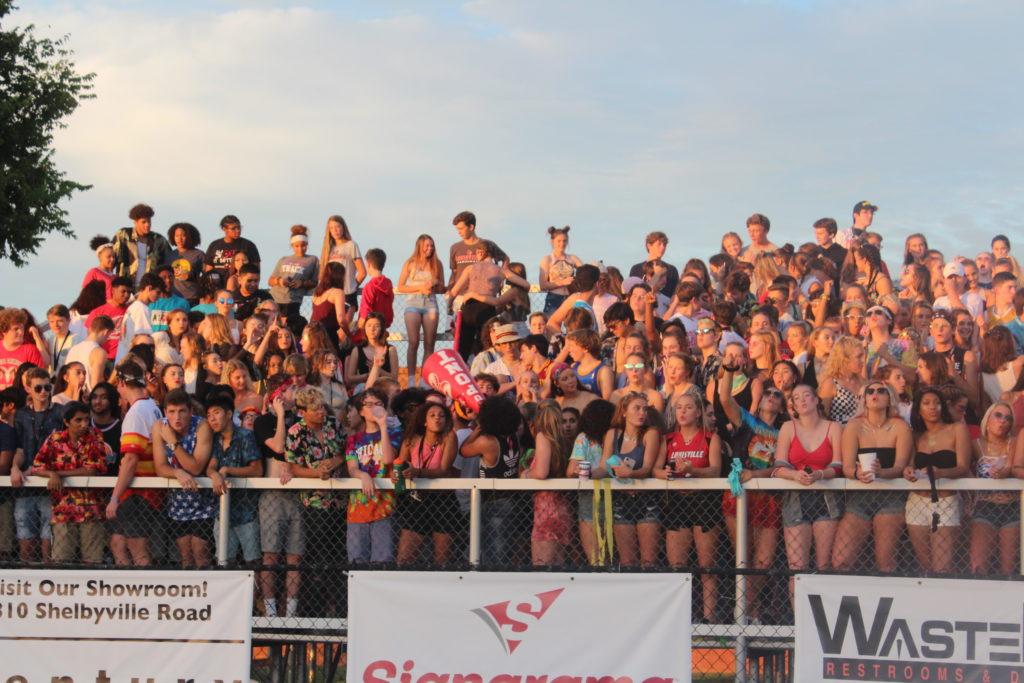 The Manual student section at the football game against Ballard, Photo by Katelyn Bale.

Football
After winning in overtime against Ballard 21-20 last week, the Crimsons will take on the  Seneca Redhawks this Friday starting at 7:30 p.m.

This will be a home game and a Crimson/Ram Card event.

Girls’ Golf
On Tuesday, the girls will have a match against North Oldham at Sleepy Hollow Golf Course beginning at 4:30 p.m.

The girls Male/Manual match will be on Thursday at Charlie Vettiner Golf Course beginning at 3:45 p.m.

Finishing off the week, the girls will attend the Kentucky Golf Course Association Girls Tournament on Saturday. The starting time is TBA.
Boys’ Golf
On Monday, the team will go up against Whitefield Academy at Seneca Golf Course, beginning at 3:30 p.m.

Starting only a half hour later, the boys will participate in the Oldham Cup, which begins at 4:00 p.m.

On Tuesday, the team will be going head-to-head with Oldham County at Eagle Creek Golf Course starting at 4:00 p.m.

After two days of matches, the team will go up against DeSales at Iroquois Golf Course at 3:15 p.m. on Wednesday.

Finishing out the week, the team will go up against Collegiate on Thursday at 4:00 p.m. at Shawnee Golf Course.
Field Hockey
On Tuesday, the girls will play Eastern in a home game beginning at 5:30 p.m.

On Wednesday, they will have another home game against PRP, starting time is 6:00 p.m.

These will both be Crimson/Ram Card events.
Volleyball
On Tuesday, the volleyball team will be hosting Eastern in the large gym, beginning at 7:00 p.m. This will be a Crimson/Ram card event.

On Wednesday, the team will travel to Butler and go head-to-head, starting time is TBA.
Cross Country
On Saturday after a week of practice, the cross country team will travel to Centerville, Ohio, participating in the Saturday Night Lights race.
Girls’ Soccer
With three games this week, the girls will go against Eastern on Monday night, starting at 7:00 p.m. at Eastern.

On Wednesday, the girls will play Bullit East at Bullit East, beginning at 7:00 p.m.