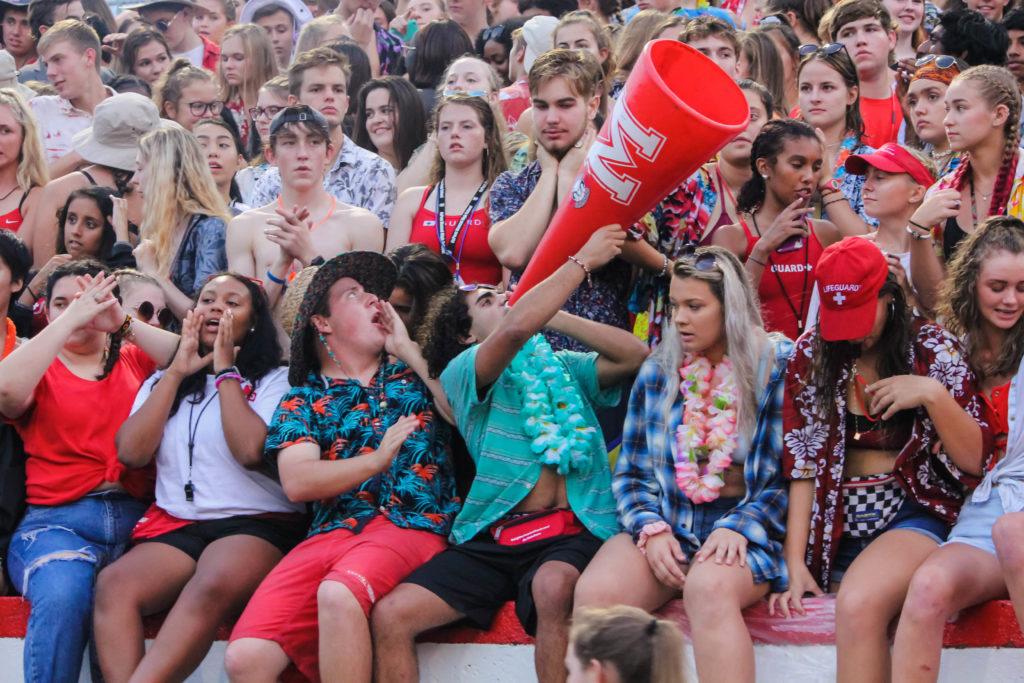 Seniors at the head of the student crowd cheer on the team as Manual continues to score another touchdown. Photo by EP Presnell.

The Manual Crimsons defeated the Seneca RedHawks on Friday during the homecoming game with a score of 50-0, making the Crimsons 4-1 for the season.

Seneca’s nearly nonexistent defense allowed the Crimsons to make several impressive offensive gains. Manual played mostly varsity freshmen and sophomores as they knew this would be an easier game than most.

“We just did what we needed to do to win the game. Get in and get out, that was our goal,” Manual’s head coach, Scott Carmony, said.
First Half
Seneca received the first kickoff but was unable to move the ball down the field and actually lost yardage due to Manual’s strong defense that continued to sack Seneca’s quarterback.

Manual’s offense was able to quickly score following the first punt from Seneca, especially considering the punt only put them 26 yards away from a touchdown.

Manual’s JuWaun Northington (#34, 9) made the first touchdown, making the score 6-0. Manual was later able to score two points from a safety after Seneca’s punter lost control of the ball in the end zone, making the score 8-0.

“We’re really thinking about next week against Butler. We’re going to practice hard, watch films and do what we need to do,” Saunders said.

Seneca was never able to move the ball down the field during the first half and usually never made it past Manual’s 25-yard line before being forced to punt it.

“We showed up strong at the beginning. That’s what we had to do to get the younger kids playing time. That’s what we came here expecting to do and what we wanted,” Overstreet said.

Once one team becomes 36 points ahead of their opponent, the game clock continues to run regardless of the outcomes of plays.

DeAaron Robinson (#20, 11) scored the last touchdown of the half to put Manual 44-0 after a successful two-point conversion.
Halftime
The homecoming halftime show consisted of performances from the Dazzlers and the Crimson Sound before and after the homecoming court, respectively.

Second Half
At this point, both Manual and Seneca were ready to wrap the game up. They began playing eight-minute quarters, and again, the clock never stopped running.

Manual’s offense and defense both began to weaken during the second half, allowing Seneca to gain more yards each time they had possession of the ball and causing the Crimsons to struggle to get first downs.

Manual allowed freshmen running back like Northington to play for a lot of the game but when the Crimsons were faced with third down, they brought in some of the more well-known runningbacks like DeAaron Robinson to finish the job.

Johnson made his second touchdown of the night to give Manual the 50 point lead over Seneca. Darius Brown (#13, 9) later intercepted a Seneca ball but due to Manual’s weakening offense, the ball didn’t go anywhere.

Seneca’s only decent offensive play of the night came within the last two minutes of the game where the RedHawks caught Manual’s defense off guard.

The RedHawks were able to carry the ball all the way to the Crimson six-yard line but Manual sent in some of their best defensive players to halt any attempt to score from Seneca.

“This doesn’t prove that we’ve really gotten anywhere just because it wasn’t that great of a challenge. Next week the games will really start to count,” defensive tackle Jake Bruce (#76, 10) said.