CIA leader Haspel speaks at U of L 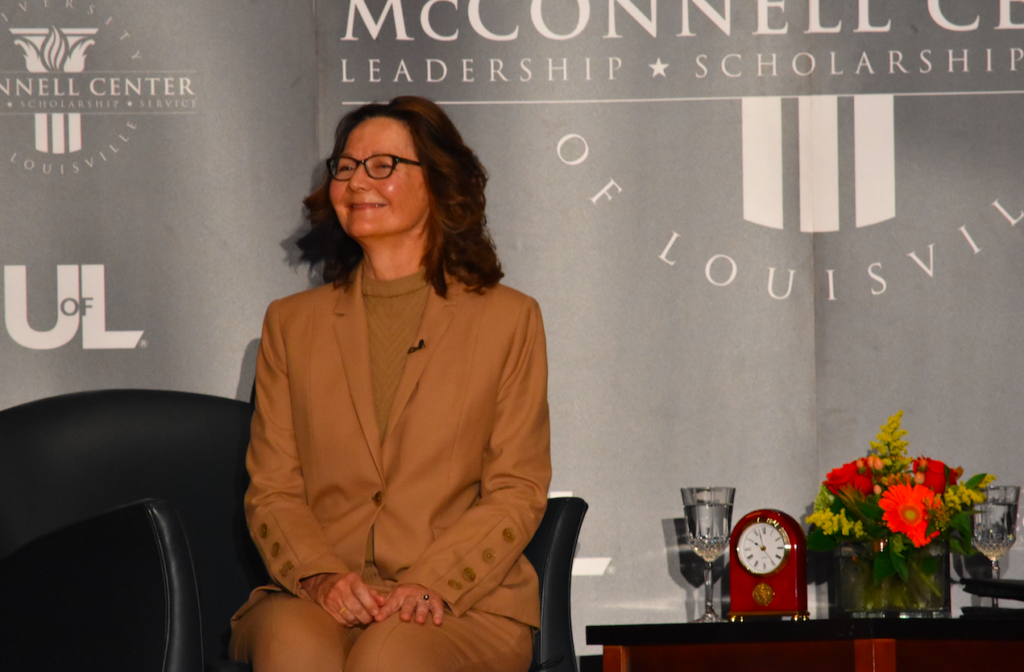 Gina Haspel smiles at an enthusiastic and applauding crowd as she joins Mitch McConnell and Scott Jennings on the stage. Photo by Piper Hansen.

The first female director of the Central Intelligence Agency (CIA), Gina Haspel, spoke about issues regarding her priorities at the agency, foreign intelligence and her roots in Kentucky when she visited the University of Louisville this morning as part of the Distinguished Speaker Series hosted by the McConnell Center.

After being introduced by both University President Neeli Bendapudi and Senate Majority Leader Mitch McConnell, Haspel discussed her status as the first female CIA director.

“Teamwork is the only way we can defeat foreign challenges,” said Haspel, who was born in Ashland, Kentucky and graduated from the University of Louisville.
Advocating diversity
Haspel hopes that the future of the agency will be “more inclusive” and will “champion diversity.”

She said she would achieve diversity by recruiting officers of all genders, races and ethnicities.

Aside from a future invested in diversity, Haspel sees a future in gaining intelligence “against nation-state adversaries as well as Islamic extremists.”

Haspel explained that she begins her day with a binder full of domestic and foreign intelligence gathered overnight, including documents, transcripts of audio recordings and imagery.

During the forum, Haspel also mentioned that she would love to have as many agents and officials stationed overseas as possible. She discussed language barriers and hopes that CIA agent training in the future will include extensive teaching.

Throughout her address and the forum, Haspel advised University of Louisville students to “prepare themselves with education” and to “raise your hand when the hard jobs arise,” she said.

The crowd contained many active and retired members of the U.S. Armed Forces and ROTC programs, as well as several McConnell Scholars, including 2015 Manual graduate Natasha Mundkur.

“I’m a political science major so it helps to come to talks like these to understand and see things from a different perspective,” Mundkur said.
Controversy and protest
Before being confirmed for the CIA director’s position, she worked in clandestine service for 33 years. Her confirmation was controversial due to her involvement in the CIA’s torture program.

Following her confirmation Vox reported that Haspel advised “secret prisons the CIA set up […] to hold and torture suspected terrorists away from the prying eyes of lawyers, human rights groups, and the American public […] in Thailand” called “black sites.”

Later in the article, Vox revealed that Haspel “was directly involved in the destruction of nearly 100 videotapes documenting the CIA’s brutal interrogation and torture of two prisoners.”

A small group of protesters gathered outside the event venue, chanting “if we don’t get no justice, you don’t get no peace” and carrying signs decrying Haspel and her past work in the CIA.

“Personally I don’t believe in the current federal government, the current administration or anyone appointed by the administration,” protester and University of Louisville student Isai “Izzy” Sanchez said. “Gina Haspel has been known to be a war criminal and ‘Bloody Gina’ amongst her peers at the CIA […] and that’s not the person who I want in [a director] position.”

As the protesters chanted, two professors argued with security officials about their First Amendment rights to protest on campus property.