The flood that changed Louisville forever 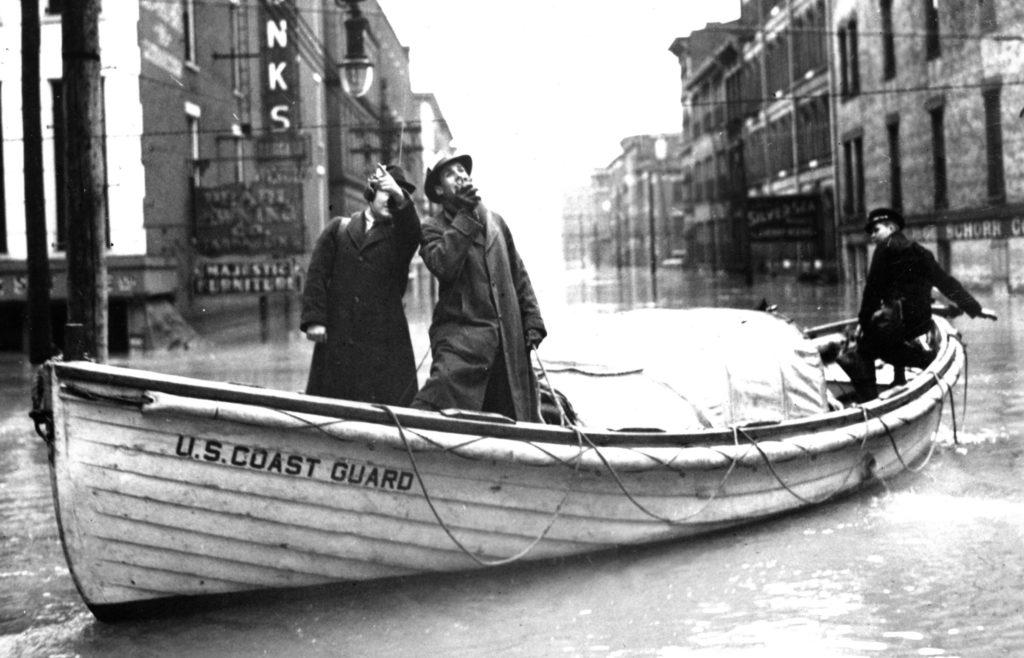 Coast Guardsman transports radio reporters detailing the flood’s devastation. Photo is under public domain on Coast Guard Compass. Use of this photo does not indicate photographer endorsement of this article.

Hurricane Florence recently devastated coastal areas of North and South Carolina. Although the hurricane itself has mostly died down, the flooding from the storm is still incredibly dangerous.

The hurricane’s rains caused the Cape Fear River to rise 58 feet, covering most of Fayetteville, North Carolina in water. Many other cities, such as Lumberton and Wilmington, are also suffering intense flooding.

Damage from the hurricane is expected to be around $22 billion, and the storm has killed at least 32 people. Rescue and relief operations are ongoing to help people who have been stranded by the deadly waters.

The city of Louisville rarely has to concern itself with hurricanes. The Derby City is hundreds of miles away from the east coast, and tropical storms almost never survive long enough to do any significant damage here. That does not mean, however, that Louisville is safe from natural disasters.

While we might not have to worry about hurricanes, the city is highly susceptible to dangerous flooding. In fact, 81 years ago, Louisville was the site of one of the most dangerous and deadly floods in American history; The Great Flood of 1937.

In January of 1937, it rained constantly over Louisville, and the city received over 20 inches of rainfall in less than a month. The Ohio River began to flood rapidly, and for 19 days, 70 percent of Louisville was completely submerged, and 90 percent of Jeffersonville was underwater. The flooding crested at 85.4 feet, the highest ever recorded in the area.

The flood caused massive damage to the city and the people living in it. Ninety people died, and 230,000 people were forced to evacuate. Rescuers in boats paddled down the city streets, rescuing people who were trapped on the roofs of houses.

There weren’t enough boats to get everyone in downtown to safety, so citizens built a bridge out of empty whisky barrels, which they used to escape to the Highlands.

In Louisville, flood damages ended up costing $250 million, which, adjusted for inflation, is over $3.3 billion in the modern economy.

After the flood waters eventually receded, the people of Louisville immediately took preventative measures to ensure such a disaster never occurred again.

The Great Flood of 1937 also led to the Army Corps of Engineers building a 29-mile long floodwall around the city, called the Ohio River Flood Protection System.

Even though it’s been generations since the Great Flood of 1937, its effects on Louisville can still be seen today. The Ohio River Flood Protection System still works to prevent a flood that powerful from devastating the city again; Saint Matthews and the Highlands are some of the most prosperous areas of Louisville; and in certain buildings downtown, and on street signs in the West End, one can find flood markers, immortalizing the incredible disaster that changed Louisville forever.

Featured image citation: Coast Guardsman transports radio reporters detailing the flood’s devastation. Photo is under public domain on Coast Guard Compass. Use of this photo does not indicate photographer endorsement of this article.