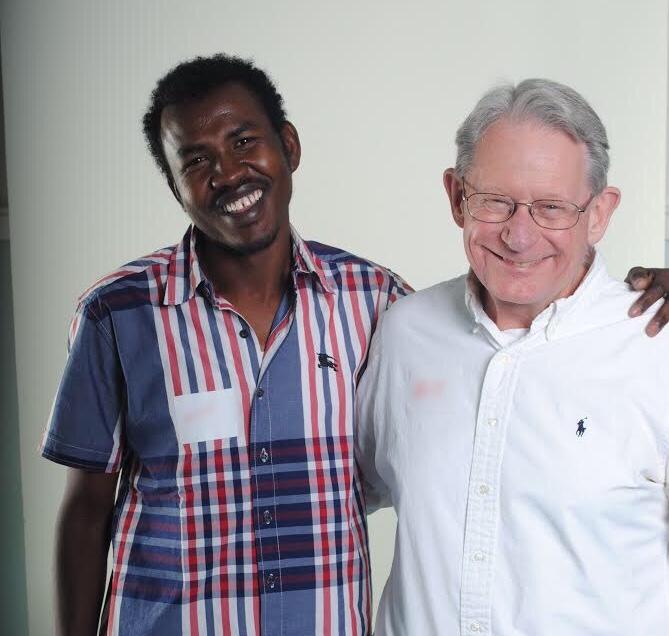 Fifteen people stand against the walls of a cramped lobby in the basement of the Iroquois public library. Some are wearing jeans and t-shirts and others are wearing head scarves or shawls. All are wearing name tags. Some people are chatting, some have papers. From a nearby room, lively chatter drowns out any other sound. A small, energetic blonde woman is bouncing back and forth between the rooms.

She runs into the lobby, grabs a couple people, introduces them to each other and then sends them into the next room with a sheet of paper labeled “Conversation Starters.”

In the next room there are nine tables. People are sitting at them talking to their neighbors. A few are playing chess or cards. In the middle of the room are a few carts with board games stacked haphazardly and a bowl of fruit.

The blonde woman, Sophie Maier, directs the pair to a table then goes back to the lobby to find another two people to match up. Maier pairs a fluent english speaker with someone that is still learning the language. The goal is to help the struggling english speaker learn english through regular conversation. Maier pairs them based on language skill, interests or occupation. From there, they can talk about anything from their favorite color to political issues.

Maier is the founder of this program called the English Conversation Club. Maier founded the club in 2001 when she got a job at the Iroquois Library that was specifically aimed at helping the community. “It seemed like the community we should be focused on is immigrant refugees,” Maier said.

She realized that if she wanted to engage the refugee community, she first had to help get rid of the communication barrier.

“Of course what I do first is English, because people need to work and get jobs, talk to their child’s teacher, talk to the doctor,” Maier said. “And not only is it better for language acquisition, it’s better for making people feel welcome.”

The club is beneficial to the volunteers too. “There are old white folk who had been in this neighborhood for generations who are coming in with just pure, pure curiosity,” Maier said.

Austin Newland (12, MST) is a volunteer at the english conversation club. He likes that the club is able to integrate culture into Louisville and at the same time help refugees learn the language the way it is spoken in Louisville. “I feel like [the conversation club] is useful because It introduces newcomers to our city, into the culture that is more common around here and in turn that helps us both gain diversity and in turn helps them as well.”

There are over 130 languages spoken in JCPS alone. JCPS does offer free English classes for refugees, but there are less and less as time goes on. “The number of classes have shrunk, in a time where it should be expanding,” Maier said. “When it comes to immigrants and refugees, they aren’t the best advocates for themselves, because they don’t speak english.”

According to the Kentucky Center for Economic policy, refugees are not limited to JCPS. In general, Kentucky resettles more than twice the national annual average number of refugees. Because of the high number of refugees in Kentucky, the problem with the language barrier is larger here than in most other places.

Maier’s aim is to make the barrier smaller. Iku, who moved to Kentucky from Japan a year ago, takes part in the program.  “I was looking [for] some people to help. English is my second language and I saw on a website and some newspapers talking about this library having the biggest english conversation club,” Iku said.

She likes the variety of conversation that she can find at the english conversation club “Right here I can talk a lot of different topics,” Iku said. “It’s fun.”

The English conversation club relies on the participation of volunteers. When the club was just starting out, Maier would go to colleges and speak about foreign culture and in exchange, the professors would require their students to volunteer. But people would come back.

David Grupper (℅ ’87) volunteers at the English conversation club. He likes the fact that he can help the refugee community. “We need to kind of show up for immigrants and this is where it’s at,” Grupper said. “I don’t do much but I figure, doing this little bit is something I can do.”

At the end of the meeting, Maier gets up on a chair and yells out over the chatter that the meeting is about to end, but that people can feel free to continue talking until the library closes. After Maier’s announcement, some people stand up and some carry on their conversation.

People exchange numbers, some people shake hands. Maier is in her office, available to sign hour sheets. There is still a buzz of chatter that hangs over the room, some people keep talking as they walk out the door.

When people discuss conversation club, they most talk about the interesting people they meet. People form lasting friendships here. “I met Herman today, he’s got an amazing history and I met a guy named Paul two weeks ago,” Grupper said “I learn something every day.”

“You’re sitting next to someone, and you’re talking for two minutes and you find out ‘I’m a Darfuri, I’m alone here and I lost everyone’ and they’re smiling and will then say ‘And how are you? How’s your day going?’” Maier said. “Suddenly, I mean just that quickly within that exchange, people’s perspective changes and understanding-you know privilege is a word that’s used so often- but just profound privilege. So I think it’s a good experience.”