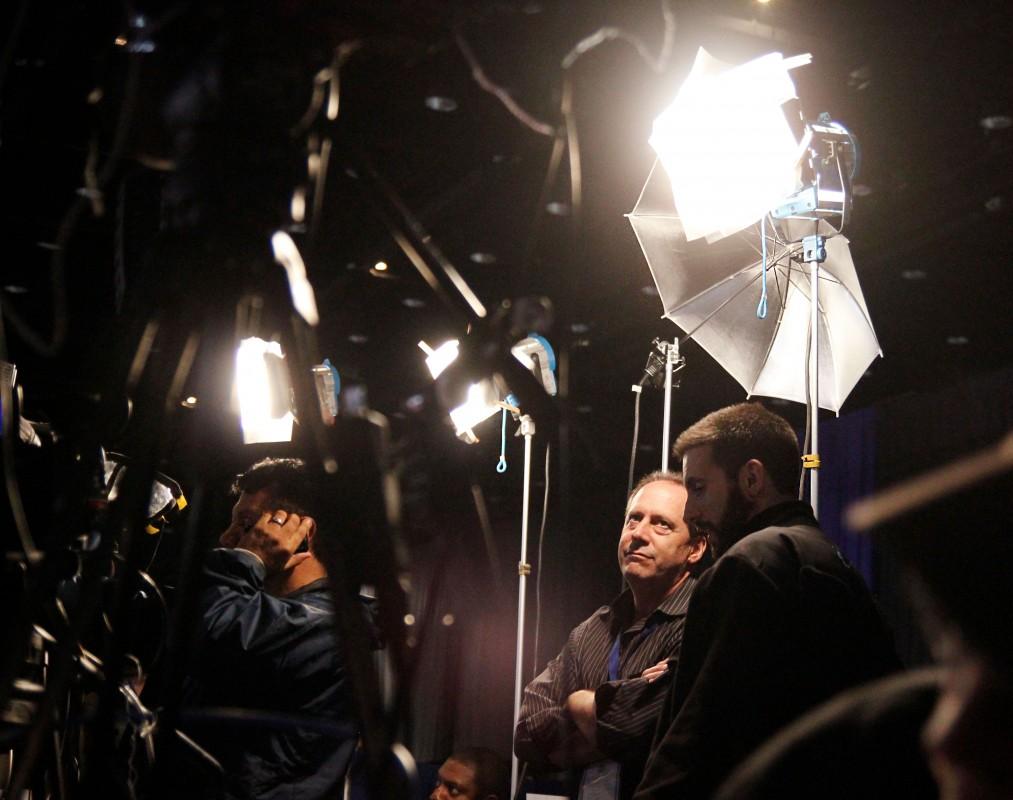 Reporters from national and international news organizations fight to secure a spot in the media section to set up lighting and camera equipment in several hours before guests of the Obama rally arrive.

While we all love sitting down in the comfortable movie theater seats with our overpriced snacks and turning our brains off to watch a Hollywood blockbuster, it’s important to take into account the number of films produced by filmmakers in Louisville. In the upcoming months, multiple film festivals will show off the work of local creators. Here are some you might want to check out.
1. Louisville’s International Film Festival
Dates: Oct. 12-14

Price: Varies. One day passes are $15 and weekend passes are $25, but more are available for cheaper and less.

Louisville’s International Film Festival (LIFF) is a three-day event that will feature a variety of films covering multiple genres and themes. Over 130 films will be showcased, including the Kentucky Youth Film Festival (KYFF) entries. Proceeds from this event will help expand educational opportunities for film programs such as the one found at Fern Creek High School.

Tickets are on sale now!
Make sure to grab yours as you will not want to miss the amazing scope of films at this years festival!https://t.co/1JUUjIs3oK pic.twitter.com/QzzL1fjTJv

— Louisville Film Fest (@LouFilmFest) August 21, 2018
In addition to aiding high school programs, two new scholarships are being added that will help one creator in their film career. One is the Matt Berman Scholarship, the winner of this will receive production assistance and a trip to Los Angeles where they will get an up-close look at film production. You can purchase tickets here.
2. Louisville LGBT Film Festival
Dates: Oct. 12-14

Price: Individual movie tickets are $8 and weekend passes are $40.

Similar to the LIFF, the Louisville LGBT Film Festival (LLFF) is also a three-day long event. The festival will show six feature films with one on the 12, three on the 13, and two on the 14. In addition to the features, there will be six shorts ranging from five minutes to 23. For full summaries and trailers for the films, click here. You can purchase tickets here.

Our official schedule is now available! Check out more information and trailers on our website. Get your advance weekend passes ($40) or individual session tickets ($8) now, before they go to regular price ($50/$10) at the door. Come and see your… https://t.co/E7j3dTKJQ1

The Kentucky Youth Film Festival (KYFF) is an aspect of the LIFF, though it is unique amongst the rest of the films entered. All films in this festival are made by teens from grades nine through 12. Entries come in four different varieties: documentaries, short films, public service announcements (PSA), and cell phone films. In addition to having their films showcased, winners will recieve awards for the best in each category. Mr. Abplanalp’s (J&C) students have entries in all categories of the festival.
4. Louisville Film Society’s Short Film Slam
Date: Nov. 7

Twice a year, the Louisville Film Society (LFS) will hold a short film slam where filmmakers can enter one film of their choice with the only criteria being that it must relate to Louisville. Ten short films are chosen at each film slam and can come in a wide range of genres and types such as music videos, mockumentaries or simple short stories.

A question and answer session will be held immediately after the film with the executive director of the LFS, Soozie Eastman. The event is recommended for ages 16 and older, but there are no official restrictions. Click here to buy tickets to the event.

See a selection of short films created by filmmakers from Louisville at the Speed Cinema this… https://t.co/g9CejhJJva