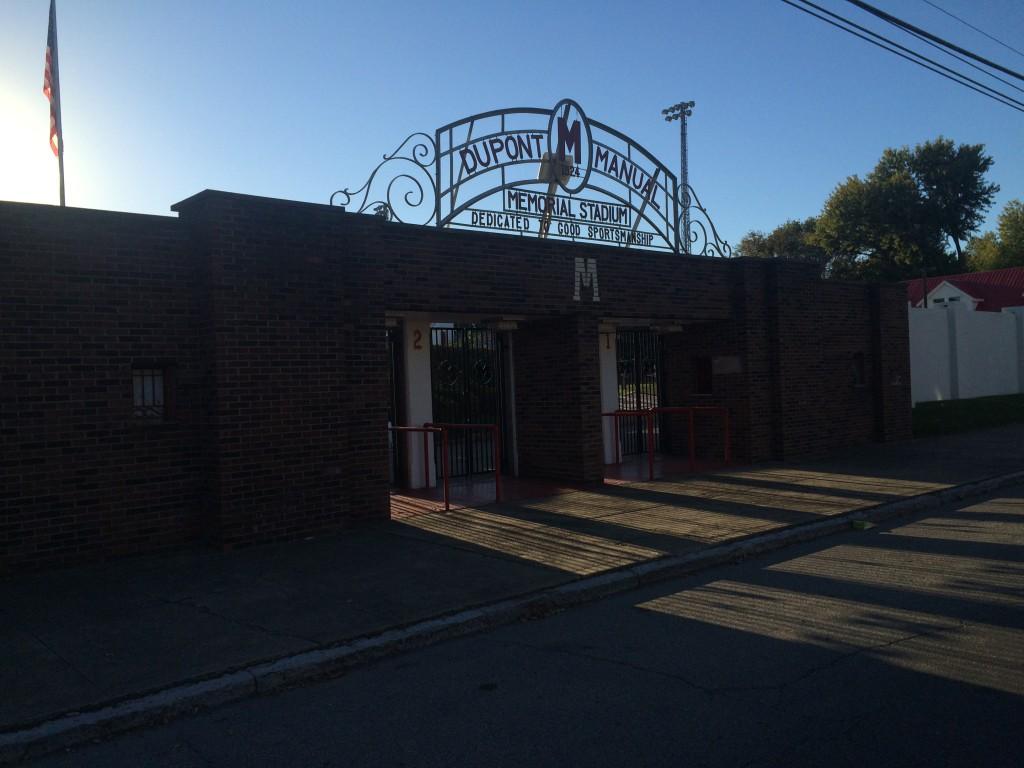 The stadium is barren as the sun sets. Photo by Amanda Tu

Each year, Jefferson County Public Schools (JCPS) contributes several of their resources to Red/White Week at both Manual and Male, mostly during the actual game.

This year, JCPS will contribute at least 10 district security officials at Male to monitor the game and assist with parking, ticket sales and admission.

It is up to individual schools to determine what they want the district to help with or provide for the game or the week.

In years past, especially in 2009, students from both of the schools got out of hand with pranks. JCPS investigated an instance where Manual students grafettied Male and Male retaliated.

JCPS suspended 25 students that year, including six members of Male’s football lineup. In addition, the district was responsible for paying for damages done to both Manual and Male property.

In other years, Manual and Male mascots have gotten into fights, requiring JCPS security and police intervention.

Schools are typically responsible for their own caretaking of the football fields, however, in the case of vandalism, the district usually gets involved to help.

Big shoutout to Paul Gambert, Manual Stadium’s caretaker, on getting the field ready for tonight’s game after all the rain we’ve had. Looks great!! pic.twitter.com/XOtnKIa6Ry

In addition to security, the district also staffs maintenance faculty to ensure smooth operations of the stadium lights and restrooms. If something breaks down, the district will send out one of their recognizable white trucks to fix it.

However, now that Gheens Academy no longer contains central office staff due to the W. E.B. DuBois Academy needing the space, the district will probably have less direct impact on the game at Male on Friday and throughout the week at school.

JCPS will continue to monitor student behavior throughout the week, including at school-sponsored events through the big game. Security protocols will be only slightly heightened for the Male/Manual game compared to other football games.

Roastmas, a popular Twitter battle between Manual and Male students, will also be monitored by Manual and Male administrators and in years past JCPS’ Compliance and Investigations department has also gotten involved.

The district allows schools to allocate funding for required athletic trainers and support staff for football teams and Male’s team is stronger than previous years. They are currently 8-0 for the season and according to the Kentucky High School Athletics Association, they are currently the top team in Jefferson County.

🏈Thur night Football @ Bryan Station….DAWGS up 57-8 at the half. pic.twitter.com/2NiZx0SUBR

Most of the fund allocations are done on a school-level at Manual’s monthly SBDM meetings when they approve school expenditures.

Regardless of the location of the game, JCPS is always willing to help out Manual and Male administrators as needed and even though the district doesn’t directly impact the two schools, the district will step in if a situation warrants it.