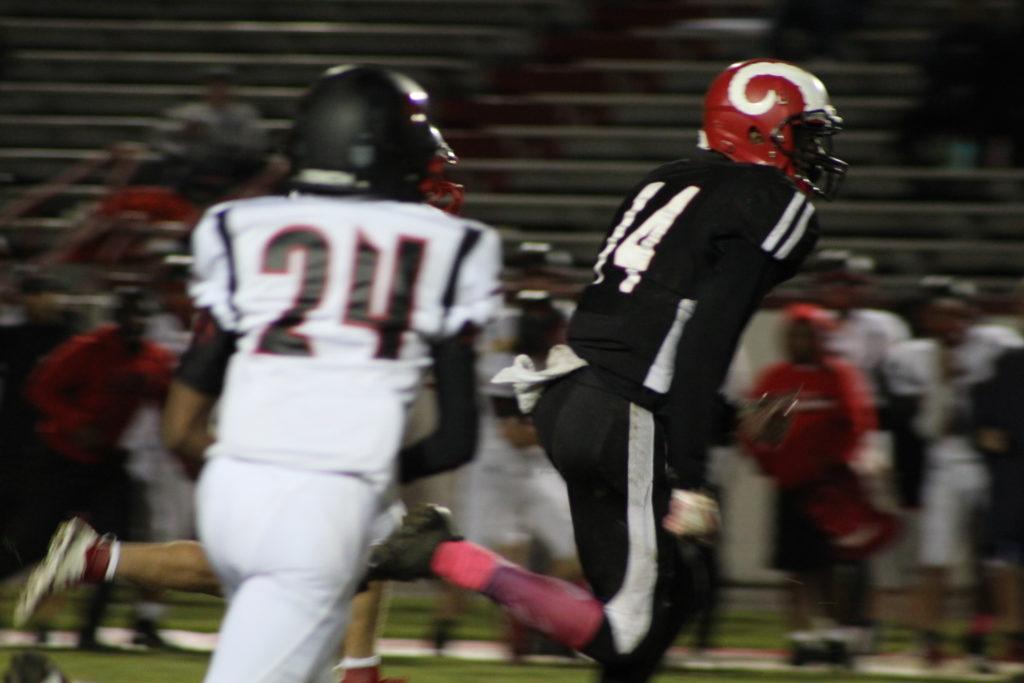 The Manual Crimsons won 17 to 14 against the Pleasure Ridge Park (PRP) Panthers last night at the Manual Stadium due to a strong offensive front.

First Quater
On the first down of the game, Ramont Townsend Jr (#26, 10) ran the ball 70 yards down the field for a touchdown, making the score 7-0 thanks to a successful point after touchdown (PAT).

“There was a big hole, I just ran through it,” Townsend said.

The early score immediately heightened the energy of the game. After the turnover, which put the ball at the 21-yard line, the PRP offense battled their way to the 45-yard line, where a penalty against Manual brought the ball to the 50-yard line.

From there they managed to get all the way to the 2-yard line, bringing the stands to their feet, before Manual’s defense pushed them back to the 7-yard line. The Crimsons kept them there, thwarting a desperate field goal attempt and winning the ball.

On their second down Townsend recreated his earlier triumph, running the ball from the 35-yard line in for a touchdown and bringing the score to 14-0 after the PAT kick. After a series of back and forths, with incomplete passes and flags on both teams, the first quarter ended on the 20-yard line.
Second Quarter
Both teams started off making mistakes in the second quarter, with a Crimson fumble and the PRP offense gaining only 5 yards in 4 downs. A blocked punt gave PRP the ball, which Jaden Knox (#24, 10) carried for a touchdown. After a missed PAT, the score was 14-6. The rest of the quarter was a back and forth battle across the field, with neither team scoring any points.
Third Quarter
After more back and forth, Patrick Holdener (#91, 10) kicked a field goal, bringing the score to 17-6. For the rest of the quarter, it seemed as though the ball only moved on turnovers.
Fourth Quarter
PRP attempted a field goal but missed, Manual moved 3 yards in 4 downs, and with 2:10 left in the fourth quarter, Panther Darius Yates (#5, 12) scored a touchdown. A successful two-point conversion run brought the score to 17-14, with Manual leading by 3 points. The Crimsons received the kickoff at the 49-yard line and 2 minutes later, Manual won the game by three points.

“We all came out to play, and we played hard,” Townsend said. “It’s a great win,” Manual head coach Scott Carmony said.

PRP Head Coach Tommy Williams agreed with Carmony, adding that although his team has faced some losses recently, they were able to fight well. “We got down 14 to nothing early, but we were able to fight back to a 3 point loss,” Williams said. “Ultimately I’m walking away proud of the way they fought.”

Panther Maurice Sodja (#6, 11) added that his team knew it would be a difficult game. “We came out this game and we knew we had a fight,” Sodja said.