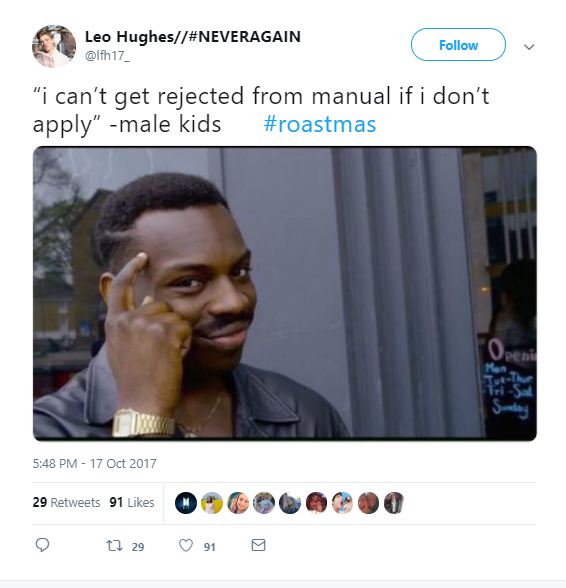 A roast from the annual Roastmas

“i can’t get rejected from manual if i don’t apply” -male kids #roastmas pic.twitter.com/avlavwYnhg

Every year, on the Sunday before the Old Rivalry football game, students of Manual and Male engage in a tradition called #Roastmas. Roastmas is an exchange of insults between students that builds excitement for the upcoming football game.

Unfortunately, it’s not all fun and games at Roastmas.

In the past, people have raised concern about cyberbullying, as well as the racist and classist themes that have been prevalent during the last few occasions.

While Roastmas certainly sees its fair share of abusive comments, that doesn’t mean that we should condemn the it in its entirety. Roastmas is a fun tradition, and we should focus on making it better, not erasing it.

I’m not suggesting that we should ignore the occasional abusive and hateful comments that come out of Roastmas. Schools should consider those comments to be the responsibility of the poster, and handle them like they would any other case of cyberbullying. This way, the people who are just having a little bit of legitimate fun during Roastmas can still enjoy the event.
How to roast responsibly
If you want to partake in the Roastmas festivities, but aren’t sure if your post is okay, here are a few pointers.

First, and most importantly, don’t make racist or classist comments. This has been a big problem in the past, with Male kids poking fun at Manual’s large population of Asian students, and Manual kids claiming that all Male kids will become minimum wage workers. These comments are particularly nasty, and while some people will undoubtedly make them, that doesn’t mean you have too.

Secondly, avoid insulting any one person individually. Tweets targeted at one students are bullying, plain and simple, and should really be avoided. Roastmas should not be about shaming people for who they are or how they look.

So how do you make an acceptable roast?

male kids trying to think of something clever to say for #roastmas this week pic.twitter.com/klUIBhShAS

Tweets that make fun of either school’s athletics and academics are generally fine, as well as comments insulting a school’s traditions, or their Spirit Week themes. So long as you’re insulting the school in general, and not any particular individual, you should be good to go. If you need inspiration, you can check out some of the Tweets featured in this article.

The Old Rivalry game is fast approaching, and there’s nothing like a little friendly smack-talk to get things started. Just be sure that the rivalry doesn’t lead you to say something you might regret.