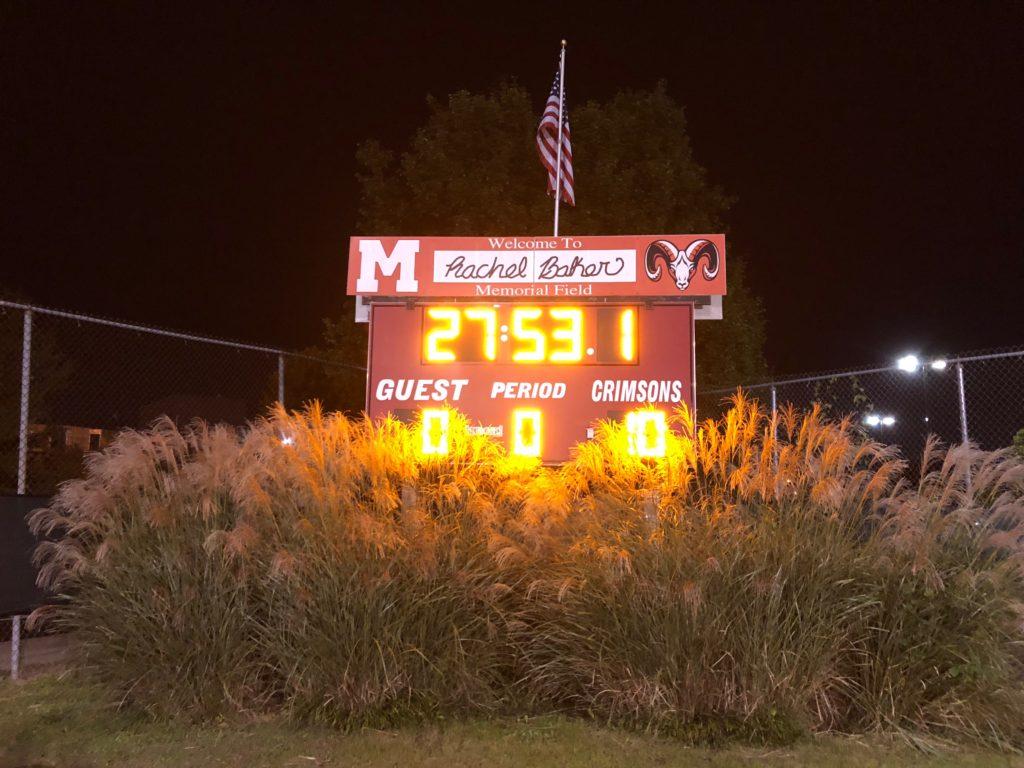 1st Half
The first half opened up with two quick goals in the first three minutes from India Reed (12, #17), making the score 2-0.

After that, the Crimsons quickly brought the ball back up the field which lead to a goal by Cates Doyle (12, #13), pushing the score up to 3-0.

The dominance continued with two more goals just three minutes after the last by Cora Kirby (12, #33), increasing the score to 5-0.

Manuals offense began to slow down, as they didn’t score again until 14 minutes left in the 1st half. Another goal by India Reed gave her a hat-trick, making the score 6-0.

After that, Reed scored her fourth and final goal on the night to make the score 7-0.

The scoring showcase put on by the seniors continued with another goal by Cameron Tucker (12, #22) to put the Crimsons up by 8-0.

Cora Kirby scored the final goal of the half to give her a hat-trick, making the halftime score 9-0.
2nd Half
Although the score suggests complete offensive power, the real highlight was the defense shown by the Rams that held the Bears to a scoreless game, barely allowing them to get the ball past the half yard line.

Three minutes into the second half, Ellie Wheatley (11, #7) ended the game with a hard shot, making the final score 10-0 in a huge win for the Crimsons.

When a team scores 10 points above their opponent, according to the JCPS Field Hockey Rules, this would be considered a ‘Mercy Rule’ and the game would end at that point.

After the game, Manual’s head coach Brittany Tolan emphasized how proud she was of her captains’ leadership and of the team’s hard work.

Manuals next game is tomorrow afternoon at 5:00 p.m. on the Rachel Baker field against Presentation Academy.

The parents of the seniors celebrated with standing ovation and presentation of their daughters’ accomplishments and goals before the game.

The field featured a huge solo-cup mural that read ‘We <3 Seniors” and banners of each individual senior.

“I’m extremely grateful for what our seniors have done for our team and the passion and hard work they’ve put into improving our team is amazing and inspiring,” said Manual’s Head Coach Brittany Tolan.

“I love my team and the four years I’ve spent with them and I couldn’t ask for a better team to play field hockey with!” Said senior Brooke Bollinger.

my team of supporters > Huge thank you to all of my friends, family, and every coach I’ve ever had for guiding me to where I am today with an extra special thank you to my team of doctors and physical therapists at Cardinal Station for getting me back to doing what I love. I appreciate everyone who has ever helped me but especially the BEST mom in the world. I love you all endlessly❤️ thank you @manualfieldhockey