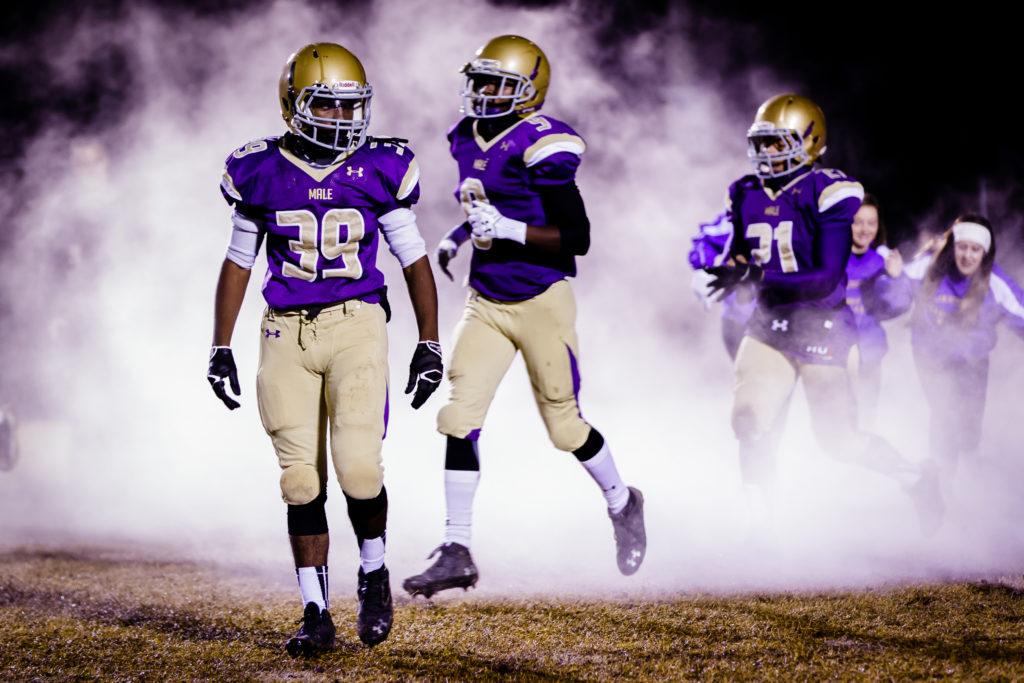 "Let's Do This" by Shannon Tompkins on Flickr is licensed under CC BY-NC-ND 2.0. No changes were made to the original photo. Use of this photo does not indicate photographer endorsement of this article.

The Old Rivalry first began in 1893 so the game is rich in history and has dramatically changed over the years. However, one thing remains the same, Male is always cast as the enemy from Manual’s perspective. But the Bulldogs are just as excited about the Male v. Manual game as the Crimsons are.

This week they celebrated with themed days just like Manual. Their entire week was a circus theme but each day was more specific: Monday was Mime Day, Tuesday was Animal Day, Wednesday was Beach and Tourist Day, Thursday was Spirit Day and Friday was Male’s Doomsday.

Manual RedEye had a chance to talk to Male students to get a sense for their community, the real differences between the schools and their thoughts on the possibility of keeping the barrel for another year.
Male’s community
Differences and the build up of the Male v. Manual rivalry aside, Male students explained that their favorite part about going to Male was how inclusive clubs and sports are.

“It’s fun to go to sporting events and chat with all my friends and rally with the players to have some sort of common identity,” Male junior, Tate Luckey, said. “No one feels left out here at Male, and that helps unite us because you can always find some club or social group to be a part of.”

From Y-Club to powderpuff to an organization similar to Manual’s Executive Council, Male students are happy to have such a large, close-knit group of students.

“The thing that unites our school is the community,” another Male junior, Lexie Overstreet, said. “I’m constantly surrounded by passionate and inspiring people.”

Male students agree that it’s their passion that drives their school spirit and why they believe their school is better than the rest.

“I definitely feel like Male is better than the rest during this current football season,” Overstreet said. “We’re 8:1, only having lost to Saint Xavier High School. Our student section shows out for almost every game. We tailgate, we cheer and we constantly support our fellow Bulldogs.”

But it goes deeper than football in terms of the Bulldog’s passion.

“The first and second floors of the Gheens Building used to house students from foreign countries which was called the ESL Newcomers Academy,” Luckey said. “Our school helped organize a donation for them of coats, blankets, scarves, basically anything winter related.”

The experience helped both parties involved.

“I thought, ‘man, this is awesome. We really helped out so much in such a small way,'” Luckey said. “I’m really glad I get to do stuff like that here at Male.”
Male on Male v. Manual week
While the Old Rivalry is recognized all over the country, Male students cherish their special connection.

“[During Male v. Manual week,] I’ve had various strangers tell me that they knew someone who went to Male, or were an alumni themselves,” Luckey said. “It really helps solidify that we’re one of, if not the best school in the state of Kentucky.”

Just like Manual, Male students go all out with their costumes and decorations in preparations for Friday’s game.

“My favorite part about Male v. Manual week is the hallways,” Overstreet said. “I love walking in on Monday to streamers hung from the ceiling and posters all up and down the hallway. It’s something that most schools never get to have.”

Each student, of course, has their own preferences about the best parts of the week.

“My favorite part [about the week] is the fact that I can finally wear sweatpants,” Luckey said jokingly. “But real talk, it’s probably how creative everyone can be with the themes each school presents.”

Barrel or not, Male students are extremely proud of their school and their team.

“Even when it’s stressful, I still feel lucky to go [to Male],” Overstreet said. “We all look out for each other.”

“Let’s Do This” by Shannon Tompkins on Flickr is licensed under CC BY-NC-ND 2.0. No changes were made to the original photo. Use of this photo does not indicate photographer endorsement of this article. Click here for the full license.