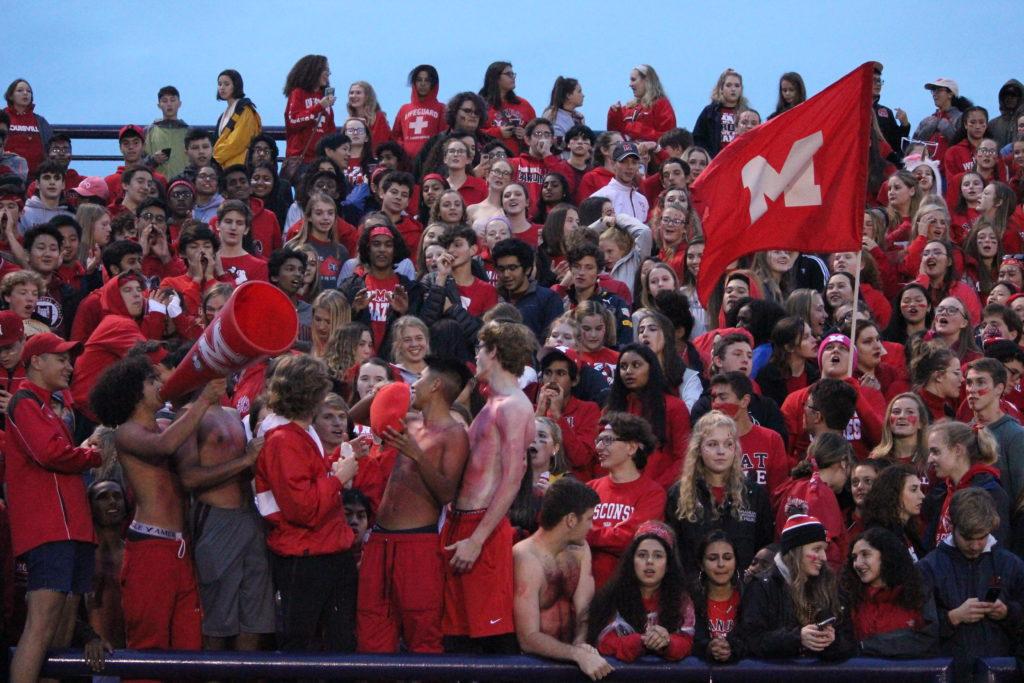 As students arrive at Male's stadium, upperclassmen get the crowd excited for the game. They brought everyone together by singing "Happy Birthday." Photo by Emma "EP " Presnell.

The Male Bulldogs defeated the Manual Crimsons last night in the Old Rivalry game with a score of 48-0 due to a strong Male defense and a weak Manual offense, most likely due to Manual’s many injuries incurred earlier in the season combined with the wet field conditions.

The final score is 48-0, Male. pic.twitter.com/kDXrUYcJxh

Male’s Garrett Dennis (#7, 12) had a strong night, including several successful passes and touchdowns. Dennis was able to score a rushing touchdown on the same drive, however, Male attempted a two-point conversion that was unsuccessful. The score was 6-0.

The Crimsons received the ball from Male and were making significant, albeit slow, process down the field. Manual’s quarterback attempted to throw the ball to the running back but instead fumbled the ball, allowing Male to recover it and regain possession.

Dennis threw the ball 65 yards to put it at Manual’s goal line where he again rushed for a touchdown to make the score 13-0 after a successful kick.

Male’s defense forced Manual, upon receiving the ball again, to punt the ball on fourth down. This was a recurring theme throughout the game.

“We needed to score right away with the rain coming because I didn’t want to rely on scoring if it was pouring rain,” Male head coach Chris Wolfe said. “Garrett found the open guys and made some really tough plays for us.”
Second quarter
Male began the second quarter inside the Crimson’s 20-yard line, eventually allowing Dennis to pass to wide receiver Geremiah Edison (#4, 12) for a touchdown, making the score 20-0 after a successful kick.

Manual and Male exchanged punts for a period of time during the second half until Manual decided to try a run play on fourth down rather than punting it. This resulted in a turnover on downs and gave Male possession of the ball.

“We just didn’t play Manual football tonight,” running back Ramont Townsend (#26, 10) said.
Third quarter
Male kicked off to Manual after halftime but the Crimsons didn’t seem to take advantage of the opportunity. Not only were they forced to punt the ball to Male, but they botched the punt, giving Male possession of the ball just 28 yards away from the end zone.

Once again, Male kicked off to Manual and on fourth down, Manual gave it back to the Bulldogs with a punt.

“We put our all on the field. That’s all I can really say because it’s two good teams playing each other, and you know, the best team won,” running back DeAaron Robinson (#20, 11) said.
Fourth Quater
Manual and Male both exchanged possession at the beginning of the fourth quarter, eventually allowing Male’s Devon Stratton (#49, 10) to rush for a touchdown, making the score 48-0.

“We would’ve had to execute everything perfectly and we didn’t do that. They just beat us on this one,” center Landon Miller (#61, 10) said.

Male kicked off to Manual but Manual didn’t go very far with the ball and decided to let the clock expire rather than attempt a final play.

Manual’s final game of the regular season will be next week at Manual Stadium against Eastern at 7:30 p.m. Their first playoff game will be the following week against North Hardin.