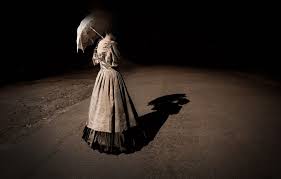 During the Halloween season, many people celebrate with the tellings of ghost and scary stories. Here are five ghost stories that are apparent here in Louisville to spook up your Halloween night.
Kentucky Pope Lick Monster
The Kentucky Pope Lick Monster is a half-man, half-goat creature. This creature supposedly lives under a trestle-bridge over Pope Lick Creek. Many people have died on and around the trestle and some rumors say that the monster lures victims onto the bridge to die by standing in front of an oncoming train. Other rumors say that the mere sight of the creature is horrifying enough to drive people to jump off the bridge and take their own life.

The Killer Ghost of Eastern Kentucky
The story of The Killer Ghost of in Eastern Kentucky goes that in June of 1938, Carl Pruitt came home from work to find his wife in bed with another man. Enraged, he strangled her to death with a chain and then, after realizing what he had done, took his own life. A while later, his gravestone began to show discoloration in the shape of a cross. Since then, there have been numerous stories of people who have disrespected or damaged the grave, being killed in freak accidents in which they were strangled with a chain, with the grave being perfectly complete the next morning.
The Witches’ Tree
The Witches’ Tree myth comes from a deadly earthquake that hit Louisville during March of 1890. The earthquake killed over 100 people and a local legend spread that it was not Mother Nature that made this storm happen but that it was the witches in the area. This tree is at the corner of Sixth Street and Park Avenue in Old Louisville. The legend says that the witches would get revenge on anyone who tried to cut it down. The city’s planning committee tore it down in 1889 and because of this, the witches brewed a storm to kill the residents of Louisville. Lightning apparently struck the stump of the old tree during the storm and sprout a new one in the same spot.

The Headless Woman of Iroquois Park
The Headless Woman of Iroquois Park is a spirit who haunts the area of Louisville, roaming the park at night while carrying her own head. She is rumored to be the spirit of an old farmer’s wife who lived in the area many years ago. One night, a group of Native Americans snuck in and raided the house, cutting off her head and then burning the house down. People say she still wanders around the park and you can sometimes see her wandering through a cloud of fog and smoke.
The Jailer’s Inn
The Jailer’s Inn is about a rental house in Bonnieville, Kentucky where Randi Skaggs experienced unexplained phenomena and paranormal activity. At first, Skaggs and her grandparents would only hear shuffling in the attic and the attic stairs but then it escalated quickly. One day, the family got home and noticed the basement door was open, so their whole family checked it out. Along the wall of the basement, there were footprints that looked like they were made of blood. The family learned that back in the 1940s, a wife and husband lived in the house and the wife died in a tragic accident. The husband moved out but still hung around the property. He died not long before the current family moved in and is said to be an explanation for the paranormal activity in the house. His ghost has been seen on the property with the goal to haunt any new residents.

Remember that all of these stories may be based off a true story, do not depict reality and are all just conspiracy by the community.

Feature Image Citation: “Spooky Vintage Dark” by Desertrose7 on Flickr is licensed under Creative Commons CC0 1.0 Universal (CC0 1.0). No changes were made to the image. Use of this photo does not indicate photographer endorsement of this article.