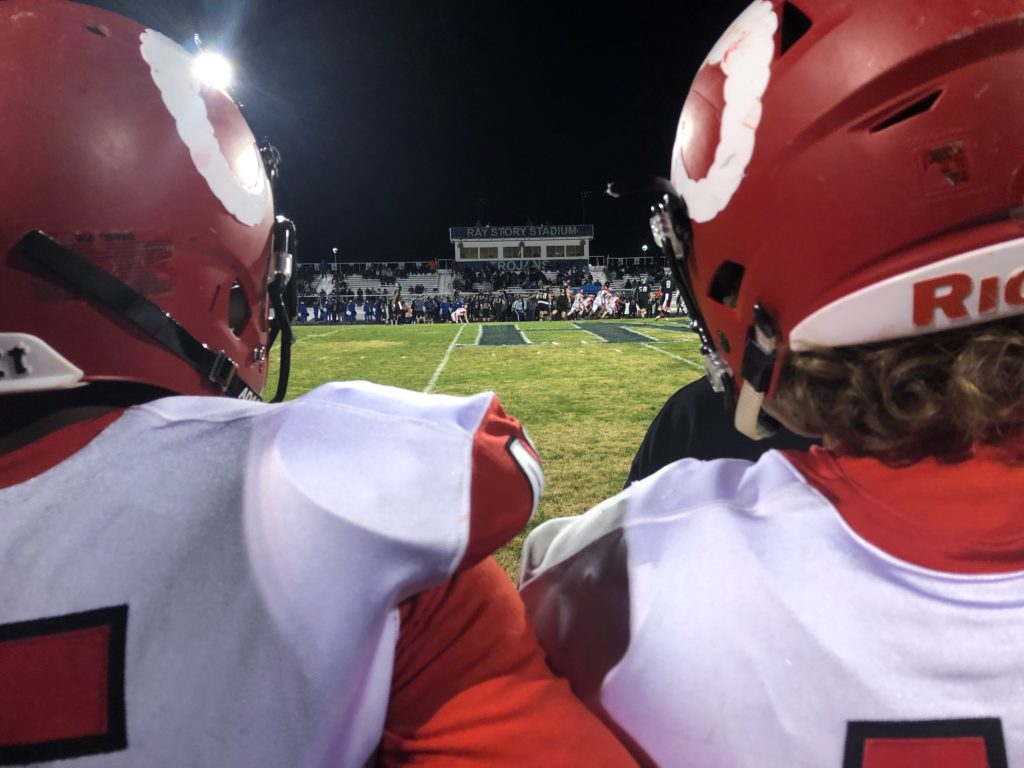 The North Hardin Trojans defeated the Manual Crimsons last night with a score of 14-0, ending the Crimsons’ playoff run and ultimately the season. Manual ended the season 6-5.

Manual struggled offensively, especially when they were within 20 yards from a touchdown. The Crimsons also had a staggering amount of flags thrown against them, hindering Manual’s offense and contributing to North Hardin’s ability to move the ball.
First Quarter
North Hardin started the game with possession of the ball, but Manual’s defense proved to fight hard at the beginning of the game, forcing the Trojans to punt the ball to Manual without making much progress down the field.

However, North Hardin recovered the muffed punt at the Manual 10-yard line, although the call was questionable as it appeared that Manual’s receiver was interfered with prior to touching the ball.

Ridiculous no call to say the least. https://t.co/2hGkzVZn1K

Manual head coach Scott Carmony called the official’s calls “awful” but added that “if we’re going to use that as an excuse as to why we lose then we’re in trouble.”

On the same drive, North Hardin’s Ramaj Adams (#6, 12) caught a pass to score the Trojans’ first touchdown of the night, making the score 7-0 after a successful PAT kick.

North Hardin attempted an onside kick to Manual, a pattern common throughout the game, but Manual scooped it up at their own 35-yard line.

After some punting back and forth Manual had possession of the ball but fumbled it, allowing North Hardin to gain possession. Manual, in return, recovered a fumble from North Hardin on the same drive.
Second Quarter
Manual made it all the way to first and goal but was pushed back by penalties and was unable to score a touchdown. The Crimsons made an unsuccessful field goal attempt.

Manual and North Hardin exchanged punts for a while, but Manual eventually recovered their own punt, putting them just 12 yards away from the end zone. Manual, however, received a 15-yard penalty, forcing them to attempt a pass which was intercepted by North Hardin.

Manual was unable to move the ball after receiving it and punted the ball just in time for the clock to expire.

“I loved our fight, but we just didn’t do anything to win. [North Hardin] had big plays,” Carmony said.
Third Quarter
Manual had possession of the ball to begin the second half but punted the ball back to North Hardin after three carries that moved them only eight yards.

Manual and North Hardin, again, exchanged punts until Manual decided to attempt a play on fourth down. This resulted in a turnover on downs and gave the ball back to the Trojans.

“We played hard and the seniors went out battling, but we came up short offensively so we couldn’t get it done. They moved the ball and we were kind of stagnant,” linebacker Alex Conlin (#10, 12) said.

North Hardin didn’t move the ball down the field and attempted to punt on fourth down, however, Manual blocked the punt which allowed the Crimsons to recover it at the North Hardin 26-yard line.
Fourth Quarter
The Crimsons’ defense continued strong through the fourth quarter, pushing the Trojans to fourth and 20 on the first drive of the quarter. Manual’s offense was unable to replicate the defense’s success, usually punting the ball back to North Hardin after three downs.

Eli Blakey (#14, 10) made an impressive catch late in the fourth quarter to put Manual 35 yards away from a touchdown but three incomplete passes put Manual on fourth down and eventually led to a turnover on downs, giving North Hardin the ball.

With less than a minute remaining in the game, North Hardin’s running back tried to run the ball out of bounds, presumably to stop the clock, however, after one play the Trojan’s quarterback took a knee, allowing the game to end.

“I’m so heartbroken. We’re coming out here next year, we’re all young. The same team next year will make up for all the losses that we got this year,” running back DeAaron Robinson (#20, 11) said.

North Hardin (9-2) eliminated Manual (6-5) from the KHSAA Class 6A playoffs, ending their season. The Trojans will play Male (10-1) at home next week.