OPINION: The White House press corps ought to dissent 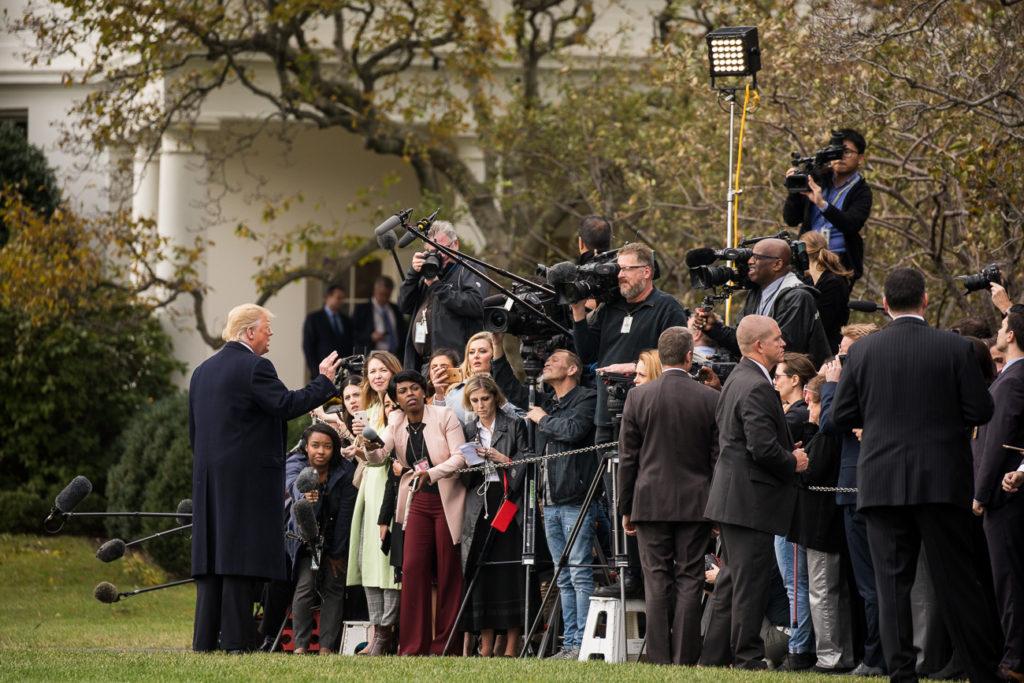 "President Donald J. Trump Departs the South Lawn" by Shealah Craighead, The White House on Flickr is licensed under Public Domain. No changes were made to the original image. Use of the image does not indicate photographer endorsement of the article.

Among headlines of midterm results, growing numbers of casualties from California fires and the approaching migrant caravan are reports of a direct attack on the press. On Nov. 7, the day after the midterm elections, President Donald Trump suspended CNN chief White House correspondent Jim Acosta’s press pass following a set of questions regarding Trump’s advertisement about the migrant caravan and his thoughts on the Russia investigation during a press conference.

While Acosta was only doing his job, the president took his questions as rude insults and unwanted critiques of his administration. This instance isn’t one of the first. The utter disrespect of the press by the president can no longer stand — it is rupturing our democracy, hurting the constitutional right to a free press and diminishing the importance of information. To respond, the White House press corps should dissent from the responsibilities of their normal jobs; they should stand in solidarity with Acosta and other journalists who have been mocked by the president.

Refuse the status quo
Time and time again, the American people have seen the president criticize the press of their necessary honesty in reporting and inquiries into the president’s words and actions. He’s made fun of disabled reporters, compiled lists of the “most corrupt and biased of the Mainstream Media” and has referred to headlines and news organizations he doesn’t like as “fake news,” “the enemy of the people,” and “the crooked press.”

As many critics of the president have said, this has become the new normal. However, the new normal is not normal in any way, shape or form. The press should never be characterized as someone or something to fear. Being a part of a news organization or any other profession that attempts to reveal information to the public will always be subject to critique, no doubt. But if the new normal is being disrespected and targeted by the leader of the free world, then how can journalists go about the day-to-day duties of reporting information?

The status quo of today’s political sphere, including all things from ideologies to media coverage, should be overturned completely. The solution could lie in more progress forward or restoring what once was. The choice is up to journalists and other persons subject to Trump’s discriminatory actions who should begin to make the change — even if that includes protesting or boycotting your own job in the press corps.
Almost censorship
The suspension of Acosta’s press pass is, supposedly, a result of many things, according to several reports from professional news organizations and White House officials. The White House Press Secretary Sarah Huckabee Sanders claimed that they revoked press credentials because Acosta “physically refused to surrender a White House microphone to an intern, so that other reporters might ask their questions.” But later reports explained that it was because of the subject matter of Acosta’s questions that forced the White House to suspend and revoke his press credentials. In either situation, the suspension of Acosta’s press pass was unprecedented and has been met with major backlash from members of the White House press corps and major media outlets.

Earlier today, CNN announced that they had filed a lawsuit against the president and other top White House aides “seeking the immediate restoration of […] Acosta’s access to the White House” on the basis of the First and Fifth Amendments. Hill Reporter suggested today that when “Trump allows the press into his news conferences, he is allowing access to the whole press. He cannot legally deny access to one journalist for arbitrary reasons.”

In any case where press credentials or revoked, suspended or put on probation, the White House press corps should be asking ‘If we can’t present the questions we want and need to ask on behalf of the American people, then how can we do our jobs properly?’ Reporting on the White House and Trump’s Administration is important, but at what expense? The combination of disrespect and deflection of questions is revealing as to how the president views the press and the information flowing to the American people about his presidency.
A united front
Protesting and boycotting the very job of covering the president is a solution that provides commentary on the state of the union in terms of the media, political ideologies of the current administration and will provide commentary on the simple fact that Donald Trump and his supporters place the role of the president above the law.

All things considered, standing in solidarity with Acosta and other journalists throughout the nation who have received rude comments, general disrespect, hate mail and even death threats because of their reporting will bring awareness to the issues that the press, in particular the White House press corps, face every day.