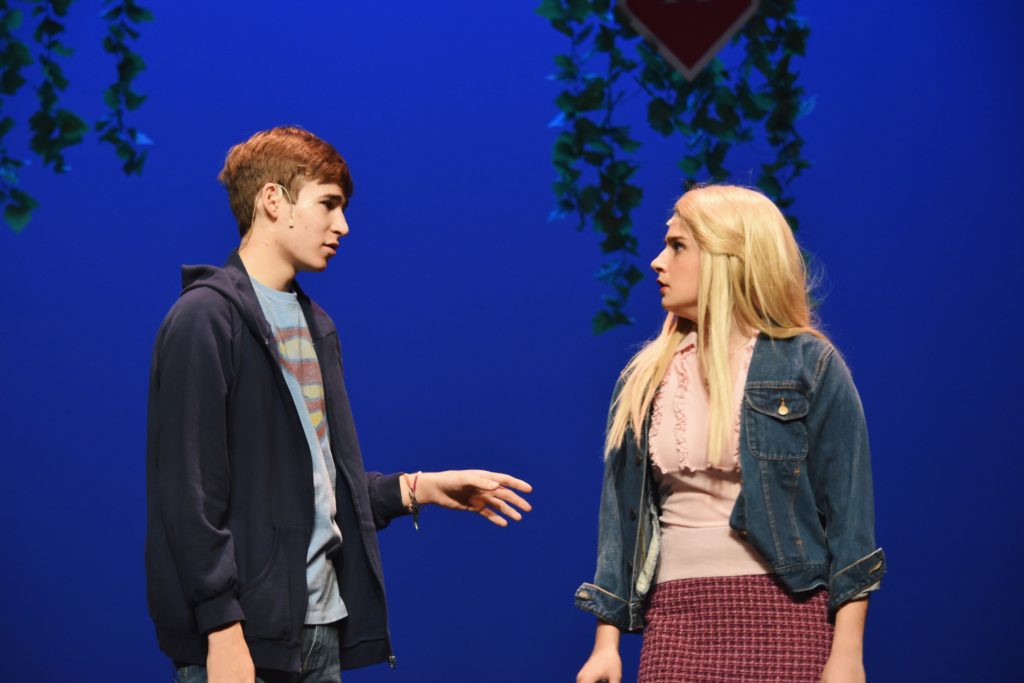 Emmett Forrest explains to Elle Woods that the "chip on his shoulder" helped him to get through law school. Photo by Piper Hansen.

Thanksgiving break is finally here and it feels like there’s finally time to catch up on life. If you need some help relaxing or taking your mind off of things this five day weekend, consider checking out one of these things:
1. Ralph Breaks the Internet
On Nov. 2, 2012, Disney released Wreck it Ralph, and six years later they decided to release a sequel. Ralph Breaks the Internet dropped in theaters on Nov. 21, 2018. The story follows the protagonists of the first movie, Ralph (John Reilly) and Vanellope von Schweetz (Sarah Silverman) as they head into the internet in search of a part to keep Vanellope’s game, Sugar Rush, from being unplugged. While in the internet, they come across the world of Disney and many figures from Marvel and Star Wars as seen in the trailers.

The movie will have returning favorites aside from Ralph and Vanellope like Felix (Jack McBrayer) and Calhoun (Jane Lynch), but will also feature new characters like Shank (Gal Gadot) and Yesss (Taraji Henson). In addition to the feature itself, make sure to stay after the movie ends for the two end-credit scenes. It is currently playing in theaters and you can click here to buy tickets from Fandango.
2. Pokémon: Let’s Go, Pikachu! and Let’s Go, Eevee!
Pokémon fans rejoice! On Nov. 16, two new games for the Nintendo Switch were released: Pokémon: Let’s Go, Pikachu! and Let’s Go, Eevee! In typical Pokémon fashion, both games released at the same time but there’s no need to worry as you’ll get the same story and adventures regardless of which game you pick up, just with different Pokémon. Both games follow the story of becoming the best Pokémon Trainer.

As with all Nintendo games, you can play this at home and on the go, but there’s a unique feature in this game unlike any other. The Poké Ball Plus allows players to bring the game into the real world. The ball fits in the palm of your hand and allows players to catch Pokémon while out in public. You can click here to buy the Poké Ball Plus with or without the game or click here to view and/or buy either game.
3. The Greatest Showman: Reimagined
The Greatest Showman hit theaters last December. Songwriters Benj Pasek and Justin Paul are best known for their work in the Tony Award-winning musical Dear Evan Hansen and now, The Greatest Showman. While it’s always nice to listen to the music directly from the movie, an album of covers from popular musicians came out recently. The Greatest Showman: Reimagined contains 13 covers of songs from the movie including Panic! at the Disco, P!nk, Kelly Clarkson and many more.

— The Greatest Showman (@GreatestShowman) November 17, 2018
Personal Favorite: As someone who normally doesn’t like cover-albums, I liked this album quite a bit. My favorite song has to be Panic! at the Disco’s (P!ATD) version of “The Greatest Show.” I grew up loving P!ATD and Brendon Urie has amazing vocals that fit the fast paced song better than Hugh Jackman’s. From the second the song begins it feels like a P!ATD song and I believe that if Brendon ever wanted to play the role of P.T. Barnum if “The Greatest Showman” ever went to Broadway, he’d do really well. In addition to this cover, I greatly enjoyed P!nk’s cover of “A Million Dreams” and Kelly Clarkson’s cover of “Never Enough.” You can listen to the album on any streaming service or buy the album both digitally and physically.

4. Legally Blonde
Omigod! The Youth Performing Arts School (YPAS) is currently putting on Legally Blonde: The Musical as their fall show. The story of Legally Blonde follows Elle Woods after her boyfriend dumps her for someone more serious and her journey to win him back by going to Harvard Law School. The story changes from winning someone over to realizing your strengths and true potential. To read more about the show, view showtimes and buy tickets, you can click here.

5.Toy Story Four and Detective Pikachu
While technically these movies aren’t out yet and won’t be until 2019, what better way to relax than watching movie trailers? We got a lot of releases this past week and it feels wrong not to mention both of these. Starting with the far darker one, we finally got our first look at Toy Story Four and if the haunting music in the background is hinting at anything, it’s a sad movie. While we don’t get a whole lot from the teaser, there’s a new character named “Forky” who will be joining the original gang. From what we have heard from the actors, it sounds like this movie is going to tear people apart.

Aside from that sadness, there’s another movie coming out next year that seems a lot more light-hearted and quite frankly adorable. Detective Pikachu will be released in May of 2019. The story will follow Tim Goodman (Justice Smith) as he teams up with Pikachu (Ryan Reynolds) who aspires to be a detective. Beyond that we don’t know much about the film but it looks funny, if not cheesy, and Ryan Reynolds already looks like he will bring a lot of character to Pikachu besides the little “pika-pika’s” we’re used to hearing.