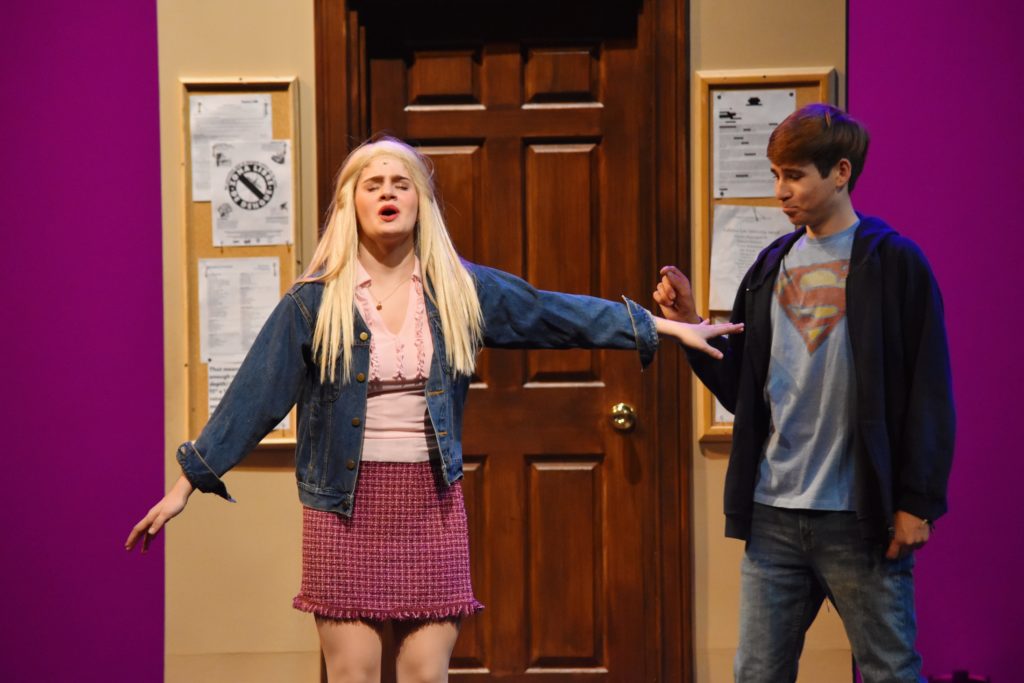 After learning that her name was on the list of interns for a prestigious law firm, Elle Woods asks Emmett Forrest to pinch her. Photo by Piper Hansen.

This post was submitted to Manual RedEye by Anabel Magers (10, J&C).

When deciding upon a title for the fall musical, “Legally Blonde” was not the type of play that Director Ms. Katie Blackerby (YPAS) was hoping for.

“I thought, ‘Why would we get into that?,’” Blackerby said. She was very hesitant about putting on the title because of its difficulty. “We knew that this would be incredibly challenging, but we also knew we had the talent for it.”

This performance differs from past YPAS productions because of its high difficulty and commercial title, as well as the varied experience of students performing.

“I don’t really know how I felt,” Nick Metry (12, YPAS) said. “It’s kinda a lot different than a vocal thing.” Before “Legally Blonde” Metry had never been in a play before but he played Emmett, the male lead, in the opening night performance.. “I went out, and at first I was nervous, but I kind of warmed up to it halfway through the show.”

On the other hand, Roman Tate (9, YPAS) is very experienced with the field of musical theatre, after performing in “Sophisticated Ladies” earlier this year. He sacrificed around half of his middle school experience to be homeschooled so he could focus on his work as a performer.

The cast copes with “game-day nerves” in a vast variety of ways. Before a big performance like this, they get together and do a “shake-down” to rid themselves of any excessive stress.

“It’s important to be a little nervous,” Lillian Ramirez (10, YPAS) said “It keeps you on your toes.”

Ramirez rarely feels anxious before going on stage, but when she does feel tense about an upcoming performance, she tries to amp up her nerves before a rehearsal, so when her time to perform comes around, she is used to the feeling.

The show is projected to be a big hit in the community, and is said to be the largest that this production team has put on. Despite the obstacles of putting on a show of this magnitude, the cast and staff are beyond excited to present the show and spread its message.

“You think that it’s a fluffy, silly little piece, but its actually not — it’s very empowering for young women” Blackerby said. “I think that it’s just right at this point.”