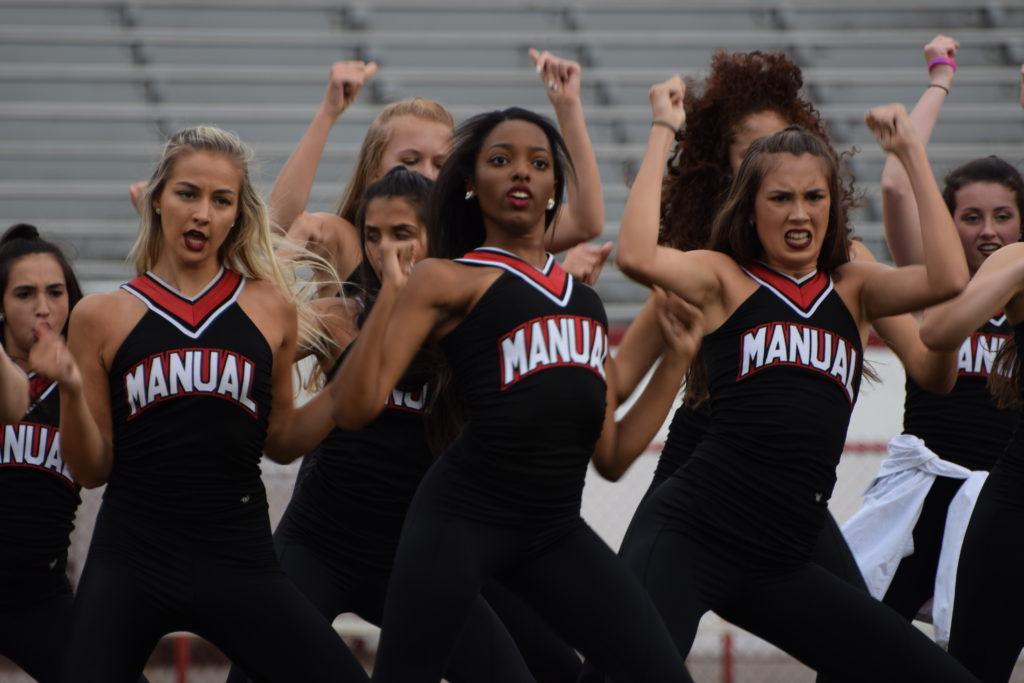 The Dazzlers perform at a football game. Photo by Pieper Mallett.

This post was submitted to Manual RedEye by Olivia Bohler (10, J&C).

The duPont Dazzlers dance team won first place in their division at a regional competition at Valley High School on Nov. 18.

The official competition started at noon, and the Dazzlers performed a jazz routine at 1 p.m. and a hip-hop routine at 3:30 p.m. that they have been working on since September.

“We work hard to always be innovative with what we put in our routines,” Kirstie Bertẽ, one of the Dazzler coaches said. “We are always looking for new ways to come up with something the crowd hasn’t seen.”

“The dances can be pretty challenging,” Dazzler Olivia Sebastian (10, YPAS) said. “Our coaches really want to push us to be the best we possibly can be so we rarely settle for things and often dedicate ourselves to achieving what started out as a nearly impossible task.”

There are two coaches for the Dazzlers, “both have to take off work for competitions and games,” Bertẽ said.

The Dazzlers themselves have to shift their schedule as their practice has nearly doubled during competition season, going from practice 10 hours a week to 14.

As far as this competition goes she, “has full confidence that the Dazzlers will advance to state in both jazz and hip-hop,” Coach Bertẽ said.

The team that performs at the basketball and football games is usually separate from the competition, as it has more participants. However, this year everyone who participated in the game team qualified for the competition team.

Sunday’s regional competition is a deciding factor for whether or not they will make it to Nationals in Orlando. This is their last competition every year.