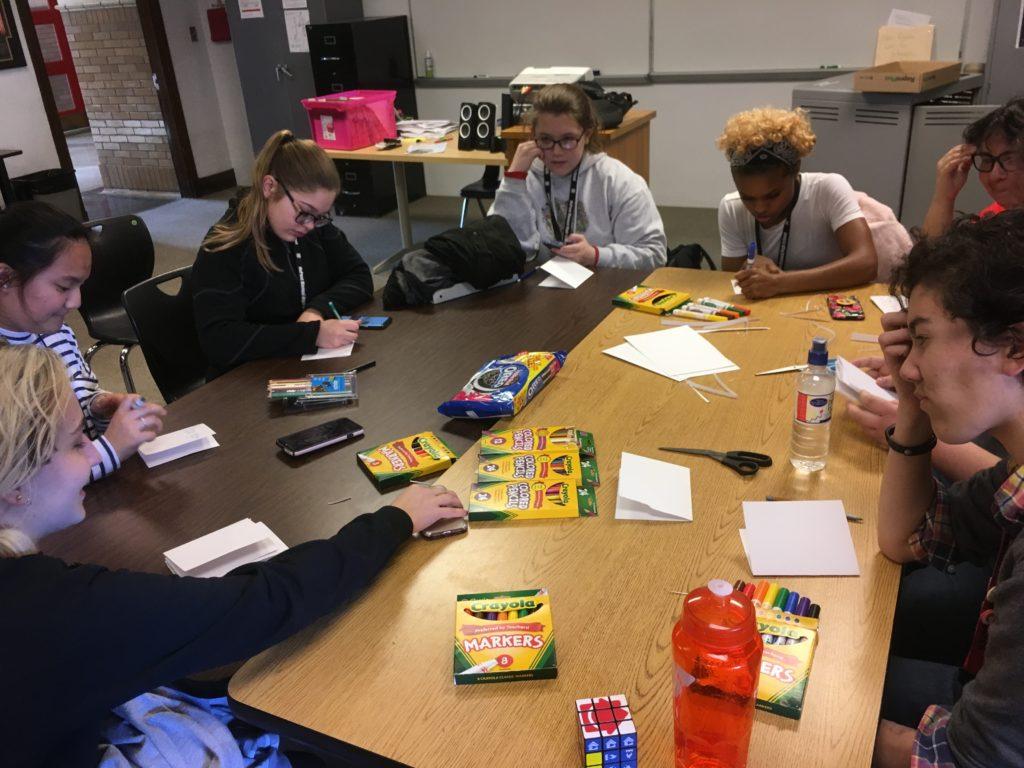 The RAMdom Acts of Kindness Club at Manual is an organization that aims to improve the days of Manual students. They put up positive messages on sticky notes around the school, give out care packages during finals week and make sure that no one is sitting alone at lunch.

Last year they gathered money to give gifts to the custodians and teachers. They also raised a lot of money for a Lady Gaga foundation, and were able to give away Lady Gaga tickets.

Edison Pleasants (12, VA) is one of the two presidents of the club.

She said that the goal of the club is as simple as making people smile.

“Our goal is to make a student feel good at random times,” Pleasants said.

The RAMdom Acts of Kindness Club was created last year by Mrs. Thayne Bruszewski (English) who wanted to bring a kindness based club to Manual after she saw one at her daughter’s school.

“It seemed like a really good idea, just based in spreading positivity, and doing kind things for other people, whether that’s celebrating people in their good moments, or boosting them up in their bad moments,” Bruszewski said.

Anthony Taylor (12, VA) is the other president of the club. He joined the club for a variety of reasons.

“I try to be big on actively being kind to people because you never know who needs that little bit of kindness in their day to make them feel better,” Taylor said. “So I went into it hoping there would be volunteer opportunities involved and the chance to make people smile.”

Emily Slaven (11, HSU) joined with a particular project in mind.

“I wanted to start a Make a Friend table,” Slaven said. “I used to sit alone at lunch and wanted some people to help by participating and sitting with people who sit alone.”

The RAMdom Acts of Kindness Club works together to make their ideas turn into reality.

“We come in with projects in mind and bounce ideas off one another until we come up with a concrete and workable plan to put into action,” Taylor said.

“We have a lot of new members that have some great ideas,” Pleasants said. “Our club is growing slowly, but I feel like soon enough it will be a large club and I’m proud to be a part of it.”

The club wants to continue growing and attracting new members. They are also planning to expand their acts of kindness into the whole Louisville community as well.

“One thing I do want to improve on this year is outreaching to the community outside of school,” Taylor said. “Outside projects we’re work-shopping are like helping pass out food to the homeless or volunteer at animal shelters, I definitely want [that] to become a reality.”

Taylor is graduating at the end of this year, so he is working hard to make sure that the club carries on after he’s left.

“I want to leave the club this year in good hands and leave them with bigger plans to follow through on next year,” Taylor said. “ I also want to spark excitement and passion for this club in my underclassmen so that when I leave, I know the club will continue to do good things.”